When Canadian energy ministers met recently in Kanananskis, Alberta, a former top advisor to Prime Minister Stephen Harper, now under investigation by the RCMP, was nowhere to be seen. 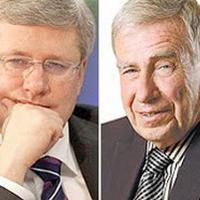 But the oil sands-friendly "national energy strategy" pushed hard by the Albertan and federal governments had Bruce Carson's fingerprints all over it, green observers say.

"He really laid the groundwork for what happened in Kanananskis," Greenpeace Canada's Keith Stewart, who has blogged extensively about Carson, told the Tyee. "The ghost of Bruce Carson was definitely at that meeting."

If the 66-year-old Carson's presence was vague and shadowy, says Stewart, so too was a communiqué on Tuesday from the federal ministry of natural resources, containing such language as "collaborative approach", "shared vision", "energy information and awareness" and "highest standards of environmental protection."

But what really spooked green groups across the country -- and Ontario's own energy minister -- was the following: "Alberta's oil sands are a responsible and sustainable major supplier of energy to the world."

For Stewart and others, here lay the heart of a sophisticated public relations strategy nearly a year and a half in the making -- and one spearheaded by an advisor formerly so close to Prime Minister Harper that he had his own nickname, "the Mechanic."

Now the subject of three federal inquiries -- including an RCMP investigation -- Carson has all but dropped from public life.

Yet the energy ministers' meeting in Kanananskis, with its calls for a "national energy strategy", is a culmination of sorts for the work he's been doing for years.

Carson was once one of Prime Minister Harper's most trusted advisors, known as "the Mechanic" for his ability to fix trying, or difficult, situations.

Shortly after his official resignation in 2008, he became executive director of the Canada School of Energy and Environment, a University of Calgary research group accused, under his leadership, of promoting Tory oil sands policies.

From April 8 to 10, 2010, Carson helped host a series of discussions, with input from top oil industry insiders and environmentalists, known as the Banff Clean Energy Dialogue.

The meeting became the genesis for the idea of a "national energy strategy" -- one that would address "growing consumer concerns around energy security, trade protectionism and environmental threats," according to a conference paper.

"Without a coherent approach to energy development," the paper read, "any chance of meeting our climate change goals is virtually impossible."

In setting up the conference, Carson deliberately excluded government officials.

"We really felt, given the history around this public policy theme, that it really had to start from outside government," Carson told CBC news.

What the news report didn't mention was that in March 2010, three weeks before the Banff Dialogue, Carson had met quietly with the Canadian Association of Petroleum Producers -- the country's foremost oil patch lobby -- and top ranking officials from the Alberta government and Natural Resources Canada.

The purpose of their meeting: to discuss how oil industry players could go about "'upping their game' on oil sands outreach and communication as part of a renewed strategy," according to briefing notes obtained by Climate Action Network Canada.

"You can communicate all you want," Carson explained later to Postmedia. "But if you have nothing to communicate, you're not going to go anywhere, so the idea was (that) we had to really up the environmental game."

Pressing for pipeline across BC

Only days after the Banff Dialogue, Carson appeared before a Canadian Senate committee on energy and the environment, making the urgent case for an oil sands pipeline to B.C.'s coast.

"It will be difficult, given the atmosphere and regulatory approach in which we now live, to see a pipeline being built any time soon," Carson told the committee, making implicit reference to Enbridge's Northern Gateway project. "The work you are doing could address that."

In September 2010, Carson brought his idea for a "national energy strategy" directly to Montreal for the annual meeting of Canadian energy ministers.

Over the coming months, major energy industry players, including the president of Shell Canada, picked up the call, arguing a national strategy was essential for Canada's transformation into an energy superpower.

"No doubt Carson was instrumental in getting the ball rolling, and then others jumped in," Matt Price, campaigns director for Environmental Defence, told the Tyee.

For now though, the legacy of Kanananskis, and whether it could be considered a victory for Carson's vision, is unclear.

With Tuesday's communiqué, the Albertan and federal governments may now have a blueprint for actually crafting a "national energy strategy," one which they've already made clear would be used to help expedite approval of projects such as Enbridge's Northern Gateway pipeline.

"My initial reaction was, 'What planet are these people living on?' And if it's ours, we're in trouble," Price said.

"Carson probably would have been moderately pleased by the outcome," Stewart told the Tyee.

"But it wasn't the ringing endorsement of an oil sands-driven energy strategy that Alberta was certainly hoping for."