Northwest Ocean Acidification: The Other Cost of Carbon Pollution

[Editor's note: The Tyee is pleased to bring you the second in an occasional series of articles, 'Northwest Ocean Acidification: The Other Cost of Carbon Pollution', produced by the Sightline Institute.]

Five years ago, many scientists probably thought they'd never see large pools of corrosive water near the ocean's surface in their lifetimes. 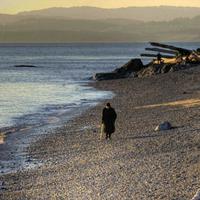 Why Ocean Acidification Matters to You

Basic chemistry told them that as the oceans absorbed more carbon dioxide pollution from cars and smokestacks and industrial processes, seawater would become more acidic. Eventually, the oceans could become corrosive enough to kill vulnerable forms of sea life like corals and shellfish and plankton.

But scientists believed the effects of this chemical process -- called ocean acidification -- would be confined to deep offshore ocean waters for some time. Models projected it would take decades before corrosive waters reached the shallow continental shelf off the Pacific Coast, where an abundance of sea life lives.

Until a group of oceanographers started hunting for it.

"What we found, of course, was that it was everywhere we looked," said Richard Feely, an oceanographer at the National Oceanic and Atmospheric Administration's Pacific Marine Environmental Laboratory in Seattle, Washington, who was one of the first to recognize the trouble ahead.

The researchers found surprisingly acidic water -- corrosive enough to begin dissolving the shells and skeletal structures of some marine creatures -- at relatively shallow depths all along the west coast, from British Columbia to the tip of Baja California. Researchers hadn't expected to see that extent of ocean acidification until the middle to the end of this century. But in a seasonal process called "upwelling," summertime winds pushed surface waters offshore and pulled deeper, more acidic water towards the continental shelf, shorelines, and beaches.

Or as one Oregon State University marine ecologist put it: "The future of ocean acidification is already here off the Oregon Coast."

Effects are bizarre to beneficial

Acidifying water poses a threat to marine animals, especially ones that need calcium carbonate to build shells and skeletons. In the Northwest, that includes everything from geoducks, a giant clam that supports one of the region's most valuable commercial fisheries, to krill, the tiny shrimplike creatures that give salmon flesh its distinctive pink color and feed rockfish, seals, and whales.

Other effects of low pH water on marine creatures range from lethal to bizarre to beneficial. In laboratory studies, clownfish exposed to more acidic seawater have lost their sense of smell and ability to find habitat, Antarctic krill embryos failed to hatch, northern abalone larvae from British Columbia died, squid didn't want to move, and some eelgrass grew more abundantly.

Then, the oceanographers announced another startling discovery last summer. On the surface of Puget Sound, they found waters with a pH of 7.7, roughly on par with the most acidified waters found in the earlier study along the West Coast. In the deeper waters of southern Hood Canal, the acidity level was even higher -- the pH plummeted to 7.4.

It was some of the most corrosive seawater recorded anywhere on Earth.

To put those numbers in context, the pH scale runs from 0 to 14, with pure distilled water a perfectly neutral 7. Anything below 7 -- battery acid, coffee and orange juice -- is acidic, and anything above 7 -- eggs, toothpaste, and bleach -- is basic, or alkaline.

Seawater is not an acid, because it measures above 7 on the scale. But as the world's oceans have absorbed more carbon dioxide pollution, those waters have moved towards the acidic end of that scale. Since the Industrial Revolution, the average pH of surface seawater around the globe has dropped from 8.2 to 8.1.

That small numerical change may not seem like a big deal, until you realize that the pH scale is logarithmic. Each whole number represents a tenfold increase in acidity or alkalinity. For example, a lime with a pH value of 2 is 100 times more acidic than a tomato with a pH of 4.

So the world's oceans on average have already grown 30 per cent more acidic since we began burning fossil fuels in abundance. But there are also geographic hotspots for ocean acidification, where currents and chemistry combine to make the problem worse. For example, the 7.7 pH level already found at the surface of Puget Sound (and near the surface along the west coast) is roughly 100 per cent more acidic than the current worldwide average.

Not just a coral reef problem

Summertime conditions in Hood Canal routinely kill fish, octopus, crabs, shrimp and other creatures by the hundreds or thousands. Water becomes more acidic, and oxygen levels drop so low that fish cluster near the surface and eels visibly pant.

The corrosive waters lurking in Hood Canal aren't the result of ocean acidification alone. Natural processes and other forms of pollution also contribute to low pH values there. For instance, Hood Canal is naturally rich in phytoplankton. When it dies and decomposes, it sinks and releases carbon dioxide. That process lowers the pH and also robs the water of oxygen that everything from fish to spot prawns to eels need to survive. As with many estuaries, nutrient-rich pollution from lawns, septic tanks and farm fields makes the problem worse.

So how much of the low pH conditions in Hood Canal can be attributed to ocean acidification versus other processes? Researchers estimate acidification is to blame for 24 to 49 per cent of the drop in pH in the deep waters of Hood Canal, compared to pre-industrial levels.

If carbon dioxide pollution continues, they expect ocean acidification to become an even more powerful factor, accounting for 49 to 82 per cent of the pH decrease in Puget Sound waters. That means the manmade carbon dioxide emissions from cars and smokestacks will have a growing influence on how acidic that water becomes in the future.

Already, seawater corrosive enough to dissolve shellfish larvae is showing up within spitting distance of beaches and commercial hatcheries. As NOAA oceanographer Feely puts it: "Our decision to work in Puget Sound was to say, 'Don't think of ocean acidification as an open ocean problem or a coral reef problem.' Start thinking about it as a multi-stressor problem in estuaries where you have combined effects of increased nutrients and increased carbon dioxide."

And do the low pH levels found in Puget Sound mean that animals there have grown accustomed to more acidic waters and are possibly better prepared to adapt to the changes ahead? Or that creatures in this low-pH environment are already so stressed that they'll be among the first to wink out?

This is the big question we as scientists have to address. We don't know.

In our next article, we'll visit a lab where local scientists are working to figure that out.