The oil hit Louisiana's Barataria Bay late last May, lapping onto shore in great dark ribbons and rust-coloured gobs. It had travelled more than 150 kilometres, riding eastward tides from BP's ruptured Macondo wellhead. Local fishermen and their families had suspected for a month the oil would come. Still they'd still hoped for a reprieve. Maybe the exploded offshore platform would be capped in time, some imagined, allowing the fragile wetlands, marshes, bayous and lakes they called home to replenish the Gulf of Mexico, bringing new life to its fouled waters. 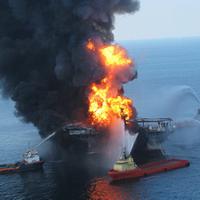 What Happened on the BP Oil Rig?

Then on May 25, commercial fisherman Mike Roberts received a phone call at home from his friend out on the water. "He said, 'You gotta come out here -- you're not going to believe this,'" Roberts recalled recently, speaking to an oil spill forum in Vancouver.

The fisherman, his wife, their grandson and another companion hopped into a speedboat. Approaching Barataria Bay, the sharp smell of crude oil became "so overpowering it could knock you out." Roberts readied himself for an onslaught.

Eight months later -- and 200 days after the July 17 announcement that the well was finally capped, two academics now wonder what wider lessons, if any, were drawn from one of the worst environmental disasters in United States history.

In fact, as the researchers explain in a new paper obtained by the Tyee, last summer's oil spill may have unwittingly strengthened North America's dependence on the planet's riskiest fossil fuels.

Every once in a while, a cultural event comes along so jarring that it challenges deep-rooted ideas or practices in society, resulting in wide-scale changes. One might point to the 1978 Love Canal crisis, where buried toxic waste contaminated 100 Niagara Falls homes and a public school. Intense media coverage drew graphic links between chemical exposure, birth defects and cancer. The crisis induced broad new environmental regulations and a burgeoning green movement rallied around it.

For University of Alberta business professor, P. Devereaux Jennings,  and his University of Michigan colleague, Andy Hoffman, such events are known as "cultural anomalies". They're similar to scientific discoveries -- think for instance, of James Clerk Maxwell’s observations about electricity -- which blow apart prevailing theories and wisdom. The Gulf oil spill may seem an obvious candidate. Yet a new study co-authored by both academics is raising doubts about any Love Canal-type legacy.

But while this particular disaster came "close to acting as a catalyst for deeper change," Hoffman and Jennings write, "true change in our approach to handling issues related to oil drilling, oil consumption and environmental management have yet to occur."

So what have we learned, exactly?

'It goes on for hundreds of miles'

Mike Roberts and his companions hit oil almost the moment their speedboat entered Barataria Bay. For 35 years, Roberts had made much of his money fishing these waters. He figured the glassy sheen lapping against their boat couldn't stretch too far. But no matter which direction they headed – to Roberts' favourite shrimping spot, to Queen Bess Island's bird nesting grounds -- they couldn't escape it.

"Man, where’s the end of this oil?" Roberts asked a young shrimper on clean-up duty later that day. "It doesn't end," was his reply. "It goes on for hundreds and hundreds of miles into the Gulf of Mexico."

Though Roberts considers himself a tough guy, he cried that day, trying to hide the tears from his grandson Scottie. It was the first time in 30 years he'd broken down like that, ever since his dad died.

For a day by day history of the Deepwater Horizon Oil spill disaster, click here.

For months the oil kept sloshing into Barataria Bay, even after BP's rig was announced capped on July 17 and then officially sealed for good in mid-September. The fumes were so dense in the humid air that rainstorms left a black film inside people's air conditioning vents.

"In some ways [the spill is] worse today," one coastal zone director said late last November, "because the world mistakenly thinks all the oil has somehow miraculously disappeared."

In the Gulf itself, chemically dispersed oil now floats far beneath the surface. The toxins it carries could someday cause "commercial fishery collapses and even species extinction," as Naomi Klein reported recently from aboard a scientific vessel. Generations from now, Hoffman and Jennings wonder, what will people have taken away from all this?

Last spring, images of oil-drenched pelicans helped raise fundamental questions about North America's ever-riskier quest for fossil fuels. (Click here to read a Tyee report about the trend). Why were BP and other major oil companies drilling so deep in the first place? How were their activities tied to environmentally risky developments in Alberta's oil sands and the high Arctic? Is eco-system destruction an acceptable consequence of our society's addiction to fossil fuels?

By summer's end, no major environmental voice had emerged to keep these larger issues relevant, Hoffman and Jennings argue. Media attention increasingly focused on the battle lines drawn between President Obama and the BP leadership. The big questions became technical and political. Were BP's crews succeeding in capping and containing the spill? Was Obama being tough enough?

"These commentaries," Hoffman and Jennings write, "were never elevated sufficiently to challenge the institution of oil exploration and production."

That perhaps helps explain the U.S. government's decision to give the go-ahead for 16 deep-water drilling proposals earlier this January. Or why the final report of the National Oil Spill Commission called for changes that would "make American offshore energy exploration and production far safer," proposing new ways to charge oil companies for their pollution.

Hoffman and Jennings don't doubt the value of such initiatives. But the lack of wider focus could unwittingly confound visions of a clean energy future, Jennings told the Tyee.

"When you have a dramatic event and it doesn't create a rupture or a major change of perspective -- in a way that inoculates you against future change," he said. "You see people focused on the BP spill, they know what it's about, but they don't know what conclusion was drawn from it."