Thirty-two years elapsed between the invention of the Saskatchewan Conservation House and the erection of Austria House in Whistler (structures this series profiled in the previous two stories). 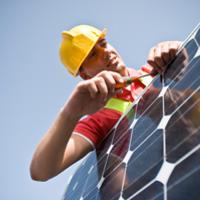 Making BC a Green Jobs Machine

Passivhaus buildings -- which include schools, offices, apartments as well as a growing number of renovated structures -- use 90 per cent less energy for heating and cooling than conventionally built buildings. Since buildings consume up to half of all energy in North America, the prospect of a 90 per cent reduction poses what green building advocates believe is the most affordable way to reduce energy costs and slash the emission of greenhouse gasses.

Europe has embraced the idea. The continent already has more than 25,000 Passivhaus certified buildings. And by 2020, every new building in the European Union must be a "near zero energy building." With that shift has come a steep rise in new green construction jobs.

Given that both the City of Vancouver and the Province of British Columbia have committed to cutting greenhouse gas emissions by 33 per cent by 2020, it's worth asking: Is B.C. ready for Passivhaus building codes?

On the Rideau, a Passivhaus duplex

Canada's second Passivhaus was certified last November. It's a three-storey duplex overlooking the Rideau River in Ottawa. The building sports a green roof (with 12 inches of soil for gardening), a heat recovery ventilator, a geo-thermal system and a rainwater cistern.

Chris Straka designed the building, and lives on one of the two 1,650 square foot residences.

"I focused my attention on the building's envelope, using triple-glazed windows, a combination of foam insulations, and I sealed the house carefully to avoid thermal bridges that would transfer energy across the outer walls. All of this plus a south-facing rear wall of windows overlooking the Rideau River, keeps the cold out while inviting heat inside," he said. (Photos here.)

Straka built his duplex, which is also seeking platinum certification under the LEED for Homes program, without importing high-tech windows from Europe.

"I knew that a very high performing building could be created using Canadian materials and mechanical systems," he said.

Stratka said his house cost about 10 per cent more (per square foot) than a conventional house. He estimates that expense will be recovered through energy savings within six to 10 years.

"Any custom home in Ottawa will cost about $225 a square foot to build," Stratka said. "For $250 a square foot, you can have the ultimate in energy efficiency."

Stratka is already at work on another Passivhaus/LEED Platinum design, which he said will be built for the same construction cost as a conventional custom home.

At least a dozen more Passivhaus building projects are underway across Canada. In British Columbia, the list of projects on the boards includes two multifamily homes in Vancouver, a winery in the Okanagan, and a warehouse on Vancouver Island.

In Whistler, an affordable Passivhaus

Duerfeld had been investigating BuiltGreen and the R-2000 standard, but was discouraged by what he described as the heavy use of foam and other chemical-laden building products in many of those homes. The Austrian emphasis on wood products changed his mind about energy-efficient building.

"So we looked at this [Austria House], and we said, 'You can actually build an airtight house that is a wood-based house. You don't have to build a petrochemical-based box.'"

Duerfeld's company bought a lot through the Whistler Housing Authority in a new subdivision called Rainbow, where he expects to break ground in April on a Passivhaus duplex. The side-by-side duplex was designed by Alex Maurer of Marken Design. The housing authority expects the Passivhaus homes to be affordable (by Whistler standards).

"That is really going to be the challenge," Duerfeld said. "If I build a custom house for someone in Whistler, and I have a $2 million budget, I know I can build that person a Passivhaus. Here, our challenge is going to be to build an affordable envelope."

Duerfeld isn't yet certain what the homes will cost. He plans to invest in insulation and airtightness, while eschewing expensive alternative energy systems. And, like Straka, Duerfeld plans to build using local materials.

"That means made in B.C.," Duerfeld said. "We're going to try to do it so that almost everything can be locally based."

"The other thing we are looking at is doing this in modules," Duerfeld continued.

"If I was only ever thinking of doing one house, I wouldn't think of doing it in modules. But we're thinking that this is a new little business we might get into. We have a shop up north. We have space where we could actually build walls," he said.

Thus the Whistler duplex will serve as a pilot project where Duerfeld plans to showcase the walls he will prefabricate in Williams Lake.

"Ultimately, our goal is we will get to the point that we would become a subcontractor for a developer or a builder. We would build the envelope. We would test the envelope. And then we're out of there," Duerfeld smiled. "We'd provide a quick build at a fixed price."

Duerfeld's plan is to prefabricate a wall system that would combine a two-by-four inch service wall inside a two-by-ten insulation wall.

The exterior (2x10) wall would be insulated with rockwool, and sheathed with oriented strand board. The inside sheet of OSB will double as an all-wood vapour barrier. "This is our insulating and structural wall," he said. "We won't penetrate it. No plumbing, no electricity there." 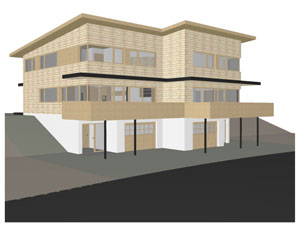 The interior (2x4) wall would contain all the mechanical systems. "We won't pre-insulate this. We can run all our plumbing, our wiring, anything else," Duerfeld said. "When we finish the wall, just before we put the drywall on, we'll insulate that as well."

"We have more R-value in this wall than the Austrians have in that wall," Duerfeld said. "Our philosophy is: We are going to show that you can do this using Canadian products and Canadian labour."

In the European Union, all new buildings must be "nearly zero energy" by 2020.

"They're headed toward a Passivhaus-equivalent building code. Your thermal envelope is going to have to be this good," Duerfeld said. "I think that will slowly follow here, too."

Guido Wimmers is a Dutch architect who now works as a designer in Vancouver. He wrote the city's Passive Design Toolkit for homes, and he trains Canadian architects, builders and engineers through the Canadian Passive House Institute.

"Quite a few European cities are already doing [Passivhaus or near-zero building codes]," Wimmers said. "By 2020. A lot, actually."

Wimmers shares Duerfeld's view that Canada is ready for Passivhaus.

"The time is right. LEED has sensitized the market over the last few years. They did an awesome job in educating people. My personal opinion is just that they have not focused correctly on energy, but it doesn't matter. Overall, they have changed the building industry," he said. "Now, the market is open for the next big leap, for something more. And they've seen that Passivhaus is fairly successful."

Wimmers, who consults on numerous Passivhaus projects, expects to see between five and 10 more Passivhaus buildings in B.C. this year. "I could imagine that a year later we are already at 50. And double that the following year."

He watched it happen in Europe.

"These ideas transformed the industry in a relatively short period of time," he said, adding that the rate of job creation in Germany was staggering.

"The automobile industry in Germany is huge, as everybody knows. We're talking about Mercedes, BMW, Audi, Porsche, Opal, Toyota, Volkswagen," he said. "By 2008, there were more jobs in energy-saving technologies and the renewable energy sector than in the whole German automobile industry."

Wimmers sits on a committee that advises the City of Vancouver on its plan to become the Greenest City in the world by 2020.

He paused when asked whether he believed the city should adopt Passivhaus-like standards for its building code.

"Over time, yes," he replied. "But I think the industry is not set up to accept this as a general rule by 2020. We cannot implement it over nine years. That's too much."

In Europe, he noted, "They've been working on this for 20 years."

Asked what he thought Vancouver should do to meet the green building component of its promise to reduce community greenhouse gas emissions by 33 per cent (from 2007 levels) by 2020, Wimmers replied promptly and in detail.

"First of all, push the code. Make it more challenging. So that legally allowed worst-case scenario? Just push it a little bit higher. Raise the bar," he began.

"Then educate. Because without education, it's not gonna happen," Wimmers continued.

"Then, it is a money issue. As long as we get electricity more or less for free, where is the motivation to save energy?" he asked. "The city could come up with a very provocative model, and put some tax on our electricity ... is not a very popular tool. But it is an extremely efficient one," he said.

"And finally, make it simple. For every new bylaw, throw away 10 existing ones. Just get rid of all this jungle of bylaws and make them clear and performance-based," like the Passivhaus standard. "Nothing proscriptive, only performance-based."

Wimmers added that, based on the feedback he receives at his Passivhaus training seminars, he believes the green building market is ready.

"I think the time is right," he said. "I'm convinced that Passivhaus is about to take off in Canada."