Way up above the headwaters of the Iskut River, in an alpine meadow bursting with August wildflowers, eight demon-horned rams appear suddenly. 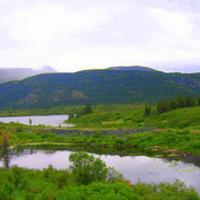 Time to Get 'Wacky' Again: The Northwest Transmission Line

The two parties -- two humans and eight Stone's sheep -- all freeze on the spot, eyes locked. Paul Colangelo, a wildlife photographer hoping for just this luck, drops to the ground, crawling over a ridge and out of sight.

The Stone's sheep he pursues are the charismatic mega-fauna of Todagin Mountain in the upper Stikine River watershed (see map below). Elite hunters from all over the globe come here every year, about 1,700 kilometres north of Vancouver, paying upwards of $30,000 for the opportunity to take down a single ram, a cull considered sustainable in these parts because the sheep are more abundant here than anywhere else.

They are equally numerous directly to the northeast, which also happens to be the site of Imperial Metal Corporation's ongoing summer drill program at its proposed Red Chris open pit copper/gold mine. The company has five drilling teams working all out, and word in the valley is they are finding more gold the deeper they drill; but as with everything I hear about mining ventures this summer spent exploring B.C.'s northwest, it's hard to separate fact from cash-lubricated fiction.

While Colangelo chases sheep, I climb to the summit to scan the valley below (see video, below): three cigar-shaped, impossibly-blue lakes connected by the braided, meandering Iskut seem to encompass the entire valley bottom. Skirting their edge is the single-track Stewart Cassiar Highway; out of sight to the east, not far from where I stand, are the collective headwaters of the Nass, Stikine and Skeena rivers.

I'm returning to this area after a year's absence, during which time the optimism has returned to the northwest mining and exploration community, thanks to a massive provincial and federal infrastructure subsidy that will see the electrical grid extended into this remote corner of B.C. Cheap grid power promises to make economical many of the low-grade copper deposits that have been known about for many decades, but "sterilized" due to remote geography.

The new power source will change that equation, opening the way for a potential wave of mining in these parts.

The Red Chris open-pit mine is among the most advanced projects in the region, and one that will draw nearly 40 megawatts from the power line to pulverize 30,000 tonnes of rock a day. Small by international standards, Red Chris promises to generate at least 250 full-time jobs over the next 30 years, but that's not all: more than 180 million tonnes of tailings and an estimated 300 million tonnes of waste rock will be created over its life, requiring acid-rock drainage treatment for at least 200 years.

And like the recently rejected Prosperity gold/copper mine near Williams Lake, it plans to bureaucratically "reclassify"fish bearing waters as tailings ponds, including the damming and diverting of streams. Unlike Prosperity, this project in the Upper Stikine watershed is likely a go.

"Todagin mountain is an epicentre to an area that certainly equals Yosemite or Banff in terms of its natural values and its potential as a destination for high-end travel and tourism," says author, anthropologist and National Geographic explorer-in-residence Wade Davis, who has lived seasonally on nearby Ealue lake for nearly 30 years.

"I find it just extraordinary," he says, "that someone can cobble together a company with less history than my dog and just by promising some revenue flow to the government, secure the right to transform a place for their own private gain for all time. It's even more remarkable that in the calculus that rationalizes the industrialization of the wild, there's not a single line item that takes into account the value of the land being left alone." [Hear the full interview here.]

By sunset, Colangelo and I return to our headquarters at Tatogga Lake Resort and we're not alone. Located on the highway just minutes from the turn-off to Red Chris, this former hunting lodge has been transformed into a mining camp, complete with busy helicopter pad and floatplane base. A year ago, it was a quaint refuge for Swiss and German tourists visiting the backcountry; this year the scene is more reminiscent of the HBO series Deadwood -- overrun by scores of cussing, bone-weary contractor mappers, drillers, geologists, archaeologists and prospectors.

The scene is also evocative of the early 1960s, when an ambitious U.S. company called Kennecott Minerals performed a wide exploratory sweep of the Stikine country, discovering many of the copper deposits now being unlocked. At the time, the great American essayist Edward Hoagland visited this very region, describing "a frank new air of rapine" not unlike that of today:

"I... found the circle of wilderness taking a terrific pasting. The damning and flooding, the logging and road building, the hundred helicopter bases were leaching it from every angle."

Since my last visit, the change in tone of our host, a peroxide blonde, no-nonsense bear of a woman named Teena Wright, is most glaring. Last year she railed against how mining and the transmission line would impact the wilderness-dependent tourism businesses, particularly the guide-outfitters who have employed local natives and been sustained for 60 years by the sustainable resource of Stone's sheep.

"The people who come here come for one reason," she said at the time. "There are no services, and there is virgin boreal forest. If it becomes a mini-Alcan, the [Stewart-Cassiar] highway becomes just another highway."

But in August 2010, flush with cash from the ever-expanding tent village in her RV campground, she echoes what I hear from other tourism operators on the Highway 37 this year. "The miners were the only thing that saved us this year."

Wright and her husband are doing more than just servicing the mining industry this summer, they are banking on it. Construction has begun on their new motel directly next door to the lodge, which should be completed before the power line or Red Chris are built.

Rumours swirl around the valley that Imperial Metals will continue to house its contractors, as they are now, down here on the highway, including a contingent of "hard to house" workers -- those indispensable by skill, but known as heavy substance abusers.

All of this despite assurances that Imperial's workforce will be kept up on the mountain and out of local communities. "The Project will be providing a permanent accommodation camp with sleeping, dining, recreation and support services for the permanent workforce of approximately 250-280 persons, of which approximately 125-175 will be on site at any given time," states a 2005 assessment report written while Imperial Metals made its way through a controversially streamlined environmental assessment (EA).

Despite this, an ad hoc town site is taking shape at Tatogga Lake, a 15-minute drive from the native village of Iskut, population 300. It's just like two years ago, when Imperial Metals received permission under a "notice of work" to build an exploration trail up Todagin Mountain: without an in-depth knowledge of traditional land use or authority from the village, the company punched a truck-sized logging road through instead.

At the epicentre of a future grid-powered boom, the native village of Iskut stands to profoundly benefit and lose, all at the same time. The Red Chris mine is about 18 kilometres away from town, but if this project somehow fizzles, there are plenty of much larger proposed open-pit mines nearby. There's Schaft Creek, Galore Creek and Kerr-Sulphurets-Mitchell, all in pre-application B.C. environmental assessment stage or beyond. This is not to mention Mount Klappan coal and Shell Canada's coal-bed methane play, both in the Klappan River drainage.

LISTEN TO WADE DAVIS ON SAVING THE STIKINE

The famous anthropologist speaks with Tyee contributing editor Chris Pollon on how the Red Chris Mine project is part of a potential transformation of a B.C. natural treasure, the Upper Stikine River watershed. Click here to go to audio.

A resource boom is certainly coming, whether the Tahltan Nation communities of Iskut, Dease Lake or Telegraph Creek want it or not: the question now is, what will the local people gain, and what will they lose?

Eskay Creek, an underground gold mine, came and went in the space of about 13 years, during which time the Tahltan were among the most prosperous native people in B.C., enjoying near full employment. But the native jobs tended towards truck driving, catering and chamber-maiding; by the time Barrick Gold called it quits in early 2008, Iskut had little to show for it.

"Eskay Creek left with billions, and everyone's out of a job now," said Oscar Dennis, an Iskut band member who rose to local prominence during the 2005 standoff against Shell Oil's coal-bed methane development.

If any combination of the proposed projects move forward, the Iskut band will bear a disproportionate share of the impacts on the ground; Mount Klappan, Shell's Klappan-Groundhog coal-bed methane project, and Red Chris are all located in their backyard.

The importance of this backyard to the subsistence of the locals in Iskut cannot be appreciated by most urban-centric Canadians. A 1997 study of the nearby Taku River Tlingit First Nation, which certainly applies here, found average-earning families consumed on average about 410 kg of moose, 105 kg of salmon, 24 kg of other fish, and more than 12 quarts of berries each year (these numbers are likely conservative). The study also found that traditional land use -- including the ready availability of wild foods -- in a large part made it possible and desirable for First Nations to live in such remote places, far removed from the mainstream amenities and opportunities of bigger centres.

Marie Quock, chief of the Iskut band, in Vancouver for business meetings when I call for her thoughts on Red Chris and the power line, would not comment.

Wade Davis, who says he supports mining when it is done well, recounts to me harrowing stories of his Iskut friends' tragic experiences of violence, substance abuse and hopelessness. He questions the long-term benefits of Red Chris to the locals.

For part two, click here. Learn what's on the table for the region's First Nations.