"We're here to help the housekeepers," cried NDP MLA Mable Elmore into the intercom at the locked side street service entrance to the luxury Hyatt Regency on the cold morning of Nov. 18. Elmore was on the sidewalk outside the locked door with a spirited group of hotel room cleaners and other UNITE HERE members, backed by close to 100 union supporters. 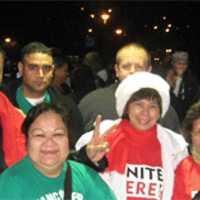 Hotel Union on a Roll

Elmore and a crew of prominent women politicians and trade union leaders came calling on the Hyatt early that morning to underscore their concerns about the high level of worker injuries within the mainly female, mainly visible minority room cleaning workforce at the Hyatt.

The women on the sidewalk arrived armed with their own mops and pails, and with the fitted sheets room cleaners say would reduce the stress placed on them as they repeatedly shift king size mattresses weighing up to 100 pounds. Each bed they strip and make up requires up to seven or eight of these hundred pound lifts, and Hyatt workers sometimes change as many as 26 beds in a shift. They say increased work quotas now demand the cleaners complete work in 15 plus rooms each shift, while pushing heavy carts across deep carpets, bending down to scrub floors on hands and knees and climbing to reach high surfaces.

Naden Abenes is a Hyatt room cleaner with two and a half years' service who joined the demonstrators on the sidewalk with Elmore. She told The Tyee that she was there to make a point about workplace injuries.

"The mattresses are very heavy," the 42-year-old mother of two said. "I recently hurt myself stripping a bed and pinched a nerve in my neck very badly. But I was lucky, compared to lots of the women I work with. They have problems with their hands, carpal tunnel syndrome, bad knees. I'm here to say to management they should lower our work load and take our workplace injuries and chronic pain seriously."

Abenes was one of the speakers featured early in October, when Vancouver Hyatt Regency workers publicly called for a "do not patronize" campaign against their own hotel. "I know it will impact on my hours and take home pay, but it is worth the sacrifice," she said at an Oct. 4 rally. "We have to fight for justice."

Surging through the door

Elmore and her companions wanted to get into the behind the scenes basement rooms where the cleaning staff marshal each day at the start of their shifts, in part to offer to lighten their load for a day by working side by side with them, and in part to highlight the view that Hyatt, like the other Vancouver luxury hotels where UNITE HERE contracts ran out this summer, should sign on to union demands for lighter workloads and better equipment and supplies. It would help reduce a level of workplace injury they say is crippling too many of the women who work in the hotels, and forcing many others to depend on pain killers and skipped lunch breaks to make it through agonizing shifts.

In addition to Elmore, NDP MLA for Vancouver Kensington, the group of volunteers included Vancouver COPE councilor Ellen Woodsworth, Bootz Estrella from Migrante BC, a group that fights for the rights of Filipina immigrants, Deborah Payment from the Compensation Employees Union (Worksafe BC unit), Joey Hartman from the Vancouver and District Labour Council, Tamara Weber from the Fraser Valley Labour Council and Jane Bouey, COPE Vice Chair at the Vancouver School Board. The volunteer cleaners were supported by a raucous crowd of workers from the other major hotels where UNITE HERE is currently campaigning for a new contract, and women and men from other B.C. unions like United Food and Commercial Workers.

Someone buzzed Elmore in through the locked security door, and behind her surged most of the demonstrators on the sidewalk and a few media types, including your Tyee correspondent. We clattered down the corridor to the room where the day shift of uniformed female cleaners was being addressed by department head Phil James. Introducing herself, Elmore explained that she and her colleagues were there to work for the day and asked to be assigned to cleaning teams. As the assembled cleaners applauded, Elmore added that the demonstrators also wanted to speak with hotel management about their industrial safety concerns.

"Can you put us in touch with the general manager, Phil?" the provincial legislator asked after James indicated he couldn't comment and that Elmore and her cohort would have to get an appointment to speak with Hyatt GM Steve McNally.

"He's here in the back," cried several of the Hyatt cleaners, as a tall, dark suited figure slipped out the door. Elmore and the crowd of demonstrators were in hot pursuit, calling out "Are you the general manager? We need to talk to you about the safety of your workers."

Whoever was in the dark suit had no interest in dialogue with a crowd of mop wielding demonstrators and stepped up his pace, soon disappearing through a locked door. The demonstrators arranged a symbolic array of mops and fitted sheets outside the darkened office into which the elusive figure seemed to have disappeared. Still, no one responded to vigorous knocking on the door. 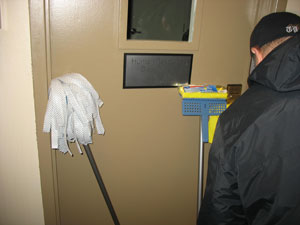 If the fleeing dark suited figure was indeed Hyatt General Manager Steve McNally, he was no more eager to comment on demonstration over the phone than he was to meet the demonstrators face to face. The Tyee placed half a dozen phone calls to McNally's office at the Hyatt over several days, seeking his comments on the demonstration and asking if he was the figure we had last seen in full flight down a darkened corridor in the bowels of the hotel. None of these calls were returned by the time this story was filed.

'Number one for the workers, too'

After arranging their mops and fitted sheets in a still life outside the darkened Hyatt management office, the demonstrators followed Elmore back out to the sidewalk, where they heard further statements of support from local labour councils, politicians and human rights groups. 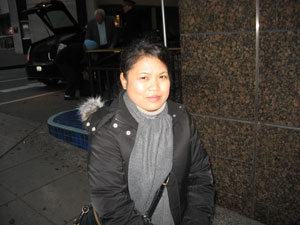 "Workers like the Hyatt cleaners are part of the reason that Vancouver is a number one city in the world," Councilor Woodsworth told the crowd. "Their work is too often invisible, and their conditions are often not good. We want Vancouver to be number one for the workers too."

The Nov. 18 action had another downtown Vancouver target as well. Following the Hyatt action, some of the demonstrators proceeded to the nearby Four Seasons, also being pressured for contract renewal this year. They distributed fliers that read: "It's Always Winter... at the Four Seasons. You pay first class prices. You receive first class service. We get third class wages and benefits."