Green Homes, Out of the Box 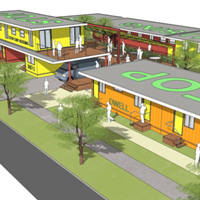 Vancouver boasts both the "Greenest Neighbourhood in the World" -- the LEED certified Olympic Athlete's Village -- as well as the world's first LEED Platinum convention centre.

But the city that calls itself the "Green Capital" has shown surprisingly little interest in a rapidly emerging building technology that promises to become not only far more environmentally friendly but also significantly less expensive than the heavy concrete construction that has reshaped the city's skyline. Indeed, Canada's first modern home built this way stands not in the Terminal City, but across the straight in Victoria.

Over the next few days, The Tyee will report on how intermodal shipping containers -- those 40-foot steel boxes that flow through the region's ports at the rate of more than two million a year -- are being refashioned into affordable green buildings across Europe and Asia.

And on Thursday evening, the Tyee Solutions Society will join with Architecture For Humanity Vancouver and the Design Foundation of British Columbia to kick-off the Quick Homes Superchallenge, a two-part charrette aimed at generating affordable housing concepts for public discussion.

The box that changed the world

The humble steel boxes in which goods are shipped, trained and trucked around the world touched off an economic "revolution," according to Mark Levinson, author of The Box: How the Shipping Container Made the World Smaller and the World Economy Bigger.

"In 1956, the world was full of small manufacturers selling locally," Levinson writes, "by the end of the twentieth century, purely local markets for goods of any sort were few and far between."

One of the world's first purpose-built intermodal container ships set sail from North Vancouver in November of 1955. The Clifford J. Rodgers carried 600 containers to Skagway, Alaska, where they were loaded on to rail to be carried over the White Pass to the Yukon.

The vast majority of containers arriving in Metro ports hail from China, followed by Japan and Korea. And most return to the nations that sent them. But almost 100,000 get left behind each year.

Those containers don't all pile up in the Lower Mainland. Most leave the region via truck or rail car, and many of those ultimately leave Canada via a border crossing or another seaport. But North America's longstanding imbalance of trade with China and other Asian exporters tends to create a backwash of surplus containers in places Vancouver and other port cities.

Greener than concrete, stronger than wood

Containers are built to stack nine high while carrying 60,000 pounds on a deck that's pitching on the open ocean. They are built to survive decades of service in a marine environment, and, if kept painted, will last indefinitely as part of a building.

"These are just big steel boxes," said Barry Naef, who directs the GreenCube Network and the Intermodal Steel Building Unit (ISBU) Association. Naef noted that these boxes present the opportunity to not merely recycle but creatively reuse what is arguably the most durable waste product of the globalization era.   Stranded containers that are not repurposed tend to be melted down. As fuel costs rise, containers on the wrong side of the ocean can become worth more as scrap metal than the cost of shipping them back to China empty.

A typical 40-foot container represents about 8,000 pounds of steel, which can require about 8,000 kilowatt-hours of energy to melt and remanufacture. That's about half of what a typical home uses in a year. As a result, buildings created from used shipping containers function like carbon reduction and long-term storage devices.

At the same time, containers tend to replace concrete in more urban settings, due to the metal boxes' strength and easy stackability. And cement is far from green.

But according to Barry Naef, the biggest green advantage of shipping containers may be their strength.

"Their strength allows the structure to provide green roofs, green walls, solar hot water roofs, all without additional supports," Naef said.   "It's hard to do these things on a wood-frame structure. "Concrete is great. But when you have to go spend so much to do a green roof, I don't think it winds up getting built."

In port regions such as Vancouver, end-of-life shipping containers are often sold for as little as $1,500 in the Lower Mainland, while pristine 40-foot "high cubes" -- which feature nine-and-a-half-foot ceilings -- can fetch $4,000. Either way, it's substantially less than the cost of building a similar box out of wood or concrete.

The cost to convert that box to a home varies widely.

Charities providing housing to Maquiladora workers in Mexico are able to convert used shipping containers into simple homes for about $15,000 (excluding land costs). Those homes are small, but they come complete with doors, windows, a full bathroom and kitchen appliances for less money than most Canadians spend on a car.

Companies that provide container-based worker housing to the oil and mining industries sell heavily built pre-fab units for prices that start in the range of $35,000 per container unit. Some of these are heavily insulated for arctic conditions. Others include generators and water-processing plants. (More on these units on Wednesday.)

Custom home builders report saving an average of about 25 per cent against what a comparable home would have cost to build, according to Naef. He said cost savings vary widely according to how many hurdles are thrown up by local zoning and building code officials.

"Local building codes are a real hurdle for some builders," Naef said.

"We need to do a much better job of educating zoning boards and building inspectors," he said. "Each building inspector seems to have a different reason why they wouldn't let someone build with shipping containers. Many objections are based on false assumptions."

For example, he noted that many local building codes still require studding out all the walls in order to comply with outdated zoning ordinances.   "This unnecessary duplication reduces --- but still does not eliminate --- the cost effectiveness of container-based construction," Naef said.

In dense cities such as Vancouver, however, the greatest cost savings and the most significant green advantages generally come down to the same thing: The less land a home requires, the better.

Containers are built to stack. And it has been through the creative assembly of stacks of containers -- coupled with the innovative ways of opening up the interiors -- that a new built form has begun to emerge in Europe and Asia. Here are a few examples:

Container City is a collection of London-area developments drawing on container techniques perfected by a company called Urban Space Management. The first project was built in East London, in 2001. The Container City projects include offices, retail shops, artists studios, a nursery, a youth centre, and a school as well as housing.

"This modular technology enables construction times and cost to be reduced by up to half that of traditional building techniques while remaining significantly more environmentally friendly," states Urban Space Management.

Keetwonen is the world's largest container housing project, as well as one of the simplest. The project is a student village built from 1,050 containers near Amsterdam city center.

Though only 320 square feet, each suite has separate sleeping and living rooms, a full kitchen and bath, large windows and a private balcony.  The units are well insulated and served by a central heating system. The complex hosts cafes, shops, art studios and even mini-gyms.

And while some container projects strive to conceal the container's industrial essence, a Korean project, Platoon Kunsthalle, takes the opposite approach. The Seoul artists centre was created from 28 containers.

Next in the series: A look inside one of Canada's first homes built with shipping containers. You can also click here to download a copy of the entire series in PDF.