The British Columbia government wants sweeping new powers to collect and share citizens' private information and store it outside of Canada. Officials argue the powers would help them better serve the public, but a privacy advocate says British Columbians should be worried about the government's plans. 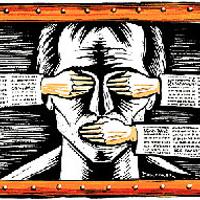 How to Revive an 'Eviscerated' Freedom of Info Act

Representatives of the B.C. government presented their 88-page submission to a March 24 meeting of a special committee struck to review the Freedom of Information and Protection of Privacy Act. Such a review happens every six years. The transcript is here.

The government proposes public bodies be able to collect and share people's personal information without their consent. Non-public bodies such as the police, social service providers and non-governmental organizations would be able to do the same.

It would also change the act to allow information to be stored outside of Canada, overturning a provision put in place to protect British Columbians from the long arm of the United States' Patriot Act.

"It's the scope of the thing," said Vincent Gogolek, the policy director for the Freedom of Information and Privacy Association watchdog group. "They really are looking to change the basis of the act to remove people's control over their own information."

'Shared across the universe'

The government's submission says it wants the act amended "to allow for indirect collection by, and disclosure to and between all relevant public bodies, without consent, for purposes of integrated program or activity."

Even non-public bodies including "government and police agencies in other jurisdictions" could indirectly collect and disclose personal information without consent, under the proposal.

This would be done where it's "of benefit to the citizen and necessary to the delivery of the service or program," or for public health and safety.

"They want it shared across the universe," said Gogolek. "NGOs, the RCMP, all over the place. . . They don't want any supervison of that. . . and that's a problem."

The information at stake includes some of the most personal things about people, he said. Information about medical history, mental health, addictions, housing and criminal records would be included, he said. "This is stuff you don't want bouncing around all over the place."

People have a right to keep control of their information and how it is used, Gogolek said, adding it's not good enough for the government to just say, "trust us."

The government is making the pitch as it embarks on a $180-million integrated case management system that will be used by both the children and families and housing and social development ministries.

The government has entered a six-year deal with Deloitte Inc. to develop the system, despite warnings the system will create new privacy risks.

Perhaps even more contentious is the provincial government's desire to store more information outside the country.

Here's how the submission to the committee puts the request: "Amend the provisions in the FOIPP Act prohibiting the storage of information outside of Canada to take into account IT developments and advancements that make jurisdictional boundaries artificial."

The change would include, "social networking and other internet tools and mechanisms that can promote stronger citizen engagement and [would] take advantage of commercial and economic opportunities for storage and management of information including 'cloud computing.'"

The provision requiring information stay in Canada dates back to soon after the B.C. Liberals took office in 2001. They were contracting out the management of health records, just as the United States government responded to the 9-11 attacks on the World Trade Center by bringing in the Patriot Act, parts of which allowed for the collection of large amounts of information.

The province's chief information officer, Dave Nikolejsin, presented the government's submission to the committee. He described why they want the restrictions on foreign data storage changed: "How we are able to do some of our alternative service delivery projects is dictated, because a lot of the organizations that bid on opportunities like that and attempt to do business with us are not Canadian businesses. We have to go through machinations that other jurisdictions don't in order to make sure that the data stays in Canada."

"Alternative service delivery" is the wording the government uses to describe contracting out public services. He named Alberta and Ontario as provinces B.C. competes with that don't have similar restrictions on data storage.

"This was hugely controversial and the government was forced to bring it in because of the Patriot Act," said Gogolek. "The Patriot Act is still there." The president of the United States may have changed, but the law has not, he said.

Gogolek also takes issue with a couple of changes suggested by the attorney general and the solicitor general.

One would extend the definition of "law enforcement," allowing public bodies to refuse access to a greater number of records. Originally the idea was to prevent information that would compromise a particular investigation from being released. As Gogolek puts it, you legitimately don't want the U.N. Gang able to request records about how the police are investigating the U.N. Gang.

"They want to expand it from investigations to crime prevention," said Gogolek. That would make lots of records that are now releasable secret, he said. "It's got to be realistic. You can't just raise hypotheticals."

The government also asked the committee to rewrite the law so it can refuse access to security video from jail cells. That would be in direct contradiction to a two-year-old ruling by former information and privacy commissioner David Loukidelis, said Gogolek.

"They seem grumpy about that," he said. Knowing that video from jail cells may find its way into public is incentive for the people who work in jails to follow the law, he said. That incentive would be removed if people knew the footage could never be released, he said. "I don't think it's a good way to go."

The acting information and privacy commissioner, Paul Fraser, is scheduled to present to the committee next week.

Gogolek said his group, which presented to the committee last month, will also be looking for a way to respond to the government's submission.