Proponents of a mega-yacht marina for Victoria's inner harbour are accepting $10,000 deposits from people who would like to dock their boats there, despite the fact the project is still waiting for federal and provincial approvals and there's no guarantee it will ever be built. 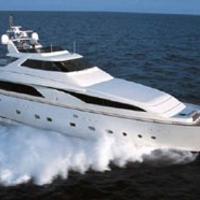 "With the marina targeted to open in 2011, we are now accepting Priority Reservations for 52 yacht slips," said a recent Victoria International Marina newsletter. "If a Reservation holder chooses not to buy a slip for any reason, the reservation deposit is completely refundable."

The Tyee reached the marina's general manager, Lachlan MacLean, at the Seattle Boat Show, where he's promoting the proposed project this week.

The marina has been taking reservations since just before Christmas, he said. For $10,000, people get on a list to have first crack at the slips if and when the project is approved and the marina is built, he said. There is no commitment to buy and people can get their money back at any time, he added. "And, of course, if the approvals don't go through, the deposits are refundable."

There's no doubt the project is needed, MacLean said. "For boats 50 feet and up, there's simply nowhere to put them," he said.

Many of the marinas on the Pacific coast of North America were built 20 years ago, or more, and the size of boats people buy has since grown, he said. "The moorage capacity for the boats people are buying hasn't kept up," he said. "There's a certain pent up demand for moorage for boats over a certain size."

It seems odd the proponents would be taking people's reservations and money for a project that may or may not be built, said Diane Carr, a member of Save Victoria Harbour, one of the groups opposed to the marina proposal.

"I don't know that they have anything to sell," Carr said. "They have no guarantees from the government. I hope they're putting the money in a trust account." Aside from the governmental approvals that are needed, there's a riparian rights issue to settle, she said.

MacLean confirmed the proponents are still waiting for final decisions from Transport Canada and the B.C. government, adding they are confident those approvals will come. "We've put a lot of years of research and study into the permits and we're reasonably confident it's all going to happen."

It's not final, he said, but "we're confident it's a good project and it's going to happen."

While MacLean acknowledges the uncertain state of the project, the home page on the marina's website makes it sound like the facility will open next year. "In 2011, the yachting world will welcome the Victoria International Marina," it says. "Early reservation and slip selection will guarantee your place and access to the spectacular cruising waterways of BC and the Pacific Northwest."

When people make their reservations, the marina managers make it clear the marina may not open, MacLean said. "If you see on the marina reservation page, there's a caveat there." On that page, at the end of four more paragraphs promoting the marina, it notes, "The marina project is subject to government approvals."

A spokesperson for the Integrated Land Management Bureau in B.C. said the province is waiting for federal approvals before the minister responsible, Pat Bell, decides on the application to use 2.63 hectares of Crown water lot.

And the member for parliament for Victoria, New Democrat Denise Savoie, said she spoke with officials in Transport Canada Minister John Baird's office today and confirmed no approvals had yet been granted.

Asked what she thinks of the proponents taking reservations and deposits, Savoie said, "I found it perplexing to say the least."

Last week Savoie asked the federal commissioner of lobbyists to investigate the role political insiders may be playing in the approval process. Media reports, starting with The Tyee in October, have made it clear that there have been both provincial and federal lobbying efforts on behalf of the marina while the official process has continued.

"Given all the issues that have been raised about the insider influence that's been brought to bear on this application, it really makes people wonder and question the integrity of the process such as its been," said Savoie.

"It creates real skepticism around the process when someone can be out selling slips before the approval is given. It makes it look like there's a wink-wink tacit approval that's been given."

MacLean said taking reservations was part of "assuring ourselves there's a market out there" and has nothing to do with the approval process. "We've had solid interest," he said. "There are people who are genuinely interested in the slips we're offering."

He declined to say how many deposits had been accepted, other than to say it is more than none. "That's commercial stuff we don't talk about."

He compared the deposits to the payments people might make to buy a condominium in a building that has not yet been built and said the company won't spend the money without completing the project. "They're in a trust account with our lawyer. They're very safe."