[Editor’s note: ‘The News We Deserve’, recently published by New Star Books, is long-time media critic Marc Edge’s contribution to the growing genre of investigations into the roots of Canada’s current journalism crisis. In the book, Edge homes in on the takeovers and mergers behind the razed newsrooms and serially slimming papers, and reflects on the federal government’s current efforts to study the issue and determine what actions it may take to support the industry going forward. We share with readers below an excerpt from the concluding chapter.] 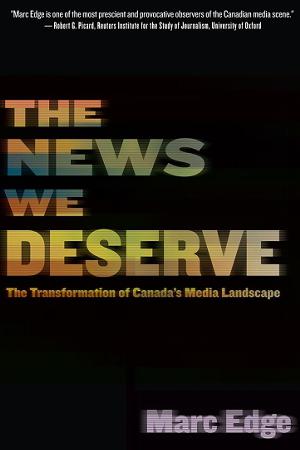 The Heritage committee holding hearings into media and local communities recessed for the summer and cancelled its planned cross-Canada fall tour, farming out the problem of changing media realities to a think tank for further study. The Public Policy Forum was newly headed by former Globe and Mail editor Edward Greenspon. “We’re not, if you will, hired by the government,” said Greenspon. “But we’re doing this in co-operation with the government.” Founded in Calgary in 1987, the PPF was designed to “create an independent space where leaders from the private and public sectors could meet regularly to discuss governance and public policy.” Its review, according to the Canadian Press, revolved around three questions: “Does the deteriorating state of traditional media put at risk the civic function of journalism and thus the health of democracy? If so, are new digitally based news media filling the gap? If not, is there a role for public policy to help maintain a healthy flow of news and information, and how could it be done least intrusively?” A half-dozen roundtables with invited experts were planned, as was polling designed to determine “how Canadians view the news media and its role in democratic society.” A concluding symposium was scheduled for the fall. CBC News obtained a Heritage ministry report under the Access to Information Act which showed the PPF was being paid $270,000 for its study and had a deadline of year’s end to deliver it.

As a long-time journalist, I am leery of subsides because of the possibilities they create for government influence over the news media. Any program of assistance should be well insulated from editorial control, but that doesn’t mean tax incentives can’t be provided to encourage the establishment and assist the operation of local media outlets dedicated to serving the news needs of Canadians. Such incentives could also render ownership of Canada’s existing news media more diverse. Local ownership of news media was one of the first things that fell by the wayside in the rush to consolidation starting in the 1960s and ’70s, when absentee chain ownership became the norm. Tax incentives could be provided that would make advertising in locally owned, independent media more cost effective than in chain-owned publications. Postmedia CEO Paul Godfrey’s suggestion to the Heritage committee of increased tax incentives for ads in supposedly Canadian publications such as his could be modified to instead allow ads in locally-owned media outlets to be written off at a higher rate than other ads. That might encourage the sale of chain-owned dailies to local owners who could make them more responsive to their communities. Any merger or closure of newspapers should be prohibited without first offering them for sale. Subsidies and/or tax incentives could then be provided to encourage their sale to local owners or even to their employees, as at Victoria’s CHEK-TV in 2010.

First, however, the few existing laws protecting our news media have to be enforced, even retroactively, including those limiting foreign media ownership and preventing monopoly control of local markets. The inexplicable entrenching of foreign ownership of Canada’s largest newspaper company — and then its second-largest — should be investigated, as should the corporate dealings that have led to a disappearance of newspaper competition in B.C. The merging of Postmedia’s newsrooms in Vancouver, Calgary, Edmonton, and Ottawa despite promises to the contrary, and in the case of Vancouver a long-standing promise, should be put up for reconsideration. If political favoritism by the former Conservative government was in any way involved in approving the decisions that allowed them, the increased consolidation and foreign ownership of our news media should be rolled back. 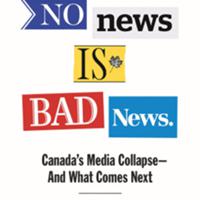 In analyzing proposals designed to offset or ameliorate the insidious effects of news media financialization, Spanish scholar Núria Almiron noted in 2011 that the proposals “all point in the same direction.” That direction is away from for-profit news media to a journalism uncoupled from corporate speculation and financial engineering. “This call can be regarded,” she wrote, “as an unprecedented ethical claim to devote journalism, once and for all, to the public interest.” But doing that, according to Almiron, will require “a mindset shift away from the old way of thinking about non-profit and the media, where non-profit becomes a model not just for small and secondary media, but for private mainstream media as well.”

We should consider what is harmful in terms of public/social interests instead of private/individual interests. We should avoid defining public interest in relation to business performance; we already have evidence enough to know about the harmful consequences of this recurrent relationship throughout the 20th century.

In Canada, a mindset shift is also needed among both federal regulators and journalism educators. News media should no longer be treated by Ottawa like any other business but instead as a public service of enormous social and political importance. The Competition Bureau has abdicated its duty to the public in this regard and should be investigated from top to bottom. Its capture by an industry it is tasked to regulate, as with the CRTC, is patently apparent. The broadcasting regulator should prohibit journalism schools from participating in its public benefits program because the temptation to mute any criticism of corporate media takeovers or even to advocate for them is apparently too great for some educators to resist.

Instead of looking out for the best interests of media owners, in whose pockets they have thrust their hands so deeply, journalism educators should advocate for the best practices of journalism and for the news needs of Canadians. Most journalism educators in Canada, with a few notable exceptions, have been nothing less than derelict in their duty to serve the profession and practice of journalism because they have largely given ownership a pass. Our news media have been transformed as a result of ownership changes over the past two decades, and not for the better. Perhaps only one in eight Canadians believe media owners influence the news they receive, as UBC’s Mary Lynn Young told senators when they visited her journalism school in 2005. Canadians need to instead realize that ownership influence over media content is significant and arguably aids in hegemonic social and political control by the country’s elite and now foreign financiers. First it seems most journalism educators in Canada need to wake up to the possibility.

To a great extent the horse is already out of the barn. Decades of unrestricted consolidation and even foreign ownership have decimated Canada’s news media. Bold measures are thus needed to redress years of official neglect. Canada now has an opportunity to institute some forward-looking media policies. It might be the last chance for any hope of a diverse and independent news media in Canada.