What have Rachel Notley and her Alberta New Democrats wrought? Of many seismic shifts, here are five: 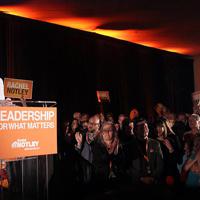 Long-time Calgary Tory MP Deepak Obrai is bracing for a tough fight in the federal election after all four provincial seats in his riding went NDP. As he told the Globe and Mail:

"More, stronger candidates will look at the results, so we expect stronger (NDP) candidates with stronger credentials coming after us. The NDP have become a player, indeed."

2. Bring in the bulldozers: Alberta's PCs have pancaked.

Alberta's Progressive Conservatives may be a party beyond repair. Mount Royal political science professor Duane Bratt lays out why in the Globe and Mail:

"First, the party has no leader (Jim Prentice resigned Wednesday night) and no obvious successor. Second, the party has been reduced to a largely Calgary caucus (only two seats outside of the city). Third, the PCs are likely broke, having spent plenty of money in a losing effort, and with little ability to raise funds now that it no longer controls the levers of government. Fourth, the glue that has held the PCs together as a big tent party for so long was power. Now that they have lost power, what keeps the PCs together?

"Finally, the NDP is expected to conduct a thorough audit of Alberta's books. I predict that all sorts of surprises will emerge of things that the PCs have kept hidden while they were in government. This will continue to generate political stories and maintain the disgust that many voters currently have towards the PCs."

3. The other resource extraction issue: Getting Big Money out of politics.

Even as Notley reassures the oil patch that everything is going to be "A-OK," her triumph's biggest impact on Alberta's political power structure could just be executing her party's campaign pledge to impose a ban on corporate and union donations to political parties.

If Alberta can do it, why can't all of Canada?

4. Norway isn't as far from Alberta as conservatives scoffed.

As Samantha Power reported in The Tyee last night: "Edmonton-Centre NDP candidate David Shepherd, who unseated Liberal MLA Laurie Blakeman, said trust remained a big issue with voters into the last days. 'The number of people saying "Norway" on the doors is huge,' said Shepherd, in reference to Norway's resource revenue management. The Scandinavian country has saved $1 trillion from its oil revenues, while Alberta will be $30 billion in debt by 2020."

That chasm between how Alberta and Norway have managed their petro-wealth was reported in an influential 2012 Tyee series by Mitchell Anderson who went to Norway and talked to architects of that nation's oil wealth policies. One was Norwegian petroleum engineer Rolf Wiborg, whose speech in Alberta before the election included praise for Anderson's Tyee reports.

As other media took up Anderson's theme, defenders of Alberta's status quo laughed at such "Norwailing." The derisive term, coined by the University of Alberta's then-Enbridge Professor of Economics Andrew Leach, was echoed by libertarian pundit Colby Cosh, among others.

For the New Dems, though, painting the PCs as squanderers of Alberta's natural wealth proved note perfect. Will Mulcair carry the tune?

5. Alberta's voters liked what they heard from the Progressive Conservative premier. He just happened to be their province's first one -- the late Peter Lougheed.

When Notley released the NDP platform, she invoked the man who'd launched the PC juggernaut over four decades before. "Instead of listening to Mr. Prentice, I'll listen to premier Peter Lougheed, who said that it's time for Alberta to consider a corporate tax increase. Like Mr. Lougheed, I believe what we've set out today is a common sense better approach, an approach that builds instead of tearing down."

At the time, Edmonton-based political blogger Dave Cournyer noted: "Ms. Notley has used the 'Lougheed defence' numerous times since Jim Prentice began casting his opponents as "extremists" when he first called the election two weeks ago. The NDP platform feels neither extreme or even typically NDP, at least for the Alberta NDP.

"By calling for a moderate two per cent increase to corporate taxes and a careful review of the royalties Albertans collect for their resources... Ms. Notley is positioning herself as a sensible alternative to Mr. Prentice, who has refused to discuss raising royalties or corporate taxes."

Notley's ability to seize on saint Peter's own gospel is a cautionary tale to any party in power so long that it begins to forget why it first resonated with citizens. The corollaries to Harper's Conservatives are rife.

By the way, guess who else admired Lougheed's approach when they framed their plans for managing petro-wealth? The Norwegian government.