The Canadian Radio-television and Telecommunications Commission wrapped up its third major hearing in as many months this week, focusing on the wholesale market for broadband Internet services. Coming on the heels of the earlier hearings on broadcast television regulation (the "TalkTV" hearing that was highlighted by a showdown with Netflix) and wholesale wireless services, the proceedings followed a familiar script. 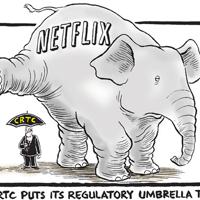 The incumbent providers urged the Commission to resist regulating access, claiming a competitive market exists with few barriers to new competitors. Meanwhile, independent Internet providers pointed to their relatively small share of the current broadband market and warned that failure to mandate access for faster fibre connections to the home would effectively eliminate future competition as Canadians gravitate to services offering faster speeds.

While it will take some time for the CRTC to issue its decisions in all three cases (the broadcast decision is expected before the end of the year), it is not too early to declare the entire system broken. The CRTC-Netflix battle prompted many to conclude that the Commission was a relic of the past, unable to adapt to the disruptions facilitated by the Internet. Yet the Commission's difficulty dealing with the fast-moving changes throughout the communications sector is chiefly the result of an outdated regulatory structure that misses the proverbial forest for the trees.

The past three months have essentially involved the examination of bite-sized pieces of Canada's communication environment without really digging into the whole. The conventional regulatory approach may dictate that the CRTC consider broadcast, wireless and broadband services separately, but the silo approach makes little sense when both the technologies and the dominant industry players overlap every step of the way.

Canada's communications market now stands as one of the most vertically integrated in the world. The same companies wear different hats before the Commission as they alternately appear as dominant broadcasters, broadcast distributors, wireless companies and broadband Internet providers. While the regulatory world treats each market differently, companies such as Bell and Rogers strategize about the whole, not the parts, and are able to use the piecemeal approach to their competitive advantage.

The occasional witness raised this concern, urging the CRTC to consider issues that fall outside the conventional scope of the broadcast or telecom silos. For example, during the broadcast hearing, several emphasized that since a growing number of Canadians access "broadcast" through the Internet or wireless devices, the issue was really one of telecom regulation, not broadcast.

Similarly, witnesses at the broadband Internet hearing noted that issues of regulated access were fundamentally about delivering broadcast content or third party applications, not about specific speeds or pricing. As the Commission delved into technical questions over wholesale costs of Internet services that would be incomprehensible to most Canadians, discussion about the implications for new services from a monopoly-like access to the home for fast Internet was largely absent.

Lump it all together

Solving these bigger issues may indeed be beyond the ability of the CRTC. There is a growing sense that the twin governing statutes -- the Broadcasting Act and the Telecommunications Act -- should be reformed into a single Communications Act that better reflects today's Internet environment. However, legislative reform is the responsibility of the government, not the regulator, and Industry Minister James Moore has shown little interest in tackling the issue.

Similarly, the calls for "structural separation," which would involve breaking up the larger companies into separate content and carriage companies are growing louder, but CRTC Chair Jean-Pierre Blais noted that those steps are also better suited to elected officials.

That leaves the Commission with a system that largely ignores what is obvious to millions of Canadians who receive monthly bills that lump together everything from wireless services to broadband Internet to broadcast television. Communications now comes in a single bill and represents one very large policy forest that cannot be effectively addressed one tree at a time.