John Reed was the only Western reporter covering the Russian Revolution. Now I know how he feels. 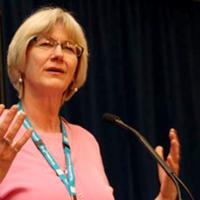 Assigned by The Tyee, I was the only reporter covering last week's convention of the BC Federation of Labour. Okay, not quite the same. For all his anti-corporate fulminations, not once did Jim Sinclair proclaim: ''Let us now begin to construct the social order.'' Nor did anyone storm anything, let alone the Winter Palace, unless it was the coffee bar. The masses actually voted to choose their new leader. How non-revolutionary. Kerensky would have been pleased. Still, there I was, the lone scribe at the convention.

You can see why editors would take a pass on assigning coverage. After all, the Federation represents only half a million workers; the convention was merely going to choose its first president in 15 years that was not named Jim Sinclair; and the winner would be the first woman to head the labour organization in its 104-year history. Plus, the contest between Irene Lanzinger and Amber Hockin was tight as a drum. What could possibly be newsworthy about any of that? (There was coverage of the Fed fight before and after the convention, but none during.)

Of course, this is not surprising. The mainstream media decided long ago that regular coverage of organized labour was like Iron Maiden, some sort of relic from the 1980s with no place in the hip world where editors reside. Just another self-interest group trying to crowd out all those much worthier self-interest groups on the business page. Yes, labour matters are still occasionally covered on a one-off basis, but the ranks of full-time labour reporters in the country are the same as the number of working steam locomotives. Zero.

Despite my solitude, however, in addition to picking up free pens at the booths and buying buttons from Melva, the famous ''button lady,'' I did manage to keep myself engaged. Herewith, an old-style Mickle notebook on some of the things that caught my interest.

1. I should not have been surprised at the dearth of reporters. Even the Fed seemed shocked that a journalist would show up. When I arrived, a staffer escorted me around the room, looking for the media table. Finally, she realized that all those empty chairs at the front were, in fact, the media section.

2. Outgoing president Jim Sinclair did his best to emulate Lenin, delivering a long, fiery speech on Day One that seemed to touch on every hot button issue in the country. The standing ovations piled up like cockroaches at the Cobalt Hotel, where Sinclair once lived. As the convention headed towards a sharply divided vote for his successor, Sinclair, who was backing Fed secretary-treasurer Irene Lanzinger, pleaded for unity: ''I hate it when we fight each other. I really hate it when unions raid each other. I worry when workers fight, and we are not there to help them. I love this movement when we are truly one.'' And in case anyone was wondering what Brother Sinclair will be doing when he turns 77, he told delegates: ''I will be out on the picket line with you.''

3. There was a good, vigorous debate over strategic voting, as delegates considered a resolution opposing the ''Stop Harper'' strategy of voting Liberal in ridings where the NDP has no chance of winning. ''We have to support the NDP right across the country,'' said a guy from CUPE. ''The answer is not Justin Trudeau. He is not going to stand up for workers in this country.'' Gavin McGarrigle, Unifor's impressive B.C. area director, strongly disagreed. ''I will never stand by and see Stephen Harper win another election,'' he declared, in ringing tones. ''If there are aliens from another planet who can defeat the Conservatives, then I'll vote for those aliens.'' The resolution passed, narrowly.

5. This was my first chance to hear from the man who shared a drink with Christy Clark this summer and parlayed that lounge relationship into helping settle the bitter B.C. teachers' strike. That would be new Canadian Labour Congress president, Hassan Yussuff, who toppled our boy from Trail, 12-year incumbent Ken Georgetti, from the post. Yussuff had a message for anti-union governments and employers: ''We're not going to take this shit no more.'' Ooooo-kay. Yussuff went on to pledge union defiance should the government pass Bill C377, the odious private member's bill that would require public disclosure of all union spending over $5,000. ''If Stephen Harper wants to throw us in jail, he will have to start with me.'' Applause.

6. There was also non-labour news at the convention. Grand Chief Stewart Phillip, president of the Union of B.C. Indian Chiefs, announced Tuesday he would be arrested at the Kinder Morgan pipeline protest on Thursday morning. ''This is a matter of principle. Leaders can't just talk the talk. We have to walk the walk. As I'm being arrested, I'm going to think of my grandchildren and your children.'' Huge, emotional ovation. And CUPE BC president Mark Hancock revealed that his union would be suing failed mayoral aspirant Kirk LaPointe and the NPA over their ''union corruption'' charges during last month's municipal campaign. ''You picked the wrong people to fight with,'' Hancock thundered. ''We will kick your ass in court.'' Two modest scoops and nowhere to go with them, except Twitter. If there is news and no one is there to report it, is it news?

7. Delegates also rallied in the rain to support the Fed's new campaign for a minimum wage of $15 an hour. Even the mayor was there.

7 (a). During another tribute to Big Jim Sinclair, this one featuring not just a video and veteran Sun columnist Vaughn Palmer suggesting Sinclair go back to newspapers as an unpaid intern, but real live people extolling the outgoing Fed head. Along with the likes of former premier Glen Clark and prominent First Nations leader Ed John, there was the afore-mentioned Hassan Yussuff. Perhaps thinking it was a roast, the CLC president wondered who was this great, great guy. ''The [Jim Sinclair] I know has been pretty annoying for all these years. He always had an opinion he couldn't wait to get out,'' Yussuff observed. Alright, he also said: ''Jim has shown you've got to stand up and fight for others who don't have a voice in this province. We are a better labour movement today because of [Jim Sinclair's] leadership.'' In response to all the accolades, Sinclair rebuked a reporter (me) who had pointed to the perceived split in the Fed, given the strong challenge for president by those wanting a change in direction: ''There's not a divided B.C. Federation. There's some democracy going on.''

8. A scholarship in Jim Sinclair's name will be established as part of the Labour Studies program at Simon Fraser University. No, no, really. There are young people who study labour history. Think of them as medieval scholars. Here's the link to SFU's worthy program.

9. There was a presidential debate between Lanzinger, former head of the BCTF, who defended the Fed's record and policies under Sinclair, and challenger Amber Hockin, Pacific Regional Director for the CLC, who called for change. Neither said: ''You had an option, ma'am.'' Hockin noted B.C. has had the biggest drop in unionization in the country. ''If we'd kept our foot on the gas over the past 15 years, we'd have 95,000 more workers with union cards… This is no time for the status quo. It's simply not getting us to where we need to go.'' Lanzinger pledged to continue Fed policies developed under Sinclair, particularly its philosophy of standing up for all workers, not merely union members. Part of that, she recounted, was occupying the Kitsilano Coast Guard station to protest its closure by the feds. ''It's been a long time since I slept in a sleeping bag beside a 20-year-old.''

10. Election years are always a big deal at Fed conventions. Unions pack the hall, filling as many of their allotted delegate slots as they can muster. With two credible candidates -- and clear divisions between them -- running to take over from Jim Sinclair, there was a record turnout of more than 2,200 delegates. Unions large and small seemed to line up evenly on either side. Adding to the drama is always the dramatic, archaic announcement that they are ''tiling the doors,'' meaning no one, especially pesky reporters, can enter the hall while voting goes on. After a long count that inextricably stretched past lunch, ''Landslide'' Lanzinger was declared president of the Fed for the next two years by an itsy-bitsy-teeny-weeny margin of 57 votes.

11. Running on a two-person slate with Amber Hockin, BCGEU's northern regional coordinator Aaron Ekman had been unopposed to take over as secretary-treasurer of the Fed. But a surprise, last-minute nomination put Howard Huntley of the storied Grain Workers Union on the ballot. His nominator explained he didn't like having the public sector holding both of the Fed's top positions for the first time. The result was no romp in the park. Ekman defeated his virtually unknown opponent, but with only a modest 60 per cent of the vote. Some delegates may have registered their dislike over a remark he made while expressing support for Amber Hockin. He pointed to her ''decades of experience, not limited to one union, alone.'' That was a clear shot at Lanzinger's long tenure with the BCTF. Cries of ''shame'' and boos erupted in the hall. Still, he is the first northerner to hold high office in the Fed, and, a committed trade unionist at 36, he could be organized labour's face of the future.

12. I took Friday off. Solidarity, sisters and brothers.