As a result of a lack of federal government funding, Canada wasn't included in the most recent World Values Survey -- one of the few means we have of knowing what our values are, how we differ from people in other countries and whether those values have changed over time. 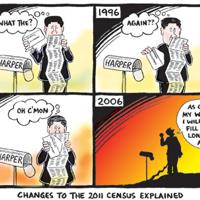 Census Ruckus: I'm with Harper on This One

The survey, which uses face-to-face interviews rather than phone calls, has happened six times over the past 33 years, with the most recent conducted in 59 different countries. Respondents answer a questionnaire that measures nearly 250 indicators covering everything from someone's feelings about race to their political leanings.

Because of that work, we know, for example, that 14 per cent of Canadians in 2005 said they wouldn't like someone who was gay to be their neighbour. By comparison, 24.9 per cent of Americans said the same thing.

Past surveys have also told us 64 per cent of Canadians in 2005 would have agreed or strongly agreed to an increase in taxes if the extra money was used to prevent environmental pollution -- a seven point increase over 2000.

And we know 16.8 per cent of Canadians in 2005 agreed or strongly agreed that politicians who don't believe in God are unfit for public office, compared to 30.5 per cent of Americans.

Findings such as these are valuable for everyone from journalists and academics to politicians and everyday voters, potentially leading to stories, studies and policy changes. But Canadians won't know if those values or any others changed between 2010-14 because our country, which has been part of the survey since 2000, wasn't included in its most recent wave, the results of which were released late last month.

University of Toronto political science professor Neil Nevitte, the investigator in charge of the survey's Canadian component, stated the money for that research previously came from a number of federal government departments, as well as Statistics Canada.

"Each had very good reasons for wanting these kinds of cross-time data for policy reasons," Nevitte wrote in an email.

According to Nevitte, the cost of gathering the data for the new survey would have been around $650,000, and would have included hour-long, in-person interviews with 1,500 Canadians and additional interviews with 600 new immigrants.

But Nevitte stated, "In the last round, the members of that [government] consortium faced cutbacks of one sort or another and, in the end, we could not put the team together. Not an unusual story. But truly a shame from many, many points of views."

University of British Columbia political science professor Richard Johnston said the absence of the World Values Survey will result in a "huge hole."

"It means anything we have to say [about political and social values] will be stale to the tune of at least a decade. We won't have current stuff," said Johnston, the Canada Research Chair in Public Opinion, Elections, and Representation.

As a result, he continued, more public policy decisions will be made in a "vacuum."

"It's akin to why the Canadians should care about the long form census," said Johnston, a reference to the Conservative government's 2010 decision to replace it with a voluntary national household survey, which is less comprehensive and reliable.

Neuman said the absence of the World Values Survey is another example of where "research that has been historically present and important in terms of how we understand who we are and how we fit into an international context is all going missing."

He said such research is important because it doesn't come "through the sometimes distorted lens of the media and special interests."

Nevitte stated he is presently in the process of trying to secure funding so Canada is included in the World Values Survey's next round. That round is scheduled to get underway in 2017 with the data being released in 2018 or 2019.

Several federal government departments were unable to respond by deadline to requests for comment placed on Friday last week.