"Our goal is to keep our papers loaded with content of interest to our readers and to be paid appropriately by those who find us useful, whether the product they view is in their hands or on the Internet." -- Billionaire Warren Buffett, March 1, 2013 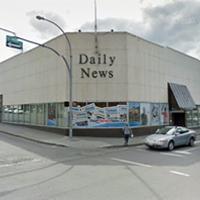 Saturday's untimely death of the 80-year-old Kamloops Daily News is yet another reminder to those who love newspapers that the future is either digital or dismal.

Newspapers are hemorrhaging ad revenue to Internet advertising in stunning amounts that no transfusion can stem. It requires radical surgery to save the patient.

But when brilliant investors like Buffett are buying -- not selling -- newspapers, and committing to content in print and online, then hope is not lost.

Unfortunately, the Kamloops Daily News didn't make it to the operating table. The sudden shutdown by owner Glacier Media and loss of 46 jobs was the result of insufficient advertising to cover its costs, said publisher Tim Shoults.

Unifor Local 2000 President Mike Bocking declined to comment to The Tyee last week, saying the union was in talks with the company on behalf of its members.

The transition from newspaper to Internet advertising is truly stunning.

In Canada in 2012, Internet advertising was $3 billion compared to daily newspaper ad revenue at just over $2 billion, according to Interactive Advertising Bureau figures reported in September 2013.

Internet advertising, including on mobile phones, was only worth $237 million in 2003 but has now captured 27.5 per cent of all major media advertising. It's only $382 million behind television ads at $3.5 billion and 31 per cent.

Fortunately, there are many reasons newspapers and their reporters, columnists and editors will still thrive in the years ahead.

And since 2003, The Tyee has been one of the new breed of online "newspapers" or "magazines" that produce unique news, opinion, arts and other copy every day without ever being in print.

The Tyee's nearly 10 million pageviews in the last year make it effectively one of British Columbia's largest daily publications -- and with reader support, it may become a national entity in the near future.

What's more, The Tyee currently has 28,000 Twitter followers, 22,000 subscribers getting headlines by email, 4,000 Facebook fans and more than 19,000 registered commenters.

That kind of thinking is why the San Francisco Chronicle -- one of the oldest big city newspapers left in the United States -- announced this month that all its staff will be attending a digital and social media "boot camp" to reduce circulation loss and remain relevant.

"Failure only means we all lose our jobs -- and the Bay Area loses its number one news source. Failure to reach our goals -- both individual and team -- is simply not something we can tolerate, and we won't," says Audrey Cooper, 36, and the first female managing editor in the paper's 148-year history.

I agree with her urgency, especially after the loss of the Kamloops Daily News.

But I hope newspapers continue to literally publish, as well as online, because there is an irreplaceable pleasure in a physical newspaper, even in getting ink on your fingers as you turn the pages.

I can't remember when I didn't love newspapers. As a young boy I read them, and at about 12 I delivered the Vancouver Sun in Abbotsford every afternoon, even through winter blizzards.

Taking the copper baling wire off my bundle and first reading part of the paper before delivering it gave me a lifelong thrill that comes from cracking open each fresh newspaper.

As soon as I arrived at the University of British Columbia at age 18 I joined The Ubyssey student newspaper, a venerable publication that boasted a stellar cast of then-budding journalists, photographers, cartoonists, and editors authors who went on to long careers in the business, many working today in major media.

Imagine working on the paper that had helped launch famous journalists and authors like Pierre Berton, Joe Schlesinger, and Allan Fotheringham on their way to newspaper and literary stardom.

But the links to the past were still present then at The Ubyssey -- the classified ads in the mid-1970s were set in hot lead type at the venerable and now deceased College Printers on Maple Street in Kitsilano then, a living reminder of the golden days of newspapers.

I watched newspapers go from hot type to galley paste-up with X-Acto knives, line tapes and rollers to full computer layouts with no one touching the paper 'til it came off the press.

At 21 back in 1978, I also became a part-time reporter at the Vancouver Sun, wandering wide-eyed into a hallowed newsroom where you could see legends like Denny Boyd, Marjorie Nichols, Patrick Nagle, Fotheringham and a unique collection of characters, the likes of which I've never since encountered.

This was still the time of whisky bottles in the drawer and many drinks in the Press Club after work -- or even during.

But it was also the dawn of the computer age, and the typewriter jockeys were being dragged kicking and screaming into what became a very unsettling future that continues to be fraught with peril decades later.

Sadly, today's Sun newsroom is a model of decorum -- and dullness -- by comparison.

Newspapers are ultimately no different than other businesses in that there are no guarantees for succeeding indefinitely while technology changes -- think about Blockbuster video or even Blackberry cell phones -- but if you have to make bets, it's hard to beat Buffett's optimistic advice on newspapers.

"Papers delivering comprehensive and reliable information to tightly-bound communities and having a sensible Internet strategy will remain viable for a long time," Buffet told his Berkshire Hathaway investors. "We do not believe that success will come from cutting either the news content or frequency of publication."

We may mourn more individual losses, but the daily newspaper that adapts to changing times and provides online content should be around for centuries to come.