Another sign that 2010 will be the year we admit 20th century journalism is dead hit me recently when an editor who runs a community news website told me about an ethics problem he was having with a veteran reporter. 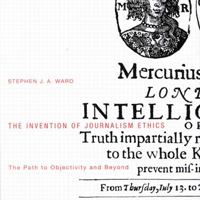 What would you call it, he wondered, if a freelance reporter sent you a news release reprinted word-for-word under his byline, and charged you for it?

"He doesn't mention where it came from? He does no research? No interviews? And he gets you to pay him for reprinting the news release that's circulating freely just because he adds his byline?" I asked, considering the question. "I'm torn: it's either plagiarism or genius."

That was this editor's thinking too: theft and fraud. (Not genius: he's unhappy to be cheated.) The reporter showed real moxy when he defended himself by alleging that this practice was well accepted in the industry -- something the editor doubts, so he was asking around to see if anyone else was slapping his byline on propaganda and selling it as news?

In that blatant a fashion: no. The issue in that case was that the writer misled his client.

But as an issue of journalism ethics it isn't quite as clearcut as it was even a decade ago. News media as a whole are running all sorts of self-serving propaganda and slapping bylines on it to make the content look like old-fashioned mediated news.

And it's probably time someone sent the public a memo.

Every time journalism reinvents itself someone christens it "new journalism." In fact, we've had the New New Journalism now for many a year, according to one book by a journalism professor. So I'm calling this change Really Super New New Journalism: You no longer have reporters, you have repeaters.

Content providers fill space, usually with advertiser-friendly offerings. Increasingly the content is designed to provide blatant support for political parties or special interest groups. That's because the financial incentive for news media has changed radically from the heady days when Woodward and Bernstein took down a president.

Killing off the competition

The new game began in Canada on Aug. 27, 1980. Black Wednesday, as it became known, was the day newspaper corporations across the country colluded to swap properties and kill competition. The Ottawa Journal and the Winnipeg Tribune folded, and the Vancouver Province's owner, Southam, bought the Vancouver Sun. The two had been in bed together since 1950s via a press-and-profit-sharing agreement at Pacific Press that killed the third paper and defended against upstarts.

Suddenly competition for readers was no longer necessary; these publicly traded corporations now focused on advertiser-pleasing copy as the technique for pulling more ads.

The shift was so radical, and so hard for those steeped in the Myth of Woodstein to accept, that today you still have journalists today arguing that much of what goes on in news media is "unethical." It's not. Not by any universally accepted standard. (Although for individual reporters, there may be personal ethical standards that prevent them printing known lies.)

The news business, as we of a certain age understood it, was based on an economic model that is less than 200 years old. From the 19th to the mid 20th century, newspapers were in the business of selling eyeballs to advertisers -- journalism was always just the bait on the hook.

Papers that began as partisan voices of political and social movements twigged to the fact that you could sell more ads if you offended fewer people. So publishers developed the strategy of "objectivity" in their reporting in order to compete for more readers, because circulation was connected directly to profits.

Journos of the day made a virtue of necessity. They incorporated some noble ideas about objectivity from political philosophy and science and with the help of literature, and later film and television, they convinced the public they were essential to democracy. Journalism came to be defined as gathering information and doing analysis on behalf of citizens. Reporters romanticized themselves as the champions of the public who "spoke truth to power" and reported "without fear or favour."

Shortly after Black Wednesday, and despite howls of protest from journos schooled in the previous economic model, publishers began pandering to advertisers with sections like Homes and Driving, featuring puff pieces. Papers produced "special advertising features" and "supplements" on education, weddings, health, business and entertainment -- any industry with a big ad budget. They no longer needed to court readers because they were the only game in town.

Journalism standards changed in the arts and lifestyle pages first. Gradually, restaurant critics stopped being anonymous and paying for their meals; some publications limited reviews to those who bought ads. Arts sections cut staff and hired freelance critics who were often involved with the companies they were reviewing. Papers began "sponsoring" shows -- promoting them and offering warm praise instead of reviews. Twenty years ago we all used to mutter about this being disgraceful in big city media.

Today, all of the above is so common that I was startled when an acquaintance asked why a local paper reviews the same restaurants over and over again. She wasn't joking: she still believes in the Myth of Woodstein.

By the time the Aspers took over Canwest-Global earlier this decade, those Really Super New New Journalism standards had crept into news sections everywhere. In 2010, the Vancouver Olympics obviously hurried the death of old-fashioned journalism, as reporters saw no shame in being shills for the event, and even ran in the torch relay. But the biggest change is in the way the craft itself is practised.

Last February former Canwest reporter David Akin, (now with Fox News North, as it’s called) famously killed Gordon Lightfoot on Twitter after picking up a tweet from somebody who heard it from somebody.

Check it out, dude

This morning, Dec. 16, as I am writing this, I listened to a CBC radio reporter on the Early Edition discussing a story on police use-of-force. He noted that he'd heard from his source about New Zealand police having a special gun-toting unit, but then added that he hadn't checked the source's statement.

What is the purpose of journalists if not to test the information for accuracy before passing it on? That used to be the difference between the professional gossips (us) and mere amateurs -- we spelled the names right.

Last month Vancouver lawyers were joking about a Sun front page story in which they reported a Supreme Court of Canada decision that was two months old -- although the piece claimed the decision had come down the day before.

Again, the publicly funded broadcaster covered itself in glory by picking up the Sun's story indicating that they hadn't even checked the decision themselves.

They just repeated what someone else said in order to fill space...

I blogged about that Vancouver Sun story back in November, but checking it online now, I see they've gone in and changed the emphasis of the story. Now they're reporting that their source spoke to them the day before. A nice sleight of hand that obscures the fact that they missed the decision two months earlier. In cyberspace, there's always the chance to back and fill, rendering standards applied to news reporting even more slippery.

At least Postmedia has an understandable reason for changing standards: they're legally obligated to maximize profits. But the fact that the commercial-free public broadcaster also ignores the public good suggests that there is a new definition of journalism.

Last month the Vancouver Sun's editor-in-chief Patricia Graham may have underlined the arrival of the Really Super New New Journalism in an interview with Vancouver Magazine. In discussing the journalists who inspired her she mentions "of course Oprah" -- which made the eyes of many an old-fashioned reporter pop.

Lady O is undoubtedly brilliant: she built a billion-dollar media empire by giving the people what they want. Whether she's advocating some celebrity-endorsed quack therapy or advising her fans to wish away their problems with The Secret, she has a genius for engaging middle-aged women.

But the grizzled 20th century journalist, or even a fairly old New Journalist, wouldn't call Oprah's heady mix of magical thinking and celebrity worship "journalism" any more than anyone would call a Big Mac nutrition.

But Graham is editor-in-chief at one of the leading papers in the country's largest chain: if she says that a peddler of infotainment content like Oprah meets the definition of journalism, I think we have to believe her.

Which mean it's time to give one last nod to those old journalism standards for ethics and professionalism and discuss the Really Super New New Journalism in public with our fellow citizens.

End of an era

Of course there are still old-fashioned journos producing old-fashioned news in the few relatively competitive markets left. The Toronto Star and The Globe and Mail come to mind. As does CBC radio national, which continues to deliver shows like The Current, The House, and Q despite cutbacks from a Tory government that is attempting to silence one of the few watchdogs left.

But I suspect the noise they're making is just a death rattle. It's clear the term journalism has morphed to mean any space-filling content. And when media historians look back and try to determine the tipping point between old journalism and new in Canada, I think they'll settle on 2010, our Olympic year.