What if celebrity news carried its own version of a nutrition label? But instead of calories, or health risks, how about a label that gets at celebrities' impact on the planet? 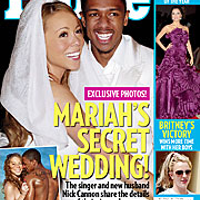 Imagine if each time a tabloid or movie or TV show fed our celebrity addiction by running the image of Angelina, Bono or Gisele Bundschen, they also were required to put the celeb's eco-footprint in the corner of that image? If the tabs really wanted to knock themselves out, they could also run a kind of eco-ingredient list -- the number of hours the celeb spends in the air, the square feet of housing she owns, number of children he has, and so on.

It's an idea with real timeliness, if I do say so myself. A few weeks ago, uber-feminist Naomi Wolf praised Angelina Jolie's independence, symbolized by her ability to fly her own plane, without even mentioning that if every woman did that, we'd need a million planets worth of resources to support the human population.

Wolf is far from alone. This week, the top story in several tabs was that Jolie has resumed "one of her favourite hobbies...flying lessons!" without making any comment about the relative impact on the planet of flying to, say, knitting or karate.

And the Daily Mail ran a piece about how Victoria and David Beckham were in the Seychelles one day, then Heathrow, then LA the next. How smoggy their designer footprint must be!

But these stories, and most others, tell us nothing of the impact of celebs' enviable lifestyles.

Last week, Carbon Footprint calculated the impact of U2's world tour. Ironically, U2 is outspoken about their commitment to the environment, but carbon output of their tour this year is far bigger even than Madonna's high-maintenance carbon-heavy tour. U2's carbon emissions will equal that of 90,000 people flying from Dublin to London, and are equivalent of the waste created by 6,500 average British or Irish people in an entire year (equal to leaving a standard 100 watt light bulb on for 159,000 years). "To offset this year's carbon emissions, U2 would need to plant 20,118 trees."

This story hit media outlets around the world within hours, demonstrating that not just me but a lot of people actually are interested in such information. (I'm guessing we belong to the same tribe of label readers at the grocery store.)

But it's not enough to calculate footprints for the odd tour or movie. What the public is most often consuming is celebrity lifestyle information. And we need good information about what that actually costs.

How to read an eco-footprint

People follow celebrities because "reality is scary and the surreal is not," says Dr. William Rees, the UBC professor who invented the concept of the ecological footprint. "We have made wealth and glitter and this false world of celebrity into the ideal, and people glom onto it." But, he adds, "in a sense, doing an eco-footprint of these folks might help ground us back into reality."

He said it's easy to calculate an eco-footprint: it's simply a person's consumption on an annual basis. And 85 per cent of it is made up of fuel, food, housing, and space heating.

Rees says that for the average individual, by far the biggest component is private transportation using fossil fuels: cars and plans. "Let's face it, most celebrities have half a dozen of those and travel by private aircraft."

The next item is food, because for most people, food travels long distances and therefore takes fuel, and it also consumes pesticides and so on. "Celebrities tend to have very high-end diets."

The next major category is water and space heating, and "the bigger your house and car, the larger your consumption of those." Of course, many celebrities not only have one large house, but many of them.

Rees said that there are only two hectares on the planet to support each person, but the average North American uses nine hectares, which means most North Americans need three to four times as much productive ecosystem as is available on the planet to support their needs. "The really inconvenient truth is that the current global development path is an impossibility serum."

What planets do they live on?

I plugged in the consumption numbers for an imaginary celebrity into this footprint calculator and this one, too. I assumed that the person had a private jet, flew more than 400 hours a year, had at least two large houses, and owned more than one car. Those consumption amounts exceeded the maximum inputs on the survey -- there was no category for more than one house, or for private jet, for example. But even given that, the survey found it would take over 60 earths to support that lifestyle for everyone.

But then, celebrities aren't everyone, are they? They live on 60 or even hundreds of planets, while the rest of us inhabit one that's arguably in deep trouble. I'm not holding my breath that my modest proposal would ever be taken up by a media industry so invested in feeding our celebrity worship.Ê But I'll keep dreaming of truth in labelling.