Robed in a flowing, full-length purple cassock, the Rev. Canon Melissa Skelton stood with her back to the crowd of over a thousand people in Vancouver's Convention Centre last Saturday and faced her inquisitors: fifteen bishops of the Anglican Church. She answered each of their questions in a clear, confident voice. 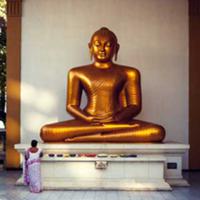 The slim, grey-haired grandmother was about to be ordained as Vancouver's first female Anglican bishop. Formerly a brand manager for Procter & Gamble, Skelton is also the first businessperson -- and first American -- to be made Bishop of the Diocese of New Westminster, headquartered at Christ Church Cathedral in downtown Vancouver.

As a Roman Catholic, I attended Melissa Skelton's investiture partly out of curiosity and partly in solidarity. It was the first time I'd participated in an Anglican service and I was struck by the similarities with my own tradition; the prayers and responses were practically identical.

I was struck, as well, by the differences. The rows and rows of mostly white-robed Anglican prelates, priests and deacons included many women -- so unlike Catholicism's male hierarchy, which steadfastly refuses to admit women to the ranks.

A struggle for inclusion

Some maintain the real problem is that the male clergy in primarily orthodox religions fear that if they were to open the door to a female clergy, the women would outshine them. No doubt, some would. As Bishop Greg Rickel of Olympia, Washington, said in his sermon at Skelton's ordination, there are two kinds of bishops: "those who like being bishops, and those that want to grow the Church." Skelton, he said, was definitely in the latter group.

Earlier in his sermon, Rickel jokingly shared with Skelton a pearl of wisdom he'd acquired. "If anyone brings you something and you don't know what to do with it," he advised, "kiss it, bless it, and it will go away." I couldn't help reflecting how aptly this describes the Catholic Church's attitude toward women.

It's worth noting that even in the earliest days of Christianity women held crucial roles. Jesus himself was scathing in his criticism of unjust traditions, such as the separation between men and women that was prevalent in contemporary Palestine.

He also criticized the Pharisees' fondness for imposing the letter of the law while ignoring its spirit. Clearly, Jesus was a rule-breaker and an innovator, yet many Christian denominations, including my own, persist in flagrant sexism against women, citing rules and tradition as their justification.

In contrast to the Catholic Church, the Anglican Church in British Columbia has famously struggled under outgoing Bishop Michael Ingham to be inclusive of all groups.

The result has been tension, division, renewed loyalty from the faithful who've stayed on, and defection to more orthodox congregations by the too-deeply dissatisfied. The Catholic Church and evangelical churches have been delighted to receive the defectors into their folds. It makes one wonder if Christianity is really about faith in God or is it, perhaps, about belonging to a group of like-minded people?

Accept, or move on

There was quite a bit of argument in the Anglican Church as a whole, back in the 1980s, says a man named John who attended the ceremonies. John is a leader in Skelton's former parish of St. Paul's, in suburban Seattle. He says that some of the older, hard-core priests were sure then that they could never accept the idea of a female priest, but even they have come to accept it now.

Rev. Donald Grayston, an Anglican theologian who taught religious studies at SFU for many years, says those Anglicans who couldn't accept women priests have moved on. There's no longer any opposition. In choosing to ordain women, he explains, the Anglican Church hasn't really changed. "We continue only to ordain human beings, some of whom are female, some of whom are male."

Grayston's opinion is that women prefer to be chosen only if they're the best one for the job. "And that's exactly why Melissa was chosen," he says. "She was head and shoulders above all the other candidates." Skelton doesn't just have the requisite Master of Divinity degree, but also a Master of Business Administration and an MA.

Nine years ago, when Skelton was brought in as pastor of St. Paul's, it was on track to go bankrupt within a decade. Now, the parish is thriving.

"My [former] parish is an Anglo-Catholic parish," she says, "so it's all about beauty, mystery, chant, silence, song. We're flooded with young people. We've tripled in size in the last nine years."