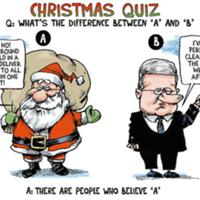 Please Advise! All Harper Wants for Christmas Is Good PR

Re: What we "infidel atheists" celebrate during Winter Solstice

I understand you believe you are practicing inclusiveness by wishing us "infidel atheists" the best of the season and speculating on what we celebrate in December when you are enthusing over the birth of Christ.

Well, in all good cheer, let me wish you in return a Happy Winter Solstice!

You do realize you sound like a fool when you assume the holiday you borrowed from centuries of nature-worshipping pagans belongs to you and you alone?

You, my friend, are celebrating Winter Solstice whatever you like to tell yourself. If you doubt this, have a closer look at the customs that you probably think are Christian.

There's the mystical evergreen tree that we decorate with lights and idols, the feasting and drinking, the light displays (to seduce the gods into returning the sun), the bells and noisemakers (to ward off evil spirits) and especially Santa Claus "that jolly old elf" with his magical flying reindeer. There's nary a cr&egraveche in sight in most people's Christmas parties because whatever we call it -- Christmas, Saturnalia, Yuletide -- what the northern hemisphere has always celebrated is the light returning at Winter Solstice.

Have a very Mithras Christmas!

The Christmas in which you believe is little more than a clever rebranding campaign orchestrated by some wily Dark Age monks hell bent on converting heathens. The early church began reinventing Winter Solstice somewhere between the fourth and fifth centuries when they hijacked the various festivals and gave them a Christian veneer.

Jesus has no official birthday according to the Bible. (You say you celebrate the birth of Christ, so I'm guessing you've read the Bible, yes?) But Dec. 25 was the Feast of Mithras, a sun god who was hot in the ancient world, so old Christianity's communications strategists claimed the day.

Then they started reinventing Saturnalia's customs and symbols to fit the Christian myth. For example, attempting to prevent people decorating with holly was a lost cause -- the plant still seems irresistibly magical as it stays green and bears fruit while nestled in snow. But they could change its meaning, repositioning it as Christ's blood-specked crown of thorns. (As communications campaigns go, it's genius, and as a politician yourself you really should take note of their tricks.)

Literacy was a rare thing in the early Middle Ages, so they just ignored scripture, which suggests that Jesus was actually born in the spring. The evidence is right in the carols: "while shepherds watched their flocks at night." Are you a lifelong city dweller, sir? Here's a tip: no one leaves lambs out at night during Winter Solstice, not least because lambs are born in spring.

Most of the pagan cultures embraced some form of nature mysticism and they were great believers in balancing the extremes -- good and evil, dark and light, power and penury. As part of their nod to the Powers That Be, people switched social roles during the solstice. In medieval times, a Lord of Misrule was appointed from the peasants, and he ordered the gentry about. The peasantry went banging on the doors of their masters demanding food and drink, and the carol, "Here we come a wassailing" celebrates that bit of old mysticism.

The (Puritans') War on Christmas

I don't mean to be indiscreet, but did no one tell you about the Protestant Reformation in Europe and how the Puritans actually made Christmas illegal in Scotland (1583) and New England (1620) due to its obvious paganism? After Cromwell and the Roundheads won the civil war they issued a law banning public Christmas celebrations in England (1644).

That proclamation points out that their forefathers have, "...turned this Feast, pretending the memory of Christ, into an extreme forgetfulness of him by giving liberty to carnal and sensual pleasures."

If you didn't have your head so far up your Christmas stocking -- another bit of heathenism, I might add -- you would know that many a Christian today is still uneasy about the Christmas con. Jehovah's Witnesses, for example, having always rejected Christmas for what it is: paganism by another name.

These people are neither atheists nor infidels, sir; they just have a better grasp on history than you.

So given that this is gift-giving season, you might want to ask Santa for some books to prevent you putting your foot in your mouth again. May I recommend Stephen Nissenbaum's The Battle for Christmas. And Penne Restad's Christmas in America: A History.

In the meantime, here are some facts that will provide you with a little more room for shortbread.

The Puritan backlash succeeded in killing Christmas for almost 200 years in Britain and its colonies. Later, the Victorians resurrected Christmas as a shopping festival to drive the industrial revolution's growing consumer culture. They looked to medieval Christmases for inspiration, resurrecting the parties, music and feasting, while inventing a host of Christmas customs designed to boost business. Social reformers like Charles Dickens sentimentalized the holiday and promoted notions of charity and kindness, which were much needed in the brutal economic landscape of the era. (Which, I feel duty-bound to note, our own economic inequality is beginning to resemble.)

What would Schmutzli do?

But in the wilds of northern Europe, the pagans never lost their hold on Christmas. My Swiss relatives celebrate St. Nicholas Day, Dec. 6, with a visit from a lean and austere looking medieval-style Father Christmas (who hands out gingerbread and chocolate), and his companion, Schmutzli. The latter is a foreboding figure who beats naughty children. He comes in a number of guises, and often has horns, which are a reminder that those pagans in the Alps worshipped powerful animals with antlers: stags, elk and yes, reindeer.

Are you getting a hint as to why that magical Santa Claus is accompanied by flying ungulates, Mr. Pallister? Do you still think that's a Christian Santa Claus?

While you're entitled to celebrate whatever you like, sir, it's presumptuous of you to assume that superior tone. The Christmas veneer on Solstice has always been mighty thin, and it's beginning to disappear altogether, even in the Puritan-influenced world. Lately Schmutzli's German incarnation, Krampus, is experiencing worldwide popularity, and festivals are springing up even in the U.S.

Although I notice that Americans, influenced by their Puritan origins, think Krampus looks like the Devil -- horns, cloven hooves, a tail -- it's actually the other way around. The heathens dressed up as powerful antler-sporting animals, so the Christians turned horned animals into the embodiment of Lucifer as part of their rebranding project.

But here's the thing, Mr. Pallister. As someone who aspires to be premier of Manitoba, you should have noticed that in Canada, the majority of us don't practice any religion at all, although we may have some cultural ties to one. For example, when some ill-informed zealot tells me Jesus is "the reason for the season" it's only generations of WASP-y repression preventing me from launching into a history lecture on the spot. Perhaps it's the influence of all those warrior Celts among my ancestors that gives me the urge to write you today.

A Pew study on religion in Canada found that about 24 per cent of us are unaffiliated with any religious institution, and among those of us who do claim a group association, only 27 per cent attend religious services. Given that we're also home to significant numbers of Jews, Sikhs, Hindus, Muslims and a few other groups including Jedi, along with the Christmas-opposing Christians, I think you're mighty naive to assume everyone who declares a religious affiliation is celebrating your kind of Christmas.

That's right, Mr. Pallister: you are in the minority. Despite charming propaganda along the lines of A Charlie Brown Christmas, the vast majority of us continue to celebrate the return of the sun, not the arrival of the Son. Just as our ancestors always have.

We're old-fashioned Winter Solstice revelers who place no religious significance on Christmas at all. It's an excuse to be kind to others and party with friends and family, both of which serve to get us through the dark days and keep our economy afloat.

So there you have it, Mr. Pallister. That is what most of us are celebrating this Winter Solstice -- even you. Although you clearly drank the Kool-Aid those Dark Age monks were passing around.

Still, I wish you a Merry Christmas. But be warned: if you persist in your aggressive ignorance you can expect that Schmutzli might crack a whip in your direction or St. Nick will dump a lump of coal in your stocking.

Well, metaphorically speaking, I suppose that is what happened to you this Winter Solstice.

It really is a magical time of year, isn't it?