I have been doing a lot of measuring lately: gigajoules, kilowatt hours, hours of air travel; servings of poultry, cantaloupe, pasta; kilometres travelled by car, bus, SkyTrain. Grams, too, of mixed paper, glass, metal and little white Glad bags of garbage bound for the black bin. 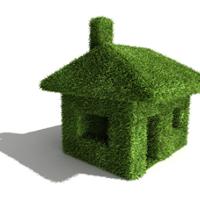 Call me crazy, but I am not alone. No fewer than 23 of my neighbours on the same block in Vancouver's Riley Park are doing the same, every night for two weeks to a month -- all to support Phase One of Project Green Bloc.

Green Bloc, supported by the Vancouver Foundation and sponsored by the charity Evergreen, aims to reduce the ecological footprint of our neighbourhood by 25 per cent in three years. At the end of the survey, each household will get a measure of its footprint and learn how this compares with the average for the 'hood.

A series of dialogues will follow, each one professionally facilitated and built around a delicious meal so that neighbours get to know each other, learn about their consumption patterns and agree on a project they will design and implement to improve the sustainability of our block. Other activities will follow and after three years, we will repeat the survey to see if we have met our goal.

The project is all about building a stronger, more resilient bloc of engaged citizens -- and, yes, it's about pleasure: getting to know one's neighbours, sharing good food, joining forces on a project that makes our vicinity greener, more livable.

There is no place for guilt-tripping and shame, as I have reassured many neighbours since telling them about the Green Bloc grant proposal I helped write.

But here I confess, I am on a bit of sticky wicket, to use a cricketing metaphor. Though I religiously enter my measurements in the survey each night, the real footprint ledger I am keeping is a secret one, with columns headed Pride -- and its flipside, Shame.

Under Pride, with day-glo highlighting and gold stars, you will find our household's below-average usage of natural gas (thanks to my utterly brilliant, if rather expensive, decision to invest in on-demand water heating). My fuel-efficient Honda Fit is also parked here, and there are line items for our relatively red-meat-free diet and big pungent compost heap. Hours of air travel in 2012 are also here, but with a comment bubble that reads "Lucky they didn't ask for 2013, year of our family holiday in Europe."

Imagine my mixed feelings then the night we threw out the carpet, the one in the living room that a friend passed on eight years ago. I was glad that we would get it out and see the refinished oak floor of our 85-year-old bungalow. That was a relief.

The other consequences, for my ego at least, were terrible. After all, I was going to have to weigh the carpet and underlay and report this huge disposal in my Green Bloc survey. All our other bags of garbage had been miniscule, weighing only 400-500 grams. But it had taken both me and my partner to lug this carpet out to the garage, and it was going to enlarge our footprint way beyond the average -- for waste, at least. 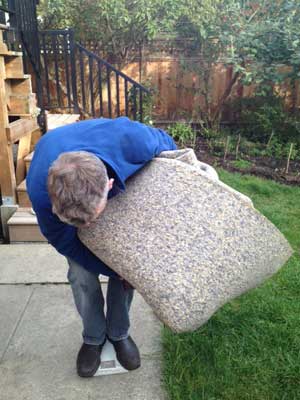 My partner and I looked at each other. Was that fair? After all, we weren't sure everyone was being so candid about their landfilling. And didn't I get points -- or absolution -- for having included my dog's daily offerings in the garbage total?

I called our project sponsor Evergreen to check. I didn't like the answer: "Yes, weigh it," said no lesser authority than co-author of the survey Dr. Jennie Moore, PhD -- disciple of UBC emeritus professor Bill Rees, the guy who invented the very concept of the ecological footprint.

So we weighed it on our bathroom scales (it was way too big for the puny kitchen scales provided by Evergreen), and it clocked in at a whopping 42,500 grams.

Now, I prefer not to think about my secret spreadsheet. I am imagining the image of the household footprint I am going to receive next month, with four delicate little toes and one giant throbbing toe. But, really, it's no big deal. I'll get over it. After all, this is about pleasure.