There was a time, way back in the middle of the last century, when White Rock and Birch Bay, Crescent Beach and Cultus Lake, Bowen Island and Belcarra all teemed with modest summer vacation cabins. "Any middle class family could escape to one of these places," says Jo Ledingham, sitting at a big oak pedestal table in cabin #1, 10 Tum Tumay Whueton Drive, in Belcarra Regional Park. 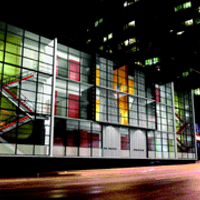 Today, where once there were charming little getaways there are now extravagant waterfront residences fit for a hospital new-home lottery or a real-estate magazine centrefold. Just north of the Belcarra park, someone recently built a bridge from Turtlehead across a shell beach to Hamber Island, and yet another big house is in the works. Ledingham sees her string of seven waterfront cabins -- modest, charming places with boats under the front porches and bluebells lining the paths to the back doors -- as the one of the last intact living remnants of a gentler Vancouver history.

Soon that remnant, which sits on the far side of Indian Arm from Deep Cove, may be gone. In February, Metro Vancouver sent a letter terminating the leases of the seven residents of these unlikely homes, one of which may date to 1912, although they were all most likely built in the 1920s and '30s. Unless the residents can convince the regional district's environment and parks committee to change course, with an appeal to be heard this Thursday, May 16, they will almost certainly be demolished.

Ledingham came to her home in 1964. There was a business card in the window when she first saw it, and she called the leaseholder, the Lindal of Lindal Cedar Homes. He didn't want to rent it to her, but his business moved to Washington State, and a few months later he changed his mind. In 1971, says Ledingham, the Greater Vancouver Regional District, as it was then known, expropriated the property from its owner, a man said to be a "Lebanese financier," and told the residents to clear out. Instead, they created the non-profit Belcarra South Preservation Society, fought the eviction plan, and for much longer than anyone expected the regional parks authority let the cottages be.

As it should continue to do. After all, the only reason they have lasted, the only reason we have the opportunity to even think about preserving them, is because these cottages are in a park.

There are many parks in Canada where unique private residences exist for this reason, and they continue to enliven the public's experience of those parks. I've certainly seen a few. In Cypress Provincial Park, there are ski cabins from another era, not far from the 1926 cross-country day lodge. On the Toronto Islands is a car-free community of 250 modest homes that provide the Islands with their greatest charm and sense of human history. In the South Chilcotin Mountains Provincial Park, wilderness guides hold leases on old prospectors camps, with the odd log cabin, that link visitors' experiences to another era. On Canoe Lake in Algonquin Provincial Park are the scores of ramshackle cottages that once attracted Tom Thompson, and continue to provide the lake's essential difference.

Most of these places have run up against the idea that it's not proper for people to have private residences in a park, and fortunately the recognition of their historical value has ultimately prevailed.

In Belcarra's case, there hasn't really been an open public conversation about what is the best thing to do with this unique legacy. The residents have not had a chance to make their case to Metro's political decision makers. In the meantime, regional parks planners do what's in their bones -- protect natural amenities and build walking trails and picnic tables for day use by the public. "We're not in the housing business," says Frieda Schade, Metro Vancouver's regional parks central area division manager. "We're in the environmental protection and recreation business."

Jo Ledingham and the other residents know they have to share the park, and the pocket beach in front of the cabins. And of course they already do. "On Saturday and Sunday there are a lot of people on the beach," Ledingham says. "But there are no drinking parties, there are no fires." She says people are often curious about and delighted by the cottages that overlook the beach, and she's had many conversations with visitors about the history of the place. The residents sometimes see themselves as interpreters and caretakers of a sort, and watch for people digging clams or poaching crabs. Once, Ledingham swam out to rescue a kayaker who thought he was drowning. So it's ironic that liability is one of the issues that Metro staff have raised over the years for wanting to be rid of the cabins.

The last time the idea of eviction arose was in 2005, when the Walkerton water contamination deaths had municipal governments flipping out about private water systems. Little came of it in the end, except that the Belcarra South residents installed a local spring-water system (UV purification, tested weekly, approved by the Fraser Health Authority) that would have cost $40,000 if the residents hadn't done a lot of the work themselves. Michael Elson, a neighbour who has joined Ledingham at her dining table, doesn't think much of Metro staff's belief that the water is a risk to their health. "I don't think anybody has better water," says Elson, who has lived almost all of his 39 years in one of the cabins. 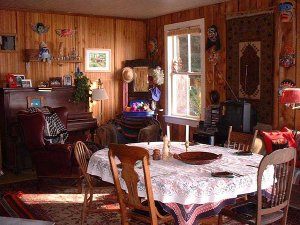 Residents have also heard concerns the water system capacity is inadequate, even though it's fine for their purposes. "We don't have dishwashers, we don't have washing machines, we don't have spas, and in the summer we're careful," says Ledingham. In fact, the community demonstrates that it's possible to live quite lightly on the land -- not with heat pumps and Energy Star stainless appliances and expensive double-glazed windows that may fail in 20 years, but by making do with less, in the manner of another century.

More than one way to count cost

Until 2005, the lease arrangement could be terminated by Metro Vancouver with a year's notice. Now it's six months. To keep things simple, they pay rent as a group -- currently a modest $3,420 a month, although Elson figures the total rent has been nearly $1 million over the years. And they are smallest of burdens on municipal infrastructure. In addition to the water system, they maintain the road above the cabins, and keep the homes in pretty good shape considering the uncertainty of their tenure. Which brings us to another irony.

Metro staff argue the buildings are in "such a poor state of repair" that restoring them to a heritage-worthy standard would cost about $800,000 altogether -- $103,000 for Ledingham's cottage alone -- and as Metro can't reasonably expect that of the residents and can't afford the expense themselves it's best to send them on their way. Schade cites a fall 2012 report by McGinn Engineering and Preservation Ltd. However, another report commissioned by Metro dated January 2012 shows different needs. The first inspection report estimated the necessary repairs to Ledingham's cottage, including a new roof, would cost just $10,600.

What the residents want, says Ledingham, is an opportunity to articulate to Metro a vision of a park that includes the cabins. They would like that conversation to include the municipalities of Belcarra and Port Moody, between which the cottages are divided, as well as the park users and the broader community. They would like it to be seriously considered.

Schade said the residents met with staff regarding the eviction, and that when informed of the decision to evict the residents the councils of Belcarra and Port Moody raised no objection. Metro does intend to preserve an eighth building, Bole House, occupied by and named for the family that pioneered the development of Belcarra as cottage country, and may renovate it at its own cost as a potential residence for a park caretaker. Schade allowed, though, that the possibility of preserving the smaller cottages has never been widely discussed. "They have always been left out of the plans for the future of the park." 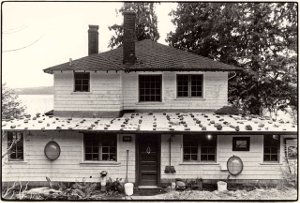 Many, of course, would argue that parks should simply be about nature and recreation, but of course they're not. They are about memory and history, as any number of museum-piece buildings in parks across the region attest. But here's the thing. Unlike Hollyburn Lodge and the neighbouring cabins, or the Canoe Lake cottages, or the Belcarra cabins, which continue to be used much as they were in the past, a lot of those buildings become artifacts, and often expensive and underused ones.

Richmond has several of those museum pieces, and is better for it. But its greatest act of preservation may be Finn Slough, another self-sustaining community of modest old homes that exists rather perilously outside of the world of traditional land titles on the foreshore of the Fraser River east of Steveston. Once, many people saw it as a blight. A real estate development company that owned adjoining land briefly saw Finn Slough as a money-making opportunity.

Now it's promoted as historic site on the City of Richmond's website, and is considered by many a national treasure. Finn Slough has been compared to Nova Scotia's Peggys Cove, and it isn't exactly, just as it's not quite right to think of Belcarra as Indian Arm's Finn Slough. But they are both living history. And in Metro Vancouver -- where, as one wag once said to me, real estate development is the only industry -- we have precious little of that.

When Metro Vancouver's environment and parks committee considers the Belcarra South Preservation Society's appeal, they should ask if it's right to pause and to see if there is another way forward, if the love and commitment of the Belcarra cottage residents might be harnessed to enhance something special. Perhaps Bole House could become the society's project, instead of Metro's.

Certainly the residents know that if they are to stay there must be change. New protocols for occupying the cottages would have to be established. The septic systems are too close together, and composting toilets are an option. Of course the cottages need repairs. Whose doesn't? How much would the residents be prepared to spend on them for some security of tenure? The question has never been asked.

Nor has anyone asked if there are more committed stewards for Belcarra's lovely little slice of history than the residents of those cottages. Ledingham remembers once calling Tsleil-Waututh community leader Leonard George with a gripe. The new park road under construction at the time was not Tum Tumay Whueton Drive, in honour of the name of the village that once occupied the site. Back then, it was shown on the plans as Admiralty Road. With a phone call, that changed, and with a little more effort so can the culture of how we think about and manage our parks. The Belcarra South Preservation Society would like to be a part of the shift.