Kai: I got the news over Twitter a few weeks ago that Justin Trudeau had TKO'd Patrick Brazeau in their charity boxing match in Ottawa. A strange sensation welled up in my shrivelled heart, singed by service as a legislative reporter. It felt like affection, but for a politician? 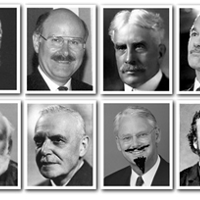 Getting home, I fired up the Sun News site (best 16 minutes of Sun programming ever, I will happily admit) and watched Trudeau pound the cocky Conservative senator into bloody submission. Yes, it was affection. Affection for the silver-spoon son of a prime minister who alienated Western Canada and sent tanks into the streets of Montreal. Affection for a guy who earns more than $150K a year for wearing a suit and mouthing empty platitudes.

So Crawford, what's the deal? Am I crazy?

Crawford: No, but we need a 12-step program for your condition... which I share.

Kai: You too? I don't know, it seems like a pretty harmless affliction. I mean, how much farther could Trudeau be from power? The Liberal party looks like it's caught in the Death Star's trash compactor. Luke, I mean Justin, has ruled out even running for the party leadership. As Michael Den Tandt astutely pointed out heading into that boxing match, Trudeau really had nothing to lose.

Contrast that with Stephen Harper. Doesn't make eye contact. Shakes hands with his own kids. Pauses his speech if the teleprompter stops working. Makes a 10-year-old sing his favourite song first -- not hers -- for a campaign photo-op. The last time he might have pulled off "harmless nerd" was during his Reform Party days.

Crawford: And he single-handedly refutes Henry Kissinger's adage that power is the ultimate aphrodisiac.

Kai: Yikes. We should make clear this is not about a left-right spectrum. What I'm describing really does seem to correlate with one's proximity to power. Look at prime ministerial hopeful Michael Ignatieff. As the federal election loomed last spring he popped up in Quebec City, promising a new hockey arena like it was a pet pony, all in that condescending Parisian accent. When he stopped to take questions, we in the press gallery utterly savaged him. There was something primal about our reaction to his pork-scented tournée.

A month later, it was clear he had no hope. He spent the last days of the campaign capering around farmers' markets in red Chuck Taylors, yelling "Rise up! Rise up!" like a guy you'd meet on the night bus. And I liked him for it.

Crawford: I saw him in that mode too. It worked better on TV. In person, he looked like an academic trying to impress his students. As an ex-academic, I sympathized, and sympathy is the first step toward the condition we call demagogalgia: The irrational fondness for a politician who is no longer either useful or threatening.

Kai: So it has a name. But I wonder now, does it work in reverse? Take newly anointed NDP leader Thomas Mulcair. With a legendary temper and what the Conservatives are framing as an opportunistic streak, I'd imagine Mulcair would want to become more likeable the more serious he is about taking power. He would need to defy the trend, like his predecessor. Jack Layton's cheerfulness could feel a bit forced, but his party's rising fortunes never made him act pompous or nasty.

So is Mulcair doomed to become, as Bob Rae taunted him, "mini-Harper"? Increasingly ruthless the closer he gets to power, like a shark following a blood trail? Or will he reinvent himself as the "happy warrior," like Jack Layton brandishing his cane -- or Justin Trudeau, grinning as he gave Patrick Brazeau the Hemingway treatment?

Crawford: There's a difference between disliking a politician because of his personality and disliking a politician because of his policy. Plenty of Canadians hated and feared Jack Layton no matter how much charm he turned on, because he was a left-winger -- and popular as well. Now that he's no longer a threat to them, they can sentimentalize about him.

Kai: Except for Christie Blatchford. But go on.

Crawford: It's extraordinary how widespread demagogalgia has become. People are actually fond of Diefenbaker. Mike Pearson suffered endless slings and arrows in his minority governments, but now he's our patron saint. That dropped football cost Bob Stanfield a victory, but now he's the best prime minister we never had. Joe Clark seemed like a pompous nebbish in power, but when I met him in a supermarket in Wakefield a couple of years ago he was a charming and affable man. I suffered serious dental damage from grinding my teeth during the Mulroney years, but now I cheer up when I hear his voice.

Kai: You're right, even his descriptions of cash-stuffed envelopes are delivered in that soothing, statesmanlike baritone. I get goosebumps.

Crawford: If he'd worked for the CBC, he'd be up there with Gzowski.

This is not, by the way, just a Canadian malaise. Think about the U.S. Republican far-right lunatics who now invoke the happy memory of JFK and even FDR. Democrats are fond of Barry Goldwater and the late William F. Buckley, who in hindsight were both too far left for today's GOP. Churchill spent most of his political career being despised by everyone as a drunken warmonger, but now he's the saviour of the western democracies. And a lot of Russians still love Uncle Joe Stalin.

Kai: So do we have nothing to fear but the fear of demagogalgia itself? Or should you and I seek treatment?

Crawford: Early-onset demagogalgia is dangerous -- that's when you start to tolerate a still-dangerous politician just because he or she has been around a long time. Preston Manning is a case in point.

And even when we admire the has-beens like Mulroney, and the no-hopers like Justin Trudeau and Elizabeth May, we need the 12-step program. Without it, we forget that the leader isn't the real problem -- it's the leader's policies and the people who like those policies. If we insist on personifying the real threats to our way of life and our institutions, our enemies just need to rebrand.

Bill Bennett resigned in 1986 and bought the B.C. Socreds five more years (and while no one misses him, we love his successor Bill Vander Zalm). Gordon Campbell tried the same tactic when he quit in 2011. Whether Christy Clark out of power will ever become the object of our affections remains to be seen. But even I, a terminal demagogalgic, don't think so.