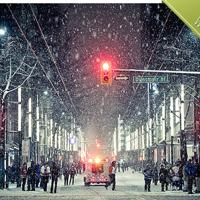 Hard to predict what brings a person to do this job. They might be working to pay for nursing school. Might be a recent immigrant, or a female kickboxer. Might be an insomniac writer looking for some blue-collar cred.

Regardless, I will be the person tonight who interrupts your stairwell blow job. Sorry. I will take your backpack full of liquor when you sneak in the back door, and I will confiscate your sword. When you try to jump off the roof, I or one of my colleagues will hopefully be there to tackle you. (The saga of LSD girl and the softest cops in East Van, farther down.)

I know, I'm no fun. I'm the sober guy at the party, trying to stop you from throwing smaller people into the ceiling. I'm like a hockey linesman crossed with a pool lifeguard. Always ruining good fistfights and trying to stop asphyxiations.

I admit you make me curious, Vancouver club-goer. I've been studying you, and I have a question I can't answer. Why do you believe you're special?

Let me explain. As sociological experiments go, a big nightclub is pretty fascinating. It's as if someone said "let's put a thousand castaways on an island, get them drunk, and see how long they can maintain a functioning society." A few simple rules apply. When people break them, they get to talk to me.

One thing bouncers are asked to do is stand at the top of the stairs, checking stamps on wrists. There is a logic to this, beyond making sure people have paid cover. For my own peace of mind, I want to know that everyone going down has been frisked for weapons and counted. Have you noticed how in fatal tramplings and fires, the club always turns out to have been "over capacity"?

Still, all night I have a string of wannabe VIPs yapping in my ear about why they don't need to follow this basic custom. Many claim to be DJs; others, distant cousins of DJs. Several believe they should try before they buy. Others are reportedly the victims of mysterious teleportation -- either of their wallets or themselves. Some shout. Some wheedle. Some pout. Some hug. (Surprisingly awkward, it turns out, when you have implants.)

Asking people to display their wrist never fails to bring out the latent cases of Oppositional Defiant Disorder. Girls shoot me murderous glances. Guys feign deafness and try to barge past. Some try bribery. The more audacious just make a run for it. None of these tactics work.

A few patrons at the bar are different, no question. The fact is, the rules don't apply to everyone. We'll deal with that in a moment. But the tiny percentage of privileged individuals can't possibly account for the proportion who seem to truly believe they deserve special treatment. Where did this notion come from? Not booze. That's a cop-out. Something else is going on.

Standing in the foyer, I hear a stressed-out voice in my earpiece. The club is overflowing, they've opened up an extra room, they need a security guard. I say "10-4" or something cool on the radio and push through the swinging door.

There's a guy dancing on a table with a beer in his hand. In the time it takes me to walk over, he overbalances, knocking a girl over with the table as he falls. Bottles and glasses shatter and spill as his skull bounces off the linoleum.

"Come with me, please," I say, helping him to his feet. "Time to go outside."

"I'm not leaving!" he shouts as I guide him toward the door. "You don't know who I am!"

He's right. It turns out he's the owner's son. One of the managers gives him a playful wake-up slap on the cheeks and sends him back inside to party.

See? That's a special person. His family owns the building. Once inside, he can behave however he likes. In his father's fiefdom, he is the one per cent.

I'll give you another example. I'm checking stamps when a small cannonball comes shooting past at waist level. I catch the girl with one arm and she possums, collapsing into a ball at my feet. Another bouncer comes running over. "She ran past us at the front," he explains. "Well, she doesn't seem to have a stamp," I say. He rolls his eyes and picks her up like a sack of potatoes, carrying her outside on his hip.

Five minutes later I hear yelling over my earpiece. "She's on the roof! I need someone out here, now!" Two security guys and a manager go sprinting past me. Disjointed updates on the pursuit filter through. "Fire escape!" "Ladder!" "9-1-1!" On my left, a guy comes staggering up the stairs with blood all over his face, supported by his friends. I realize I'm the only bouncer left inside. Another wounded combatant emerges from the depths.

Later, I join the other staff standing around LSD girl, as she has now been dubbed. She's huddled on a chair, sulking. We all congratulate the guy who made onto the roof in time to intercept her as she made a run for the edge. Two police officers show up and thank everyone for waiting.

"Look, I'm really fucking sorry," she slurs, pupils dilated. "I'm from Lethbridge, okay? In Lethbridge we go on the roof all the time and it's not a big fucking deal." The cops hem and haw. One says "you know, hon, we've got somewhere you can sleep it off." "No!" she shouts. "I'm not going to the fucking drunk tank!"

After much discussion, the cops send the girl off in a cab. The manager is incensed. "What about criminal trespass? Reckless endangerment? Narcotics! Assault! What if she jumps in front of a car?" The cops shrug and say goodnight. "Are you kidding," one of the guys mutters, "If I pulled that shit, they'd throw me down the stairs." I'm inclined to agree.

"It's cause she's cute," someone says. We all stroke our chins and rhubarb in agreement. It's like Galileo talking to a roomful of Renaissance sages. "You see? The earth is round!" Mystery solved.

Let's go back to the island. At first, everyone seems to be reasonably invested in the experiment. But as the villagers drink, they operate more and more out of self-interest. Primitive appetites override social conditioning. If resources (especially mates) become scarce, war may break out. In my observation, famine and sickness tend to become factors around midnight.

As the party begins to collapse on itself, people begin clawing for some kind of competitive advantage. That's when they start misbehaving in earnest. The cruel fact is, not everyone has an equal chance of getting away with it.

Here's the lesson from this model society: if you're wealthy, connected, or sufficiently attractive, the rules don't really apply. You are clear to break the social contract with impunity: degrade collective well-being, endanger your neighbours, or, in secret bouncer code, "act like an asshole." The consequences will be minor.

Hey, I didn't invent the rules. I just enforce them. Most of the time.

What concerns me is the large percentage of people who are not special, yet want nothing to do with laws or lineups. It's almost as if they've been conditioned to glorify their betters -- like something is telling them they're going to beat the odds.

The problem is, the math is inflexible. We can't all be VIPs. Even in the little world of the club, the existence of every one per center, by definition, requires 99 suckers.

So let me ask again. Why do you believe you're special?