Pardon me while I venerate. 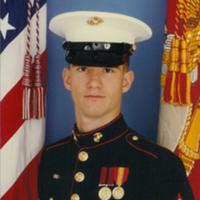 My friend Jon Turk is retiring. There will be no office party, no gold watch, no long, slow drive to a nursing home to eat mushed carrots and wait for his children to ignore him. I don't think Jon would recognize an office if it punched him in the face. I don't think he'd set foot in a nursing home unless he was booked to wrestle grizzlies to slow, oxygen-tank-fueled applause.

Jon is my personal Paul Bunyan. This summer, at age 65, he and his 26-year-old teammate Erik Boomer became the first to circumnavigate Ellesmere Island, a 2,400 km expedition so treacherous it had never been attempted. They walked, they skied, they kayaked. They spent 17 days trapped by churning ice floes. They repelled a 3,000-pound walrus with a paddle. They screamed a polar bear out of their tent -- "The right tone could communicate, 'You're bad. We're just as bad,' " Jon told National Geographic, which has nominated the duo for Adventurers of the Year.

One of many they battled or dodged on the trip, the bear saw Jon as a wrinkled piece of human jerky, unaware he was facing a man who had biked the Gobi desert; who pioneered big-wall ascents on Baffin Island; who kayaked around Cape Horn; who holds first-ascent honours in China, Kyrgyzstan, Kamchatka and Bolivia; who, in 2000, at an age when most guys are looking for tax deductions and worrying about their prostates, spent two years paddling from Japan to Alaska, retracing the steps of Stone Age mariners in what has been named one of the ten greatest sea kayak expeditions of all time.

Jon did all of this after earning a PhD in organic chemistry and co-authoring the first environmental science textbook in the U.S. He has since lived a dual life as a scientist and a seeker, ever-curious about the myths that give meaning to the numbers, a series of spiritual journeys he chronicles in his books Cold Oceans, In the Wake of the Jomon and The Raven's Gift (descriptions below). When I stand next to Jon, it feels like there are two people in the room, and I am less than one of them. I can picture that bear retreating across the tundra, only a mouthful of tent for his troubles, looking over his shoulder at Jon, who gives his best Clint Eastwood squint and whispers a warning: "Tell the other bears what you saw." 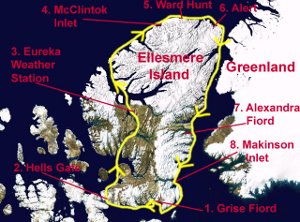 After 104 days, Jon and Erik rounded the island's southern tip where they had started, completing what National Geographic called "The last great unattempted polar expedition." Jon was flown to a hospital, narrowly surviving renal failure. He had announced beforehand that this was his last big adventure, and in honour of his wife Chris, whom he had lost in an avalanche in 2005, he left behind on Ellesmere the skis he was wearing when they got married.

Not a retiring personality

Jon has a rich life to retire to -- hideaways in Fernie and Montana, three children, six grandchildren, a kind and genuine new love named Nina and many friends, like me, who stand in awe of his accomplishments, no less than his warmth, wisdom and unassailable youth. While his adventuring is far from over -- he's already planning a trip to Tibet -- he acknowledges the Ellesmere route was his last major expedition, and like an old soldier or retiring sports hero, he must be struggling to reconcile that his major feats are behind him.

I write this to assure him that they are not. When I met Jon in 2007 at the Banff Literary Journalism Program, we were both working on painful memoirs, and in him I found a real-life hero who had faced greater challenges than mine and emerged with a wisdom and humility I am only beginning to grasp. Reading his stories helped me to understand my own.

No matter our adventure, whether scaling the unscalable or navigating the ice floes of our own tortured psyche, the real feat is finding wisdom in the challenge -- both in victory and in defeat -- and to share those hard-won lessons with the next generation of lost souls. Jon, a gifted writer and a giant of a man, will shape the lives of future explorers in ways he'll never know. In his retirement -- if you can call it that -- I wish him calm seas and friendly carnivores.

Below is a guide to Jon's books, taken from his website.

"An evocative and mesmerizing page-turner, Cold Oceans is the thrilling story of Jon Turk's expeditions to some of the most inhospitable regions on earth. Even after being shipwrecked off Cape Horn, stopped by ice in the Northwest Passage and beaten back by Arctic blizzards, Turk has continued to follow an irresistible urge to explore." 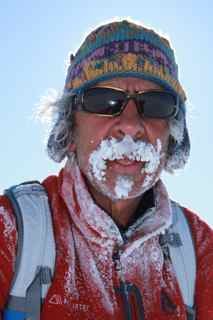 Icy expression: Jon Turk in May on Ellesmere expedition.

In the Wake of the Jomon: Stone Age Mariners and a Voyage Across the Pacific, 2005, International Marine/McGraw Hill.

"In 1999 and 2000, adventurer Jon Turk and partners sailed a small trimaran and paddled a sea kayak from Japan to Alaska. Paddler Magazine called this voyage: One of the 10 All-Time Greatest Sea Kayak Expeditions. In the Wake of the Jomon tells the story of the modern expedition and looks backward in awe at Stone Age mariners who paddled these waters over 10,000 years ago. The book asks, Why did people with primitive stone tools leave their homes in the lush temperate bamboo forests, with salmon in the rivers, seals in the bays and deer in the forests to paddle into the frozen Arctic during the Ice Age?"

The Raven's Gift: A Scientist, A Shaman, and Their Remarkable Journey Through the Siberian Wilderness, 2010, St. Martin's Press.

"In 2000, in the remote Siberian village of Vyvenka, I met an elderly woman named Moolynaut, a Koryak shaman, and learned about her voyages to the spirit world. A year later, Moolynaut entreated the spirit of a great, black raven to help mend my pelvis, which had been previously fractured in a mountaineering accident. When the healing was complete, I was able to walk without pain. As a scientist, I could find no rational explanation for the healing, and the experience changed my life, irrevocably altering my view of the connectivity between the natural and spiritual worlds. Searching for the Raven Spirit, I traversed the frozen tundra where Moolynaut was born, camping with bands of reindeer herders, and recording stories of their lives and spirituality."