Though it is a muggy late-spring day in Edmonton, it is comfortable inside the conference room of the Mayfield Inn. Along with a group of other education geeks, I am seated around a table strewn with the usual continental breakfast detritus -- empty coffee cups on saucers along with small plates with balled-up muffin wrappers, strawberry stems and melon rinds. What is unusual, however, is the half-dozen or so smartphones resting on the table. No one is texting, reading Twitter feeds, or checking on their stock prices. Instead, we are hanging on every word from the man at the podium, Stephen Downes of the National Research Council Canada. 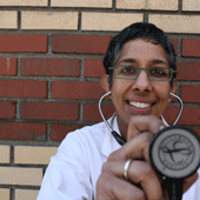 Now You Can Read What Doctors See

With his David Crosby-style flowing grey locks, Downes does not look like the other presenters at Moodle Moot 2011, a gathering of educators, united in their embrace of open-source software. His message is as radical as his appearance. "Control of the network must belong to its members," he tells us. "Open courses, open teaching -- this is dangerous."

I became interested in using open source software for the same reason that many do -- no licensing fees. It soon became apparent to me that I should use it with my students for the same reason. If I taught them using Microsoft Office or Adobe Photoshop, they would have to shell out to use these products at home. If, instead, we agreed to use Open Office and GIMP, they could download these programs at home for free. When a newer version appeared, the whole class could upgrade without forking out cash.

At Moodle Moot it begins to dawn on me exactly how subversive these ideas are and I am feeling more like a teacher-ninja by the minute. What Downes and the other speakers are advocating is the right to keep the tools and ideas of our age open and available to all rather than packaged and sold to the few who can afford them. "The more expensive it is to develop educational systems," Downes instructs us, "the greater push there is to commercialize programs."

Open source advocates are not against profit, but as Downes says, "Commercial use should not block access." Herein lies the schism: as long as a B.C. education is a rare commodity, it can fetch a pretty price. Some B.C. school boards have been turning to international students in order to balance their books. Offshore schools are sprouting overnight like mushrooms, mostly in China, offering B.C. dogwood diplomas from the comfort of one's own country, all for a fee, of course. A quick search of Learn Now BC reveals 58 distributed learning schools operating in the province. Many of these are independent schools.

It threatens the status quo when a group of people are working in order to give this away.

Terry Anderson, of Athabasca University, defines open for us: "unobstructed, accessible, in view of all." Open source is driven by the sharing of resources, he tells us. This sharing results in its real strength -- transparency. "Quality scholarship is peer and public reviewed," he tells us. "It is the only ethical model." This gets to the meat of what defines open source here at Moodle Moot. We make education better by opening every aspect of it to scrutiny, by allowing all players to contribute, to share and to join the discussion.

Its essentially collaborative nature is what has propelled educators to the forefront of this movement. Yet he warns us that our rights as educators to collaborate and share is in need of protection. He insists that we should all "be able to go out there and grab what we need for our courses and make it ours."

I am at this conference as an affiliate of the BC Learning Network. We are a group of teachers who have been given access to dozens of distance education courses that we are now vetting, rewriting, augmenting, remixing and passing forward. Globally, we are not at the forefront of what is happening in open source education. I will leave that to the likes of MIT courseware and the Khan Academy, among others. Yet, at the secondary level, we are likely the most interesting project going in B.C.

This past year, in my role as part-time distance education teacher in School District 46 (Sunshine Coast), I was able to offer 11 online courses, made available to me through the BCLN.

What I really like about this arrangement, and this is where the "open" part comes in, is that I can go into the back of each course and modify the course content, and all of its settings, so that I can have my own version that works the way that I want it to.

Later, I can choose to make my modifications available to others who teach the course. This is where the value of peer review becomes clear. If my contributions are integrated into the master course, then I have done a good job. If they are rejected, I should go back and look at what I am doing. This is how open source projects are built. Content is created by the end user, then reviewed for scrutiny by a group of peers.

The BCLN courses run within an open source learning management system, what amounts to a course shell, called Moodle, hence "Moodle Moot." I can customize Moodle to look the way that I like to and to work the way that I need it to. If I were a programmer, like many at the conference, I could create programs to work for my particular context, then make them available to others just as I can presently do with the content. This would not be possible with a commercial product, as the source code would be hidden from view.

Right now, about half of the BCLN courses require a textbook, a vestige of their correspondence school past. As these new courses take shape, being rebuilt by the teachers who are teaching them with feedback from the students taking them, outdated and costly textbooks are being phased out. Eventually, students will be able to access everything that they need -- readings, images, animations, videos, glossaries, discussions and self-quizzes -- from within the course itself.

The goal of the BCLN is to build banks of resources so that teachers can adapt courses for enrichment and for special education. This could also allow students more leeway in pursuing individual interests and more choice over, for example, which novel to read.

The BCLN is available to a handful of districts in the province, through a paid membership. In the spirit of open source, we should make this rich resource available to all teachers and students in the province. Until we get some external funding behind this project the gates will be open only for those who have paid admission.

It isn't too hard to figure out the conflict here. The Ministry of Education appears to be the most obvious source of funds for opening up the BCLN. Yet it is the ministry itself that is encouraging school boards to get creative with finding alternative sources of revenue when funds run short. They are not yet falling over themselves to hand money to people who are essentially giving away their product.

Martin Dougiamas, the young and affable creator of Moodle, would likely agree. With his easy-going Australian twang, he tells the conference-goers how they can use Moodle to give students more power. He mentions that students can contribute to writing online textbooks and course content. He tells us that Moodle has evolved so as to allow students to have a say over how they structure their learning (he even introduces us to the soon-to-come app that will let students hand in assignments and contribute to discussions using their mobile devices). He mentions that high school students are asking him for integration with Facebook and Google Docs.

The stir that Dougiamas gets from the crowd is palpable when he asserts, "What it means to be a school is now up for grabs."

This thought returns to me later in the day when Stephen Downes is again on stage. "Schools create mechanisms so that students can learn for themselves."

Yes, this is thin ice. Teaching does not get anymore dangerous than this.