In 140 characters or less: It was a year of wikileaks and oil spills, Facebook, ebooks and Bieber bios; double rainbows, 3D movies, Angry Birds and angrier voters. 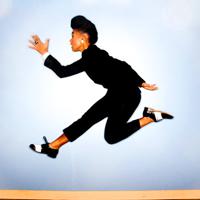 Now tweet, retweet, lather, rinse, repeat, update your status and while we try to find an app that will keep us safe from star whackers and a mash-up from Glee to capture our feelings, break out the inflatable beavers and look back at the tea party that was 2010.

It was a year when Obama was shellacked, Palin was refudiated and dead moose and lame ducks ruled. It was a year of Olympic flames and political flameouts. Charlie Sheen talked dirty, vuvuzela sounds dirty and airport scanners were dirty.

The U.S. government repealed "Don't ask, don't tell" for the military and applied it to their strategy for dealing with oil spills.

American voters failed their midterms as most citizens decided they were too sick of politics to vote. The Tea Party took over, but America will no longer throw tea drinkers out of the army. Best political slogan of 2010. "I am not a witch." Worst political slogan, "I am a Democrat."

The cultural scene was big on recycling as America's hottest new writer was Mark Twain, Betty White was Hollywood's golden girl and Dorothy Hamill's haircut made a comeback -- on Justin Bieber's head.

North Americans stopped poking friends on Facebook long enough to get twitterpated by a movie about Facebook.

Prince William got engaged to a commoner -- which upset just enough monarchists to remind everyone else how absurd the idea of royal blood is in the 21st century.

Parliament was prorogued and Stephen Harper was pro rogue as the ReformaTory Senate voted to freeze Canada's climate bill.

B.C. hosted the summer Olympics in the winter, politicians lost their jobs before getting to lose elections, and Mixed Martial Arts came to Vancouver, but looked like a sissy sport compared to politics in Victoria.

Former actor Randy Quaid fled to Vancouver seeking asylum from "star whackers" who he claimed took out Heath Ledger and David Carradine. A spokes-whacker responded that if they were going to go after someone from National Lampoon's Vacation series it would be Chevy Chase.

After saying the "n word" more times than a gangsta rapper with Tourette's, Dr. Laura decided to retire. She plans to spend her time in her neighbourhood bar ranting about minorities and homosexuals.

In the U.S., the most looked up words of the year were "austerity" and "socialism" -- unfortunately the dictionary was clearly rewritten by FOX news because if anyone truly believes the U.S. health care bill is socialist, it's the U.S. education system that really needs saving.

Hawaii's governor announced that he plans to release proof that Obama was born in Hawaii. Birthers now plan to claim Hawaii isn't really a state.

Meanwhile, polls show that despite their disappointment with Obama a majority of Americans would still elect a black man president -- but only if they can vote for the Old Spice guy.

Stephen Colbert and Jon Stewart rallied to restore sanity, but played coy about which party was crazy.

The stars of Sex and the City reunited for an adventure in Abu Dhabi -- a city where unmarried sex is illegal and Manolo Blahniks are completely impractical. The next sequel is expected to be called Menopause in the Suburbs.

Alice returned to Wonderland -- but this time she was packing heat. Tim Burton announced plans to remake Winnie the Pooh -- with a fully clawed Pooh, a Prozac popping Eeyore and Johnny Depp as Tigger.

Eat, Pray, Love starring Julia Roberts was a big hit, but in order to draw more viewers on DVD it was renamed, The Girl Who Kicked Her Ex-Husband.

Avatar lost the Oscar for "Best Picture" -- apparently due to controversies about historical inaccuracies. Meanwhile, half the cast protested by holding their breath until they turned blue.

In action movie land Sylvester Stallone teamed up with Jason Statham, Jet Li and Dolph Lundgren to beat the crap out of Betty White.

Lost finally closed the hatch door, ending with Jack playing catch with his Dad who asked, "Is this heaven?" And Jack replied, "No, it's Iowa."

24 clocked its last hour, but Jack Bauer may return to torture terrorists in feature films -- or sing on Glee.

Despite a televised address where Premier Campbell announced that every voter would receive a 15 per cent income tax cut, free pizza and a pony, polls showed Campbell was only slightly more popular than monkey pox. However he was still only a few points behind NDP leader Carole James. Following the poll results...

Gordon Campbell resigned as leader and the Liberal faithful begged him not to go, then took to the streets weeping, rended their garments, gnashed their teeth to mourn the loss of a beloved leader who stood for... ummm... winning.

Carole James resigned as leader and the NDP faithful begged her not to go, then took to the streets weeping rended their garments, gnashed their teeth to mourn the loss of a beloved leader who stood for... ummm... $75,000 a year for Moe Sihota.

James confessed that the real reason she resigned as NDP leader was because she heard there might be a job opening at CKNW where boosting the ratings from next to nothing to first place would be considered a success and no one would care if she hung up on Bob Simpson.

Meanwhile, Tyee columnist Bill Tieleman continued his one-man campaign to remind B.C. voters that Basi and Virk is not the name of a vaudeville team that disbanded with the advent of talkies and the freedom of information act.

Open line host Christy Clark left CKNW and immediately became the Liberal front runner -- both because she wasn't a current member of Campbell's cabinet and because she has the support of NDP voters who can't remember the names of any of the leaders who replaced Glen Clark.

One night in November Don Cherry accidentally mentioned hockey on Hockey Night in Canada, completely disappointing our boys in Afghanistan. In keeping with the tone of the hockey-free Don Cherry segments, CBC is renaming Coach's Corner, The Right Winger.

Tommy Larscheid "retired" as the voice of the Vancouver Canucks because he was apparently also supposed to be the voice of Canucks' management.