The mascots frolicked on the verdant lawn of a baseball diamond. 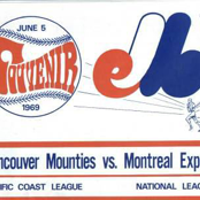 23 Reasons to Miss the Expos

The field was flush with plush.

It was quite the cast of characters.

There was Marty the Marmot from the Victoria Salmon Kings hockey team.

There was Terry Trader from a sporting goods store. He wears a baseball cap backwards and has a missing front tooth and looks like one of the Hanson Brothers if the brothers were seven-feet tall and mute.

There was Rocky the Raccoon from the Shamrocks lacrosse team, who plays air guitar on a goalie stick. He sometimes holds a sign reading, "Chicks dig fur." The flip side reads, "I'm with stupid."

There was Okee, an ice-cream novelty from Okee Dokee.

The gathering of the anthropomorphic menagerie -- and a faux frozen dairy treat -- was held to honour Seamore the Seal, the mascot of the Victoria Seals baseball club.

Seamore wears Seals jersey No. 09, but, like Donald Duck, no pants. (Don't ask.) On this day, instead of a baseball cap, he wore a large red birthday hat topped by a blue tassel.

The seal gave an exaggerated shrug before grabbing his ample belly as if to show he had blubber enough without gorging on more sweets.

It was another busy day for Seamore. He got down on one knee to hug little children, gave grown men the high five, cuddled with a bevy of beauties seeking a little cuddle time.

He signed a cap for 11-year-old Logan Wiersma and he signed the right arm of 12-year-old Brentyn Hill, both visiting from Lake Cowichan.

Seamore gave knuckle bumps, exhorted the crowd to cheer, tussled the hair of 12-year-old Sam Sylven, whose duty it was to shout "Play ball!" to begin the game.

Seamore hugged an umpire. Sometimes, he massages the ump's shoulders, even shines his shoes.

Behind the grandstand, Seamore taught the other mascots the choreography for "YMCA." Giant plushies have difficulty dancing with their floppy feet. Either that, or spelling is not a strength.

Seamore urged his friends to behave after Marty the Marmot tried to shove a giant styrofoam subway sandwich into Okee's non-existent pie hole.

Back among the crowd, the mascot never stopped working the crowd. When the opposing manager disputed a call, he wiped away mock tears with both flippers.

As Seamore passed a hot-dog stand, a wide-eyed little girl clutched her mother's leg, while a 20-something woman bent down to goose his fuzzy posterior.

It's not easy being Seamore.

He has to keep an eye out for orcas and Newfoundland swilers, not to mention the perils of being a pinniped in a land where the Governor General has demonstrated an appetite for seal sushi.

It can be a risky business when a body part is considered a delicacy in some parts of the land.

Seamore was asked how he felt on his big day.

In two summers, Seamore has become a hit with baseball fans, a cuddly, lovable figure whose goofy demeanor helps bring more customers to the ball park.

"If the kids are fans of the mascot," said team president Darren Parker, "the parents have to come, too."

Another Canadian entry in the Golden Baseball League has not had such success in developing a fan-friendly alter-ego.

The mascot of the Calgary Vipers is named Slider, "your everyday, friendly, neighbourhood snake." The baseball pants-wearing ophidian has a forked tongue and a big belly -- it looks like Slider's digesting a shortstop.

Nor is the serpent the only poisonous critter on the circuit. Stinger is the fuzzy green mascot of the Yuma Scorpions.

The Edmonton Capitals' mascot is Razzle, a roadrunner who had been created for a hockey team, only to be abandoned -- or should that be mothballed? -- when the skaters moved to Oklahoma City. The baseball team inherited the unwanted Geococcyx californianus.

Razzle's natural arch-rival works for the Orange County (Calif.) Flyers, whose mascot is a railway engineer named Coal Train who happens to be a coyote.

Tomfoolery is a venerable tradition in baseball, tracing its roots back through such entertainers as Al Schacht, the original Clown Prince of Baseball, and Max Patkin, the successor to the throne. (Schacht pitched three seasons for the Washington Senators at the end of the First World War. He had 14 wins, 10 losses. He began clowning as a coach when he would mimic opposing players. He later owned a popular Manhattan eatery where the menus were round like oversized baseballs. Sometimes he interrupted meals to launch into borscht-belt routines. "There is talk I may be Jewish," he once said, "just because my father is Jewish, my mother is Jewish, I speak Yiddish and once studied to be a rabbi and cantor. Well, that's how rumours get started."

Some barnstorming teams also married diamond skills to crowd-pleasing antics in a less sophisticated age, including Bloomer Girls (with cross-dressing men as ringers) and the House of David (bearded members of a religious colony). Doug Peden of Victoria, who had played basketball for Canada at the 1936 Olympics and later became sports editor for the Victoria Times, grew his whiskers long during a Depression summer to make his living with the free-swinging communards. Other touring troupes included teams of African-American teams billed as the Ethiopian Clowns and the Zulu Cannibal Giants, who wore grass skirts.

The cartoony mascot is a more recent phenomenon, one owing much to the energetic routines of The Famous Chicken (nee the San Diego Chicken, a.k.a. the Laurence Olivier of Mascots), the alter-ego developed by a college student from London, Ont., named Ted Giannoulas.

A visit by the Chicken is becoming an annual highlight of the Vancouver Canadians' season. (Check out this video of Nardwuar the Human Serviette versus the Chicken at Nat Bailey Stadium in a duel of squeaky, frantic, orange-and-yellow-clad characters. Guess which one emceed a Ramones show and once interrupted an Elvis concert.)

It is the conceit of a mascot like Seamore that they never speak and always remain in character. They are never to be seen partially dressed.

While Seamore does all his speaking as a mime, sometimes you can find sitting in the stands at Royal Athletic Park a third-year law student named Alex Pomerant, who has made a study of the semi-aquatic marine mammal with the Looney Tunes antics.

"Seamore's goofy," he said. "He likes to help out and sometimes he likes to cause trouble. But mostly he's cute and friendly."

Pomerant, 25, is the son of lawyers from Toronto. He was in the stands at SkyDome when Joe Carter hit his famous World Series-winning home run in 1993. Moments earlier, Pomerant's father said, "I'll try to get tickets for tomorrow." One summer, Alex attended games in all 30 major-league cities, traveling by Greyhound, a journey that included an unwise Atlanta-to-Denver jaunt.

In high school, he played tight end and safety for the Lawrence Park Panthers. Coincidentally, he wakes up mornings after Seamore performs feeling the same aches and bruises as after a football game.

Three hours in Seamore's $8,000 costume is like working out in a sauna. Seamore drinks four litres of water per game.

He sometimes hangs out in a walk-in beer cooler, where the thermometer reads 20-below Celsius.

His brain is filled with the Criminal Code, yet he has a jester's heart and a vaudevillian's timing. He writes letters to his family signed by Seamore.

After the inaugural season last year, the seal thought himself deserving of a raise.

He sent a letter to the owner. It was signed by Stealmore Deals, the name of the mascot's purported agent.

Unlike many contract negotiations, this one ended swiftly with handshakes all around.

Seamore got a $10 boost to his salary. He now makes the grand sum of $60 per game -- no overtime for extra innings.