"A new approach to treating obesity has been opened up by a discovery about how the body creates brown fat, the cells that burn white fat and turn it into body heat... Dr. Spiegelman has used this system...to see what happens when brown fat cells are implanted into obese mice. Asked if the mice were any thinner, Dr. Spiegelman said the results so far were encouraging." – The Times 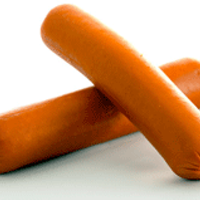 Would You Eat Lab-Grown Meat?

Ugh, I feel sooooo gross, I can barely stand to look at my reflection in the water dish. I must have put on 20 grams since that gouda bender last week -- my ankles are thick as pencils. "Brown fat" my furry fat ass.

Why did I volunteer for these experiments? Damn your "effortless weight loss" promises, Dr. Spiegy! (I know he hates that nickname, but he insists on calling me "Squeakers" when he knows full well my name is Jim).

It will take time, he says. Be patient, he says. Ha! It's easy to be patient when you're a scientist and live like a dozen years. I've already got nine months behind me, and if I'm lucky I have nine more to go. I don't want to spend it waiting for the doc to come in every morning and stick his pinkie up my butt. Okay, that has actually never happened, but I've heard stories.

You know I've never been to Venice? I hear there's a cheese shop near the Rialto that makes a gorgonzola torta to die for. Of course raw-milk cheese is exactly what my thighs don't need. I'm already such a fatty fat fat I would probably crash right through the boardwalk and sink a gondola. I might as well face it -- I'm doomed to a life of Swiss. (It's less fattening if it has holes in it, right?)

Seriously, who am I kidding? This lab is my last hope. I have dick-all will power and haven't taken a turn on the wheel since Spiegy gave me those caffeine injections. (Nice one, Dr. S. -- forty grand in government funding to determine coffee keeps you awake. Well guess what? More wakey means more eaty. Just ask my cankles!)

Still, it's better than growing an ear on my back like they did with Carl. Creeeeepyyyyyyy!!!! I know I shouldn't stare, but...Jesus Christ, that is some sick shit. Sometimes the guys in the next cage (Strain C57BL/6) will be all, "Hey Carl," and then Carl will look at them and they'll be like, "Just wanted to make sure you can hear us!" Not very nice, but you know how cruel C57VL/6-ers can be.

OK ok ok -- no more whining! Time to get your shit together. C'mon Jim, you can do this -- think positive. Remember when Whiskers had his immune system deactivated and then was injected with AIDS, and he was all, "I can beat this, I am a survivor"? I mean, he was totally wrong -- dude didn't last a week -- but hey, A for attitude. Just give yourself a mantra to focus on. Something like, Brown fat is where it's at, brown fat is where it's at. Hey, that's good. That's like, Jenny Craig slogan good. I should pitch that to them. Maybe I could be the Jared of Jenny Craig, except I wouldn't look like a Shar Pei under my cardigan (oh snap!). Seriously, I could be all "Before Brown Fat" and "After Brown Fat." And once I'm famous, I will buy the biggest goddam vat of liquefied triple-cream Camembert you've ever seen and drown myself, all Kurt Cobain-like. And they'll be all, "He couldn't stand the thought of his fat becoming a pawn in the consumer-corporate mechanism." But really, I just seriously love Camembert.