The German word fernweh is a kind of nostalgia for a place that you’ve never been before or one that doesn’t even really exist. It pertains equally well to a past time.

It is this nebulous and yet undeniable feeling that trails you after a visit to A Minaret for the General’s Wife, a new exhibition from Turkish-Canadian artist Erdem Taşdelen at the Richmond Art Gallery. Try and shake it off and it only circles back harder, clutching your leg, refusing to let go.

As the booklet that accompanies the show explains, its 12 individual vignettes are “a constellation of fictionalized narratives that revolve around the story of an Ottoman-style minaret built as an architectural folly in Kėdainiai, Lithuania in 1880.” The origins of the show arrived, rather serendipitously, when Taşdelen came across a photo of the minaret in a Turkish travel blog.

Co-curated by Julia Paoli from Mercer Union and Toleen Touq of the South Asian Visual Arts Centre, the show comes to Richmond after a run in Toronto, where according to the artist it sat on its own, alone, when the pandemic lockdown shuttered all galleries.

This quality of extended solitude, with its attendant mournfulness, sticks to the images and objects in the show, like a clinging film of sadness.

It’s this atmosphere that provides a strange emotional weightiness that goes beyond the artifacts themselves. You can feel it the moment you enter the gallery, an undefinable miasma, like a faded perfume. The past is another country, unknowable in many ways, but with a deeply powerful hold on the present.

In the Richmond Art Gallery, a ladder leaning up against the wall or a denim jacket slung over the back of a folding chair look like they were accidentally left there, while the crew assembling the show took a quick smoke break out back. A clutch of wine bottles in one corner of the gallery could have been left over from a late-night, last-minute bout of organizing. But it’s all meant to be there. In this way, there is a spirit of provocation at play, a trickster quality that makes the entire gallery seem a bit suspect.

In creating the work, Taşdelen roamed around Kėdainiai Town Park in Lithuania for a number of days, filming the surroundings. This footage plays on one of three television sets while the other two TVs sit mute and dark. The only sounds in the film are that of birds and the faint creak of the earth baking in the sun. During his time in the park, there was a heat wave, and the shimmer of hot air gives the film a distinctly physical pull.

This is also where things start to get a little meta. The experience of the show itself, in a gallery far removed from the real place and the real thing, begins to take up territory inside one’s head, with the potent and strangely vivid quality of a waking dream. The details might fade, but the feeling remains, melancholic and strange, lingering on in twilight fashion. It’s crepuscular stuff, part Miss Havisham, and part forgotten guidebook.

It’s a particular flavour best captured in the artist recounting his Kafkaesque struggles to find a certain bit of microfilm in the State Historical archives. It made me think of library stacks, where old books molder with no one to read them. It arrives even more directly in the sepia photographs featured in the show. They’re filled with folk long dead, dressed in fancy party clothes, staring flatly at the camera.

There is something innately unnerving about these images. Maybe it’s the stray thought that enters one’s mind: “All these people are now dead.” The next lingering idea is that one day in the distant future, someone in a gallery might come across a photo of you and think the same thing. 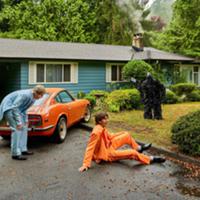 The Strange Pull of Gen-X Nostalgia

It’s the ghosts of things that linger the longest, uneasy spirits that imbue ordinary ephemera — a pair of binoculars, a mouse trap, a pile of sunflower seed shells with something far stranger. So, how does an artistic conceit transform into an emotional one, lodging inside the mind and memories of the viewer, so that they too become implicated? That’s the most alchemical and meaty stuff, and also the most mysterious.

As the final essay in the show’s booklet Phantoms indicates, this play, like a puzzle to be solved, is only the beginning. In the persona of a random visitor to the original run of the show in Toronto, the artist writes:

'A Minaret for the General’s Wife' runs until July 31 at the Richmond Art Gallery.