In what has already been dubbed the Hot Vaxx Summer, there are a few different scenarios at play.

Extra Gum’s viral ad offers up a decidedly sexy and upbeat version, whereas others are more uneasy about the coming transition into a future when COVID-19 has loosened its grip.

Whether we chew gum, jump on random strangers in a park or overthrow dictators, the post-pandemic period (PPP) is bound to involve a few bumps and grinds.

But never fear: The Tyee is here to help smooth the transition with some helpful tips.

First though, a word of caution. Although a single vaccination greatly reduces the risk of getting COVID, especially of getting sick enough to end up in hospital, we still need to exercise care. We’re not quite out of the woods yet. Even if you’ve had one vaccination, you can still get COVID and pass it to other people. Please pay careful attention to health advisories before leaping into your personal version of a Hot Vaxx Summer. Practise safe summer fun!

However you approach it though, here’s some good overriding advice.

Be patient with yourself as you learn to put on human clothes, make chitty-chats with neighbours and go about the world once more. It’s a good time to rethink, rejig, reimagine and revise any number of things, beginning with your own warty self.

First off, clothes. From the feral couch world where blankets wrapped around your midsection constituted formal attire to being a functional fashionable person might take a bit of work. But it can be done.

How to put on foot covers? What are they called again? Shuuuuuuuze? Say it phonetically with me. Yes, you have one for each different leg end, what them called? Feeeeeeeeet. Pull on your giant dress and sally forth, like a ship at full sail. Avast, new world!

Learning to socialize in person with ease and fluidity might take more time. What’s it called again, speaking words of nothingness? Oh yeah… small talk. No more American politics or environmental collapse: you may speak only of gentle topics, like a Jane Austen novel. Discuss the weather or your abilities on the pianoforte.

Get a new haircut. The modified mullet is apparently the hairdo that needs doing. In preparation for Hot Vaxx Summer, people are reportedly waxing everything below their eyebrows, the full meal deal, as it were. If you wish to be bald as a billiard ball, that’s cool. Hairy or nary is always a good place to start.

Try not to obsess too much about fixing every little flaw, straightening your teeth or getting a beach body, whatever the heck that is. Just enjoy the skin you’re in.

Fun is the main objective in the Hot Vaxx Summer. Whether this period rivals the bacchanalia of old — think the Flapper madness of the Roaring '20s, when gin, dancing the Charleston and bobbing one’s hair were de rigueur — inevitably there’s going to be some species of ruckus taking place.

If the U.K. is any indication, a sustained period of overindulgence followed by a nationwide hangover might be in the offing. If you’re young and frisky, get out there and make some interesting choices. If gum ads are anything to go on, it’s going to be a swap-spit kind of summer. You don’t have to go full hoedown, but a little randy action is OK. This is a non-judgy time for certain, so experiment!

For the older, less horndog crowd, Hot Vaxx Summer offers the chance to Costco without fear. Don’t roll your eyes. Freedom from fear is the ultimate luxury. So let’s wallow for a moment like a pig in mud.

Small pleasures and big ones: anything you can partake in without incurring harm to yourself or another is fine. Theatres, concert halls, the movies: any place where people gather might rebound with unbridled ferocity. Dining out, moshing and random makeouts with anyone willing and available will probably be some of the hottest activities in Hot Vaxx Summer.

There are even more esoteric pleasures to be had. After getting one vaccine, get a few more! Shingles, malaria, Dengue fever. Nab a tetanus booster, so that you can run barefoot across golf courses in the honeyed light of a long summer evenings. It would really suck to survive a global pandemic and get snuffed out by stepping on a rusty nail. Boo! Get all the shots you can and celebrate medical science.

As any student of human nature will tell you when society is pulled so far in one direction, it’s going to swoop back when finally released. Pendulums gotta swing, that’s what they do. All the behaviours that humans were forced to adopt in order to be safe might be jettisoned straight into the sun.

But there are a few to retain, like always have a bountiful stock of toilet paper on hand, give people room in a public space and respect the need for time off from the endless march of productivity.

As the long dark tide of COVID slowly begins to recede this summer, leaving us humans deposited once more on dry land, blinking, confused and sporting a few barnacles, it might be a good time to rethink a few other things. Not just with small stuff, but big changes as well:

Renewable energy for all! Stop cutting down old-growth forests! Don’t listen to narcissistic sociopaths and petty dictators! Hopefully, the era of goatish old men is finally over. Putin, Modi, Bolsonaro, Trump — bin the lot of them!

Bring on the new world, a utopia where everyone wears gauzy hemp outfits and rides horses. Let women with toothy smiles and kindly nature rule. 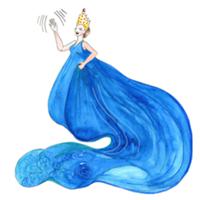 Say Yes to the Giant Dress

The possibility of systemic change has been dangled so many times before — from Occupy Wall Street to the Arab Spring to the Paris climate agreement — that it feels almost frightening to hold out hope for a gentler world. Whether a return to what was once quaintly termed “reality” is even possible remains to be seen. But maybe that’s a good thing. Maybe it’s a good time for rethinking the very nature of reality itself.

As the late, great David Graeber said, “The ultimate hidden truth of the world is that it is something we make and could just as easily make differently.”

Cut your hair into a mullet, shake up your gender identity, tear down the patriarchy and re-emerge in time for the dawning of the age of Intersectional Aquarius.