Finn Slough sits at the intersection of Number 4 and Dyke roads, on the outskirts of Richmond, B.C. The historic fishing village is like something out of a dream, or a different time entirely. Two rows of wooden shacks and houses — some ramshackle, others bright and well-cared for — perch on stilts along a narrow inlet off the mighty Fraser River.

Originally settled in the 1890s by a group of Finnish fishermen who needed access to the Fraser, the village is now home to about 25 residents — artists, tradespeople, teachers and nature lovers — who are fiercely attached to their way of living.

While a small community existing willingly on the periphery of society — without most services, or even a sewage system, part of no official municipality — may seem almost unthinkable in 2021, there was a time when this was not uncommon.

In her book Mudflat Dreaming: Waterfront Battles and the Squatters Who Fought Them in 1970s Vancouver, Jean Walton, a professor of English and film studies at the University of Rhode Island, set out to document and pay loving homage to a similar community.

Walton, a native Californian who moved to B.C. with her family in the early 1970s, resurrects a pivotal era in Vancouver’s urban development — the turbulent period that coincided with the occupation of the North Shore’s infamous Maplewood Mudflats.

The mudflats (now known as the Maplewood Flats Conservation Area) was an area on the intertidal shores of Burrard Inlet that was, for a time, inhabited by a group of squatters drawn by its off-the-grid appeal.

As early as the 1940s, the mudflats had hosted artists, writers and environmentalists keen to escape the hectic pace of Vancouver’s rapidly urbanizing cityscape and live in closer relationship with nature.

British expat Malcolm Lowry, author of the classic novel Under the Volcano, is perhaps their most famous resident. But shortly after his tenancy came a new generation of ‘60s counter-culture seekers who made the mudflats entirely their own.

Part local history, part film and cultural study, part memoir, Mudflat Dreaming is a book unlike any other I’ve read. The text is grounded in Walton’s experience growing up in Surrey’s Whalley neighbourhood in a wooden A-frame behind the motel that her family owned and operated on the King George Highway.

Though Walton was a teenager in the early ‘70s and didn’t visit the mudflats until she was an adult, her fascination with the place took root in another Surrey community: Bridgeview, a working-class waterfront neighbourhood just down the hill from her home.

Bridgeview’s struggle for municipal support and infrastructure, as well as the tenacity and determination of the residents fighting to remain in their homes, moved her even at a young age.

Walton found a parallel between the struggles of the residents of Bridgeview — forgotten or disparaged by Bill Vander Zalm, the anti-welfare mayor of Surrey and later B.C.’s premier, the city council and their neighbours — and the residents of the Maplewood mudflats, who also butted up against a dominant society ready to pave over their paradise with a parking lot.

While she acknowledges the stark differences between these two communities — one a low-income neighbourhood facing lack of access to clean water and a functioning sewage system, and the other a self-selected, largely middle-class bohemian enclave — what Walton is most concerned with is their shared spirit.

While Bridgeview mounted a stubborn campaign to have its basic rights recognized and city amenities provided, the Maplewood flats dwellers fought against persistent attempts at eviction by city officials and developers.

Mudflat Dreaming flows like an oral history, as if Walton had sat her readers down around a campfire and opened up a treasure trove of memories, photos and keepsakes that lead her down all manner of absorbing trails in telling her tale.

She shifts between the Maplewood squatters and Bridgeview residents with analysis of several documentaries that captured their respective conditions — two focused on the mudflats, including a National Film Board production called Mudflats Living, and a third NFB participant-driven film about Bridgeview titled Some People Have to Suffer.

Walton unearths a wonderfully rich time capsule of their alternative visions of city living, from the fluid notions of family, community and kinship that the mudflats engendered to the anti-developer sentiment that united Bridgeview’s residents.

While some sections in Mudflat Dreaming veer off into tangential explorations of film history, gender studies and studies of the communities’ most memorable characters, the book as a whole is a lovely collection of precious ephemera — almost like the cobbled-together homes of the squatters Walton writes of, filled with care and intention.

Just as Walton experienced elegiac memories while refamiliarizing herself with Maplewood and Bridgeview, I too felt a tinge of melancholy while reading her book.

Walton is too intelligent to suggest a romantic, uncritical notion of pioneer homesteading as a true alternative to our late-capitalist settler-colonial existence. But the book is not without some longing for a world that might once have been.

When Walton writes of the early 1970s in Vancouver as “the era of fierce political battles in the city over whether whole neighbourhoods should be wiped out to make way for brutalist skyscrapers, mammoth shopping centres, and freeways,” I can’t help but feel sadness. In spite of all that has changed since then, too many things haven’t.

Whether it’s Downtown Eastside residents being pushed out of their neighbourhood by developers and city officials; or Vancouver’s artists, young people and working families ready for an eviction notice at any time, fear and loss hang constantly over our city.

In revisiting the mudflats’ and Bridgeview’s respective resistance to the forces of urbanization and industrialization that were engulfing Vancouver, Walton paints a fascinating portrait of community activism and relationship to land that feels all too relevant today.

Vancouver, it seems, has long been plagued by unchecked development, corporate greed and the people who have refused to succumb to it. 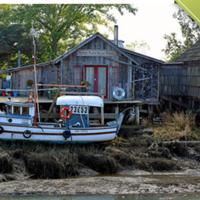 Finn Slough: An Off-Grid Urban Wilderness on the Fraser River

Reading Walton’s book made me think of places like Finn Slough — one of B.C.’s last real squatter communities and one of its few remaining fishing villages — and all that it represents, as urban development claims more and more of the land that surrounds it.

The community has faced its share of struggles, just like the mudflats and Bridgeview once did. Prospecting developers, rising tide levels, land-tenancy issues — they have all left their mark on Finn Slough. But these hardships have brought its residents closer together.

And just like the Maplewood flat dwellers and Bridgeview’s residents once were, the slough’s occupants are determined to remain.

In a culture increasingly obsessed with turning a profit from every last inch of the natural world, tenacity and stubbornness may be their — and our — most valuable resource.