The year in film wasn’t entirely all elderly white men doing bad stuff. Occasionally women showed up and took off their pants.

I kid. Two of the most romping good films came from female directors and largely all-female casts.

Little Women can be summed up in one word, and that word is bloomers! There are also satin ribbons, hoop skirts, velvet snoods, bustles and cameo brooches.

The latest adaptation of Louisa May Alcott’s classic novel is a costume designer’s silky drawers dream come true. All this lusciousness should give you an indication of the nature of this film. It’s real purty. It’s also pedigreed.

Not since the Kardashians mesmerized an entire nation has a sister act so enthralled. There are a few contemporary flourishes, but for the most part the film plays it straight. Sisterly squabbles end in milky explosions of upended petticoats and starchy white bloomers. There are seaside picnics and play-acting shenanigans, all wrapped up with a grosgrain bow and served with a lump of sugar.

There are a few liberties taken with the source materials, but the bones remain the same. As the sisters grow into stalwart young women under the eye of their beloved Marmee (Laura Dern), hard lessons are learned. A mixture of saint and Amazon, Marmee regularly reminds her girls to be generous and good, giving away their Christmas breakfast to the poor folks down the road.

All their actions are watched over by the toothsome boy next door. As Laurie, Timotheé Chalamet’s creamy, dreamy half-lidded stare is shot through with ribbons of indolent desire. Though Chalamet is given a run for his money by another gorgeous onlooker, Louis Garrel (as Friedrich Bhaer). Garrel, it must be stated, is so ridiculously handsome, it’s just not right or proper.

As sweet as pulled taffy, the film might bring on the occasional diabetic coma. It’s also as white as snowy piles of hand-crocheted lace. There don’t seem to be any people of colour in this version of America.

But in amongst the rustle of silk and lace a few flinty bits emerge, principally in the battle of the sexes embodied in the character of Jo. Standing in as Alcott’s avatar, Jo is the blazing star of the family, and Ronan plays her as a headstrong filly, galloping across the countryside with lovestruck Laurie in tow.

In this eighth film adaptation of Little Women some things change, and some remain. But you will always have bloomers.

Of course, if you need a more adult affair, you can’t go wrong with Hustlers.

Everything in this film is supersized: the furs, the jewels, the heels and, of course, J-Lo’s famous backside, which gets a quite-prominent-and-unavoidable star turn via the introduction of Ramona Vega (Jennifer Lopez). She’s a stripper with a heart of gold that matches all her other golden things, like burnished bronze skin, blond highlights and supernova aura, like a miniature sun.

It’s little wonder that a junior dancer, the charmingly named Dorothy/Destiny (Constance Wu) takes one look at Ramona and goes, I’ll have what she’s having. 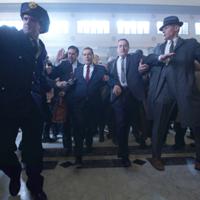 ‘The Irishman’: Old, Waxen-Looking Boys Will Be Boys

Poor Dorothy is having a rough go in the pole-dancing biz, until she is literally taken under Ramona’s wing (actually the warm embrace of her enormous chinchilla fur coat). The early scenes where Dorothy learns the way of the super stripper are loads of fun, spiced up with star turns from Cardi B and Lizzo, who play fellow dancers.

I could’ve cheerfully hung out with all these raunchy funny women for much longer, but the plot kicks in when Dorothy, Ramona and two other women (Mercedes and Annabelle) form a gang and start to make some real money. As Cardi B. infamously sang, “I don’t gotta dance, I make money moves.”

After the crash of 2008, when the dollars aren’t flowing as fast and furiously, the women put their wiles to work, luring stockbrokers into maxing out their corporate credit cards and then sending them back to Wall Street, hosed down and hungover.

It all goes swimmingly for a while. The lady gang is awash in cash and all that it can supply, including fancy purses, SUVs and sky-high shoes. But drama comes a’calling and before long, there’s hair pulling, squabbles and female trouble.