A retired Crown prosecutor, Johnson grew up in a Cree community on Treaty 6 territory in Saskatchewan. He spent the early portion of his life as a trapper on the north end of Montreal Lake in that province, then earned a law degree — and a master's degree from Harvard Law School — and began working as a lawyer.

In Peace and Good Order, Johnson criticizes the entire Canadian justice system. But also owns up to his active participation in it as a Crown prosecutor in northern Saskatchewan.

Johnson isn’t playing the victim. Although he recognizes the systemic racism embedded in the justice system, he calls upon Indigenous communities to revitalize their own systems of justice, without the permission of the government of Canada.

The impetus for the book, he says, partly came from the night an all-white jury acquitted Saskatchewan farmer Gerald Stanley in the killing of 22-year-old Colten Boushie. He argues Canada has little-to-no right to administer justice to Indigenous peoples, referencing the numbered treaties and building an argument around the “peace, order and good government” clause in the Canadian Constitution.

Peace and Good Order builds upon Johnson’s previous bestseller Firewater: How Alcohol is Killing My People (And Yours). The book, which takes a critical look at what alcohol has done to society, was a groundbreaking call to collective action. With this new book, Johnson brings that message to the practice of law and the justice system.

Drawing upon his time as a Crown prosecutor in northern Saskatchewan, where alcoholism and tragedy are often companions, Johnson questions the relationship between deterrence, justice and alcoholism.

Johnson’s clear assessment of the social issues related to Indigenous justice is practical, concise and applicable. Using his lived experience, he takes readers on a journey inside the justice system, where rates of Indigenous incarceration often stagger belief.

Johnson offers a different way of intervening to save the lives of Indigenous youth before they become institutionalized by the penal system. His solution is simple: stop jail culture by taking people into the bush, toward the land, and away from the communities until they can reconnect to their very nature and dignity as human beings.

The Tyee had the opportunity to interview Johnson following the Voices for Change panel at the Vancouver Writers Festival. This interview has been edited for length and clarity.

The Tyee: Can you talk about why you chose to write this book now?

Harold Johnson: The idea began around what happened to Colten Boushie. Another reason is that I had been a Crown prosecutor, and I saw that what I was doing was making the situation worse. I wasn’t helping. The story I was telling myself wasn’t ringing true anymore, so I had to tear apart what I contributed to and do something about it. It’s also because nobody else would.

McClelland & Stewart offered to publish it, and I got to work with a really great editor. The first book I wrote in a month and a half, but that isn’t what M&S wanted. I’d initially written something really abstract. They wanted something more personal and from my own perspective. I liked that. I said, “Yes, I can give you that. I could be honest about my experience and my feelings, and give you that personal story that you're looking for. I’m OK with it.”

Someday I’m going to write that abstract book looking at things from the perspective of story, and how story changes everything.

These concerns have been out there for a while, and I don’t think any book has communicated the issues as clearly as yours. What kind of impact do you predict will come from this?

I can’t see the future, but we have been talking for a long time. I was at a conference last winter when Ovide Mercredi spoke. He said that his first conference was in 1970 on a boat on Lake Winnipeg and the topic was “Indians and the Justice System.”

We’ve been talking about this for 50 years. When I went to study at university, I remember conferences in the 1990s. So, I’ve been personally involved for 30 years.

I’ve come to law conferences and symposiums that talked about Aboriginal people in the justice system, and they were all really good. We had coffee, we were really well fed, speakers would stand up and speak, and we’d keep talking about it. We’d bring in more experts, and we’d keep having these conversations amongst ourselves.

We knew in 1970 there was a problem. And by 1990, Canada recognized there was a problem, so it started to change legislation. We knew that there are too many Aboriginal people in the correctional centres and in the prisons, so we changed the Criminal Code.

Parliament added a section to the Criminal Code telling judges that they had to take into account the unique circumstances of Aboriginal people when sentencing and to use jail as a last resort. But nothing changed.

In 1999, the Supreme Court in R. vs. Gladue tells judges across Canada they have to pay attention to what the legislation says. They spelled it out for them, really clearly — “This is how it works and this is what you are supposed to do.” But nothing changed. The incarceration rates continued to climb.

The Supreme Court came back in 2012 and said, “Hey judges, we told you in Gladue that you have to do this. Now damn well do it!”

The incarceration rates still continue to climb. So, even when they try to make a change, they can’t. They cannot fix this. The machine is too big. They’re not going to fix what’s going on in our communities by tinkering with that system. Any change that is effective has to be fundamental. We have to change some of the fundamental ideas around justice.

We have to get rid of that idea of deterrence. It does not work. All of the evidence shows that deterrence is a failure, and it’s actually making things worse.

In the book, you talk about what you didn’t learn in law school. So what do you say to a first-year law student?

If you don’t have to look at it, then don’t look at it. The judge has to, you don’t. Protect yourself. Vicarious trauma is real. And when you see all of the old lawyers — the ones 20 or 30 years in — they rarely smile. They hardly laugh. When they laugh, it’s dark humour, and they all seem to be suffering from vicarious trauma.

The professional requirement is that you finish law school, so do that. But don’t think that you’ve learned anything in law school because you didn’t. You will have learned a useless skill of how to write law-school exams. You have to learn that to get through it, but it’s a skill you will never use again in your life. 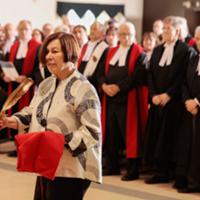 Beyond Gladue: How the Justice System Is Still Failing Indigenous Offenders

You wrote about jail dependency and the culture it creates. Indigenous families suffer because relatives are constantly in and out of jail. What do we do?

We need to take them away from the community. I’d recommend taking them out in the bush, reconnecting them to the land first, because there you get healing. And once you’ve healed them by connecting the human being back to their original state of nature, where they can feel, believe, and experience themselves again, then we can bring them back into society.

In the ’70s, we were really concerned about cults. There were people called deprogrammers, and families would hire these people to go and kidnap their children from cults and deprogram them to get these ideas out of their heads. We need to do that to everybody who comes out of jail. We need to deprogram them from the brainwashing of jail, and everything that they’ve learned in there.

Follow Harold Johnson on Twitter @haroldrjohnson and preview his next book 'Cry Wolf: Inquest into the True Nature of a Predator,' here.