It takes a special kind of personality to get up on stage by yourself and create an entire world for an audience.

Jayson McDonald is one of those rare creatures. The actor/writer spent a decade honing his craft as a solo artist, touring across Canada and establishing himself as a darling of the Fringe circuit.

Now McDonald is bringing his acclaimed one-man show Magic Unicorn Island back to Vancouver to launch the inaugural Hunch Festival of Solo Performances. In its first year the festival is presenting a broad selection of different actors, dancers and iconoclasts, but McDonald’s theatre piece is the first out of the gate.

First performed in 2014, Magic Unicorn Island depicts the creation of a new nation, populated by the world’s children and young adults, in an attempt to create peace.

On the eve of the festival, The Tyee sat down with McDonald to talk about the craziness of performing alone onstage, the art of storytelling and the challenges of the fringe circuit.

The Tyee: Why a solo show?

Jayson McDonald: The short answer is perhaps I don’t work well with groups. I initially started doing them to challenge myself to become a better actor. I felt like I was kind of lagging behind my colleagues to some degree back in the day. And it was a good challenge. It’s nice to get up on stage without a safety net.

What did you learn?

There’s so much of life that we define in terms of what we can’t do. So, when I started doing solo shows and writing for myself and touring on my own, it became more about figuring out what I can do. I don’t know how much I accomplished, frankly, or if I got any better as a performer. But I started to enjoy performing again, because I was losing my taste for that back in the day. It’s kind of come full circle; I don’t really perform anymore. 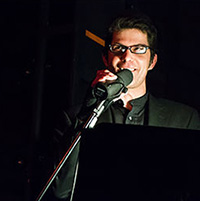 Actor Jayson McDonald: ‘When I started doing solo shows and writing for myself and touring on my own, it became more about figuring out what I can do.’

Do you miss it?

I really do. I miss having the energy and the enthusiasm that I once had. I don’t need to get onstage and just have everybody look at me anymore. There are other people with stories now that I think could use that stage. I’ve told a lot of stories. I’ve said my thing. It’s very interesting to get back up to do Unicorn, which is the most difficult show I’ve ever done.

I wrote this piece because I felt pretty powerless and helpless and I needed to just scream.

The first time I toured it in 2014, every time I would get offstage I would just collapse in the dressing room floor and just burst into tears, because it’s so bleak. I mean, there’s some hope in [it] and there’s a plea for sanity inside of it. But it felt like it was definitely the bleakest thing that I had come up with.

Writing, producing and touring your own work sounds terrifying. Where do you get the courage to do that?

I don’t know. I did it at just the right time. I’ve been touring with various projects and things for years, and I’ve been doing things for years and years before I ever set out on my own. So it was well down the road before I started doing the solo stuff.

It is absolutely terrifying, especially if you’re creating your own work. If it’s a personal thing, you are necessarily very emotionally invested.

What makes a good story?

It’s basically where I’m at in my life at that point. That’s definitely the catalyst for whatever seed comes out. I never sit down to write with a fleshed-out narrative in my head. Unicorn came out of a kind of a dark place where I was feeling really, really small. I had no voice at all, so it was the loudest thing I could write.

You’ve written about a lot of different things (beat poets, invisible robots, among other things). Is there something that ties all these things together?

I’m interested in what makes people tick, what makes people behave the way they do. When I create a protagonist, they’re going to be broken in some way, and they’re looking for a path through their life. They’re not on the right road, you know, they cut through people’s backyards and shit to get through life. I think that’s basically what unites them all, all of these characters employ unorthodox means to endure.

So, endurance in a crazy world through unconventional means?

Sometimes what we see as someone being crazy is someone with their battle gear on, fighting their way up the hill.

Do you use your own work as a way to endure?

If I didn’t have this creative outlet, I don’t know what I would have done. It’s very important to me. Yeah, I guess you’re right, that’s probably what I’m doing. And it makes me a weirdo.

You’re the first performer at the Hunch Festival, are you nervous?

I am extremely nervous. I don’t get up on stage by myself very much these days and I haven’t done the show in a few years, and so yeah, it’s very nerve-wracking. It’s interesting. Hundreds of performances — hundreds — and I still get super shaky nervous. Imagine if you were a pilot and you got nervous every time you had to fly? You’re like “I hope everything goes okay! Is it hot in here? Could you open the cabin door? OK, just need some water. OK, here we go.” That’s me every time.

Solo shows are such a weird thing to do. You’re like, OK, now we all can agree that I’m going to be up here? I’m going to act crazy for about an hour, and then you guys will applaud and then we will all leave. Theatre is like the last kind of town hall where we can get together and have a shared experience and talk about the things that matter to us in our community. It’s like being married for 25 years.