John Green did not believe in sasquatches. 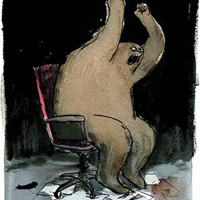 This was the first thing Green told me when I met him in 2009, for an interview at his home in Agassiz, British Columbia. He had a big, uncluttered wooden desk in the corner of his living room, with a map of the Pacific Northwest tacked to the wall beside it. He sat behind the desk and folded his hands in front of him and, before I could ask him a question, told me that people like him were called believers, but they weren't. "We're investigators."

He did a lot of things in his life, but the part of it he spent earnestly and doggedly trying to answer the question of whether sasquatches existed is what makes him particularly remarkable.

In his search for evidence, Green became entwined in a cast of mid-century characters -- millionaire playboys, big game hunters and zealots -- worthy of a Wes Anderson film.

But he wrote the history of the sasquatch as much as he was a part of it. Through his research and writing, he brought the story of the mysterious ape-like creature to the wider world with an air of respect and seriousness. He excavated historic and contemporary accounts from ordinary individuals who'd had mystifying and unsettling, even supernatural experiences in the forests, valleys and coastlines of this wild province.

Bridging the fringe and academia

Green was born in Vancouver in 1927. His father, Howard, was a long-time Conservative MP for Vancouver; his mother Marion was one of the first women to graduate from UBC's agriculture program. After graduating from UBC himself, Green got a master's in journalism from Columbia, took a post with the Globe and Mail, did a stint in the Navy, and eventually settled in Agassiz with his wife June, where he ran the Agassiz-Harrison Advance newspaper.

Green was vaguely familiar with the sasquatch growing up, but it was at home in Agassiz, around 1957, that Green heard a story that sparked his passion.

A woman named Jeannie Chapman, a relative of a friend of his, claimed to have seen a sasquatch on her property near Ruby Creek in the Fraser Valley. It was seven or eight feet tall, she guessed, and covered in dark brown hair except for the face. It came down the hill and advanced towards her cabin; she took a blanket to shield her children, and, in a huddle, they backed away and then ran in the opposite direction.

Green interviewed Chapman along with several men who'd visited the property afterwards and saw huge footprints tracked around the cabin and back up the hill. These weren't the "Indian legends" depicted in the newspapers and tabloids of his youth. These were people Green knew, with serious and detailed stories, who'd all seen the same physical evidence.

In 1968 he published his first book, On the Track of the Sasquatch. It included the Ruby Creek incident and the incredible story of Albert Ostman, who claimed he was carried off by a sasquatch in 1924 while prospecting deep in the coastal forest near Toba Inlet, B.C.

Green continued to research, write and publish many more volumes of sasquatch sightings. And he did get involved with some of the more fringe "bigfoot hunters." In 1959 he participated in the Pacific Northwest Expedition; launched by an eccentric, wealthy Texan named Tom Slick who'd found financial backers (thanks in part to his family's oil connections) to fund a similar trip in the Himalayas to search for the yeti. But this expedition included Slick himself; Peter Byrne, a big game hunter who'd led the yeti hunt; Ivan Sanderson, a writer from New York; Bob Titmus, a Californian taxidermist; John Green; and an acquaintance of Green's, a fellow British Columbian named Rene Dahinden (a cantankerous, obsessive sasquatch hunter who would later play himself in a Kokanee beer commercial).

It was, by several accounts, highly disorganized. The men put out fried eggs and peanut butter sandwiches to try and lure a sasquatch into camp. "There were all sorts of things to argue about," Green later wrote of the expedition. "Slick insisted that the thing should be shot, but I think all the rest of us had serious doubts about that. We all had different ideas about how we should be hunting it, and where."

Mostly Green tackled the sasquatch the way he might tackle any other story: he developed sources, interviewed, recorded, transcribed, wrote and prodded officials for comment. In some cases, he asked people with particularly detailed or interesting sasquatch reports to sign affidavits (there is a copy of Albert Ostman's in one of his volumes), or swear before a magistrate that they were telling the truth, the whole truth and nothing but the truth.

Green also established a positive relationship with academia. He convinced the Royal British Columbia Museum to send an anthropologist, Don Abbott, to travel to Willow Creek, California in 1967*, where prints had been showing up overnight, with regularity, on a fresh logging access road in the redwood forests nearby. (Together, they got the chance to examine the prints: they were 38 centimetres long. The museum still has the original cast; Green had a copy in a slim cabinet beside his desk.) Green even showed me a letter written to him from Clifford Carl, then-director of the museum, thanking Green for his work. "In the meantime, we owe a great deal of debt to Mr. John Green who has devoted a large proportion of his time and resource to the task of assembling every bit of evidence available concerning this fantastic possibility."

Alex Solunac, a media analyst based in Victoria who has followed sasquatch research since he was six years old (when his mother bought him a copy of On the Track of the Sasquatch), says Green is the person who inspired him and many other contemporary sasquatch investigators, like Jeff Meldrum and John Bindernagel. "When [Green] started researching there weren't a lot of books out there, and not a lot of people doing research," Solunac told me.

What made Green unique, says Solunac, was his methodical approach. He investigated stories in the here and now, but also scanned microfiche for old newspaper articles that seemed suspicious. In 1904, for instance, the Colonist published a story about a "wild man" spotted by four men from Qualicum Beach, whom they described as young, with "a profusion of hair all over the body" and who "ran like a deer through the seemingly impenetrable tangle of undergrowth." In the Province, in 1907, the wild man appears again in a story that quotes officers of the steamer Capilano. They describe hearing stories of a "monkey covered with long hair" seen digging up clams on the beach near Bishop's Cove.

Green "started building the evidence that this was not just a phenomenon that started with the advent of film cameras," said Solunac (referring to the famous film of an alleged sasquatch in northern California). "He looked at it through the eyes of a reporter. He always used to say, give me the facts, I'll give you a story."

Even Green eventually grew tired of hearing stories. Throughout the 1970s and '80s, as he became known as an expert and a source on the subject and appeared on the news or in the paper, letters would inevitably trickle in from people with their own tales. The tone of these letters, Green told me, was shock. "They want somebody who appreciates the seriousness of it... you tried to be that for them. But after a while, it gets wearing." He also expressed frustration that scientists had never taken the issue more seriously. He seemed to have expected, or at least hoped, that science would have this thing licked by now.

Five years before Green's death, in 2011, Solunac, his wife Leslie and a sasquatch enthusiast named Tom Yamarone organized the "Sasquatch Summit: A Tribute to John Green" in Harrison Hot Springs. The conference drew more than 300 people, some from as far away as Russia and England, says Solunac. The best-known researchers today gave their accolades to Green, known in the community as "Mr. Sasquatch" as his large family looked on. Teenagers from the nearby Sts'ailes band danced a traditional sasquatch dance. Yamarone performed an original song, "The Ballad of John Green." 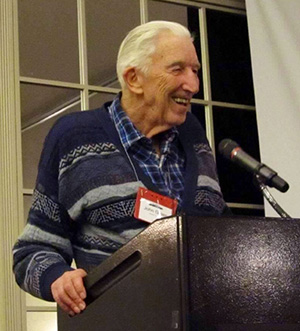 It's not unusual, says Solunac, for some people in the sasquatch community to become consumed by the idea of finding a sasquatch. Green, he says, was always level-headed, and a true gentleman to boot. "He and his wife June were very, very kind people," said Solunac. "He always had an open door for other researchers."

"John's influence permeates every aspect of the search for evidence of these creatures," wrote Yamarone in an email. "His generosity with his time and information were extraordinary. [The summit] was a most fitting tribute to a singular, positive influence on us all."

One of the last questions I asked Green was how he felt about never seeing a sasquatch for himself. The prospect seemed to him to be a double-edged sword. If he said he saw one, he told me, he figured he would cease to be credible at all to the outside world. But he lamented the fact that "so many of my friends have died without this being resolved."

"There's every prospect that's going to happen to me," Green told me.

It's true that the sasquatch mystery remains unresolved. But the legend of John Green lives on.