Four years ago, Bob Preston found himself in the same position as millions of Canadians: he desperately wanted to see Prime Minister Stephen Harper turfed from office. 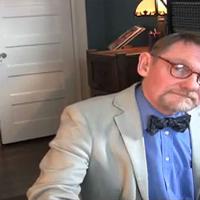 Influenced by Shepard Fairey's iconic "Hope" poster, the Victoria, B.C. artist set to work creating an inspiring work of his own for the 2011 Canadian federal election campaign.

The resulting piece featured the word "Nope" boldly emblazoned over an illustration of Harper. Simple and direct, the work was a tongue-in-cheek call to action, asking us to reject the widely-despised leader at the ballot box.

The artist is also selling limited-edition art prints in case you'd like to hang it on your wall, give it as a gift to your favourite candidate, or slip it under the door of your Conservative MP.

Four years later, Stephen Harper is still in power, and Canadians are once again heading to the polls. With the public desire to end the Conservative party's reign as strong as ever, Preston dusted off his Nope poster, made a few small tweaks, and again made it available for Harper's opponents to share and spread around the country.

As the poster pops up once more on social media feeds, Mississauga lawns and homemade T-shirts, Art Threat caught up with Preston to ask him about the image and what he hopes to achieve this time around.

What inspired you to originally create this work back in 2011?

I have always had a love for posters and have been collecting them since I was in my early teens. Although there is a long history of using posters to promote political candidates, Shepard Fairey's Obama Hope poster resurrected that genre. He did this by creating a beautiful graphic quality and using a very simple message that represented how the public related to the candidate.

I wanted to turn that idea around and use those same qualities against a candidate that I loathe. My intention was absolutely not to make an attack poster -- for example portraying Harper as a vampire, thug or cyborg. My Nope poster in 2011 was very much an ironic take on Fairey's Hope poster but with its own graphic style and obvious humour.

Why have you updated and re-released it in advance of the upcoming election?

We need to do all we can to vote Harper out of office this time.

The Harper Nope image was sitting on the sidelines of the Internet on my website since last election. Then as this year's election got closer I started getting a lot of people finding it online and wanting to use it and that got me inspired to update the image and re-release it.

At one point my website's monthly bandwidth allotment was used up within a two-day period and I had to upgrade it to withstand the traffic. In 2015, the Harper Nope image has little to do with the ironic reference, it seems to resound strongly with people based on the word "Nope," which I think represents a sureness people have that they absolutely don't want Harper re-elected.

They are also willing to go to great lengths -- get their own lawn sign printed up, make T-shirts for the whole family -- to use the image to show people "Nope" to Harper is how they feel. I am getting emails every day from people wanting to use it or just thanking me for it.

That kind of personal reaching out by people and support never happened back in 2011 and is very motivating. I am pleased that I am doing my part for what I believe and I am hoping for a positive outcome this election.

What impact do you hope the work will have?

What role do you believe artists can play in electoral politics?

The people of Canada, artists included, need to become less apathetic. I think Stephen Harper getting elected in the first place is a symbol of what can happen if people don't truly care about what they want for their country or community.

When I think of artists as hardworking, sensitive, creative thinkers, it is easy to see how electoral politics would benefit from their involvement.

How would you assess Stephen Harper's legacy with regards to arts and culture?

The federal budget for arts and culture is so small and the votes lost by cutting it are worth more to him than what is spent on it.

What are you currently working on?

I am working on a street photographers camera (of my own construction) in which I can develop the image (using black and white photo chemicals) on the street while the customer/subject waits.

I'm also working on a series of large colour screen prints of an industrial-era Victoria, of my own creation, circa 1940/50s, using components from archival photographs as source material.