It is easy to come to the conclusion that humans are no good, especially if you spend any time watching Eastern European cinema. 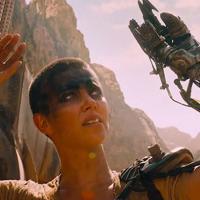 If you would like to add more fuel to the bonfire of your cynicism, you're in luck as Myroslav Slaboshpytskiy's film, The Tribe, begins an extended run at the Cinematheque in Vancouver this week. The film had its premiere at the Cannes Film Festival in 2014, picked up a passel of awards, and has been slouching around the globe ever since.

The narrative takes place in a school for the deaf in an unnamed Ukrainian city. The school, and by extension the city, is a bleak and crumbling place. Every surface is smeared with graffiti, and dirty snow chokes the streets. In the school dorms, the kids bang in and out of dim hallways full of peeling paint and battered doors. Everything looks shabby and worn out. Even the students themselves seem far older than their years.

The biggest and most surprising element is that the story is told with absolutely no dialogue and no subtitles. The cast of characters communicates entirely in Ukrainian sign language. After a wee bit of disorientation that feels somewhat like being submerged in water, you adapt to the film's methodologies. Feelings and intentions are quickly rendered explicit in gestures, facial expressions and movements of the body. The conceit of silence is almost enough to carry the entire film, which is fascinating to watch purely as a piece of physical theatre. The motion of faces, hands, arms and torsos is balletic in some places and in others it resembles an Attila Richard Lukacs painting coming to terrible life.

Our first glimpse of Sergey (Grigoriy Fesenko), the school's newest student, is at a bus stop clutching a bit of paper. With his blank, heavy face and flop of dark hair, he looks pretty much like an ordinary teenage boy. But once he makes his way to the school, he wastes little time figuring out the power dynamic. Within hours he is introduced to the teenage toughs that run the joint. In addition to their academic studies, the kids enjoy a few extracurricular activities, including running a prostitution ring, some ritualized gang violence, and a bit of smuggling and petty thievery.

Sergey is eager to lend his thick young body to the action, and after an initial bit of hazing he is given a few jobs to do. Most involve beating the shit out of unwary citizens and stealing their stuff. The kids hang out on the railway trains or behind the local supermarket, looking for easy marks. It's all grim and sordid but composed and filmed with almost clinical precision. Often the camera trails the kids, padding along behind them like a bullmastiff. This sense of threat is echoed in the physicality of the actors (all of whom were nonprofessional). As the boys stalk about the city, dressed in the urban uniform of black bomber jackets and sneakers, they move as if propelled by a terrible, unending need to do damage. Anyone with a lick of sense would see them coming and get the hell out of the way.

Aside from a few early scenes in the classrooms and administrative offices, the kids are on their own. The only adult presence comes from the school's shop teacher and a sleazy pal of his who would use the kids for their own benefit. As Sergey gets more deeply involved with the activities of his new school chums, he falls under the spell of a young girl named Anya (Yana Novikova). She and her roommate Svetka (Rosa Babiy) are pimped out to local truckers. After their original minder suffers a deadly accident, Sergey volunteers to take the girls on their nightly rounds. It seems he has something of an ulterior motive when he purchases some of Anya's wares. After one of the saddest sex scenes ever committed to cinema, Sergey falls hard for Anya. While she initially seems amenable to his attentions, she has other plans, including illegal migration to Italy.

So, the stage is set for something terrible to happen. Really, there are no other possibilities in a place like this. And herein lies a problem.

Once you are accustomed to the manners and methodology of the film, what remains is the story. And in this one, it's thin gruel. Despite the air of authenticity created by the places and faces, there are no narrative surprises: the moment a scene with the kids making mallets is revealed, you know immediately that someone will be beaten bloody with one of the damn things, and that is, of course, what happens. There is a grim inevitability to the proceedings that feels implacable and often oddly cruel.

With little to establish character other than hunched shoulders and hard faces, empathy -- even sympathy -- is denied. We watch these teenagers murder, rape, and wreak havoc with little more than grim endurance at a certain point. Tenderness gets torn to pieces the moment it raises its green shoots. Love becomes rape, and bloody, savage violence is the only thing left. What are we to take away from it? That humanity is kind of a nightmare? Stay the hell out of Ukraine?

Certainly The Tribe is an impressive achievement. As a piece of cinematic art it is carefully and often exquisitely orchestrated, with a degree of control that is almost oppressive at a certain point. The political allegory of the story, with its nods to government corruption and collusion in Ukraine, is implicit and clear. (Hint: there is a reason none of the school authorities pay any attention to what the kids are up to.) There is something rotten in this former republic of the Soviet Union.

If you would like to see a film that makes The Tribe's petty, thuggish stuff seem like child's play, I would urge you to seek out The Russian Woodpecker. Chad Gracia's documentary premiered at Sundance this past year and is currently on the festival circuit. The story concerns the Chernobyl disaster and the much lesser known story of the Duga, a low-frequency radio tower of staggering proportions constructed right next door to the nuclear reactor. The relationship between the Soviet Union and Ukraine takes on almost unbelievable twists and turns in this film. Really, documentary is always far weirder than any fiction could hope to be. And in the case of Russian history, the beyond bizarre seems de rigueur.

For all of its savagery and bleakness, The Tribe is not that unusual. Films that plumb the depths of poverty, degradation and violence in Eastern Europe aren't new. It is much harder to find films that detail the exact cost of living in a rotten and corrupted place without resorting to mere depictions and reenactments of that corruption. I came upon a film the other day, almost by accident, that did precisely this. Stan Neumann's documentary, Language Does Not Lie, explores how the Nazi regime used and abused language to fashion an entirely alternate world of meaning. (Sometimes I think contemporary real estate agents and developers are busily doing something similar, but I digress.)

The material of Neumann's film is derived from Victor Klemperer's diaries, written from 1933 to 1946. At the time, Klemperer was a professor at the University of Dresden. As he detailed the smallest details of day-to-day life in the Third Reich, he paid particularly close attention to language. Nazi propagandists had a way with words you might say, and as an expert in Romance languages, Klemperer was adept at teasing out the various ways in which words could be robbed of their original meaning, repurposed and perverted to become weapons.

Klemperer's book, The Language of the Third Reich, was the source material for the film, but the convergence of delicate imagery with the author's honest and often morbidly humorous observations (the Nazi were nothing, if not ludicrous in their attention to detail) give the film a profound resonance. It rang in my head like a bell. Most striking is the calmness and dignity with which Klemperer, and by extension Neumann, face ignorance and hatred. Culture is a not only a shield: it is the only thing that endures.

It may seem strange to compare a film that is all about language to one in which not a single word is spoken. But The Tribe, for all its ferocity and brutality, does not come close to producing the same impact as Language Does Not Lie -- perhaps simply because the bludgeoning shock value of heads getting bashed in isn't the same as it once was. I wish that were a joke.