When you tell people you're building an Earthship, there are two stock responses. First there are the believers. These are the people who've watched Garbage Warrior, twice. They want to talk design and permits and timelines. They're into it. The other stock response is an incredulous repeating of the word back to you with a question mark attached. Earthship? 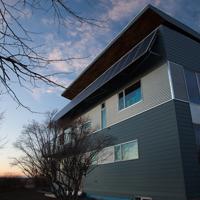 Yes, Earthship. And here's the story of how my family built an Earthship in southern Alberta this summer.

We didn't rush in. After first reading about Earthships in The Geography of Hope by Chris Turner I passed the book along to my dad, Glen. He was intrigued, so we volunteered on a build near Wheatland, Wyoming. It was invaluable seeing one built first-hand and meeting other volunteers and the crew. My dad even volunteered on another build in Hundred Mile House in central B.C. the next year.

A couple years later after everything was in place, my parents went down to Taos, New Mexico to check out a few finished Earthships. Suitably convinced, they came back with plans for a three-bedroom, two-bathroom Global Model with a couple of modifications.

Michael Reynolds is the father of the Earthship movement. A draft dodger from Ohio, he ended up in Taos, New Mexico -- a neo-hippy outpost on the high desert plain that's ringed by mountains.

An architect by training and rabble-rouser by nature, he was dissatisfied with standard home design and started building radically sustainable houses out on the mesa using garbage. Before recycling was a thing he was using bottles, cans and tires alongside natural and conventional building materials.

Building off-grid, self-sufficient homes out of garbage did not, at first, appeal to the Glen Kinneys of the world. My dad has worked in oil and gas for 35 years. But for the past 20 years, Reynolds has been perfecting the Earthship. And while it might sound a little wacky it has four walls, a roof, flush toilets and satellite TV, just like any other North American home.

ASSEMBLE AN EARTHSHIP IN FIVE MINUTES

If you want to see a visualization of what an Earthship like ours looks like piece by piece as it's constructed, this Sketchup time-lapse lays it all out.


An Earthship is a long, skinny bungalow with an earth berm enveloping the back and sides and a greenhouse on the front. The back and side retaining walls are made of tires sledgehammered full of dirt. These tires become a 200-pound steel belt encased brick. Non-load-bearing interior walls are made of aluminum cans sandwiched into a honeycomb matrix of concrete. But it's not just the recycled materials that make it an Earthship; it's the whole package. 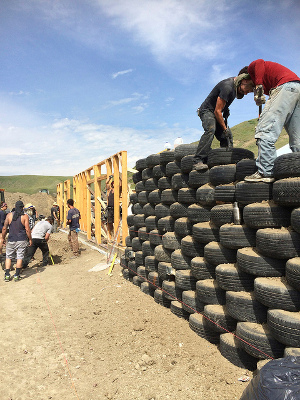 Workers finish off the tire wall on the east wing wall of the Kinney Earthship. The footing has been poured and it's starting to be framed. Photo: Duncan Kinney, Green Energy Futures.

It generates electricity on-site with solar panels and batteries. Drinking water is caught by the metal roof and collected in four cisterns capable of storing 5,800 gallons of water. That water is treated and filtered down to five microns to make it ready to drink. Greywater from the showers and bathroom sinks is used to water a planter in the greenhouse that is already producing a bumper crop of tomatoes.

That greywater is pumped back into the house and used to flush the toilets. Simple earth tubes and ceiling vents in the greenhouse keep the house cool in the summer. Passive solar design, thermal mass, lots of insulation and southern Alberta's glorious bounty of sunlight keep the house warm in the winter.

While we plan on installing a wood stove, Earthships maintain a consistent livable temperature through the winter by maximizing passive solar gain and incorporating a tremendous amount of thermal mass into the building.

We hired the Earthship crew, and Michael Reynolds himself, from New Mexico to come build the house. With them came another 30 to 35 volunteers who camped on-site. It was an amazing experience. Eight hundred tires were pounded and stacked by the end of the fourth day. Pounding tires isn't the easiest job, but it sure is easier with a giant crew.

Around 12,000 cans were used throughout the build for interior walls, for the bond beam that sits on top of the tires and to help fill in and pack out the tires to get them to a level surface.

In five weeks we had almost an entire house. The roof was on, the walls constructed, and the systems worked. Then it came down to the detail work, the sanding, staining and painting. They moved in this winter.

Media interest was through the roof. The CBC, CTV, Radio-Canada, the Calgary Herald, and the Lethbridge Herald all did stories. Roughly 600 people packed themselves onto our property for an open house asking questions and gawking at the systems.

What began as a radical alternative in the New Mexico desert 30 years ago has evolved into an inspiring and surprisingly simple home. And the lessons learned from Earthships can be seen today in increasingly popular net-zero homes.

People want greener, cleaner, more energy efficient housing and they're educating themselves about it. Whether you end up redoing the insulation on your existing home or building an Earthship, it all counts.

ASSEMBLE AN EARTHSHIP IN FIVE MINUTES

If you want to see a visualization of what an Earthship like ours looks like piece by piece as it's constructed, this Sketchup time-lapse lays it all out.