It's not easy being a young music-lover in Vancouver. 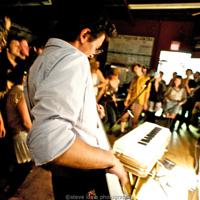 Fight for Teens' Right to Party in Vancouver

For years the city has struggled with a lack of all-ages venues. In 2012, The Tyee listed five reasons why anyone under 19 is going to have a hard time playing and enjoying live music in Vancouver -- but there was optimism on the horizon.

Things have not gotten better.

Over a year later, B.C. liquor laws would change and make it even harder for the all-ages scene. With the express purpose of squashing underage drinking at concerts and clubs, the option for liquor-primary establishments to de-license for the night to host an all-ages event was revoked. Minors are more than welcome in these establishments before "licensed hours of operation," but concerts don't typically happen at three in the afternoon, in a nightclub.

However, there is a group that has been providing safe spaces for youth to experience music since 2009, and that's the Safe Amplification Site Society. Also known as Safe Amp, the group regularly puts on shows that are played and attended by people of all ages. But Safe Amp's commitment to accessible music remains in jeopardy.

Safe Amp is run entirely by volunteers, has no permanent location, and their current spot, Astorino's, is a rental slated for demolition. They subsist on a few grants, donations and revenue from events where tickets go for anywhere from pay-what-you-can to $10. "It's a fairly shoe-string budget; we barely break even," said Safe Amp director Mark Pickersgill, "but that's hopefully something we're going to change."

That change is funding from Vancouver's capital plan. After a successful letter writing campaign this past August, an amendment was added to the Community Facilities section including "consideration of an all-ages live music facility." While Safe Amp is optimistic about this news, there is still the possibility that the non-profit won't see any financial assistance for some time.

Ryan McCormick, another Safe Amp director, knows of the capital plan's uncertainty. McCormick recently attended a meeting where he listened to the struggles the Marpole-Oakridge Community Centre faced in accessing renewal funding that was allocated in the last capital plan. "That kind of made our ears perk up a little bit," said McCormick, "even if we get this, it doesn't mean we're actually getting this."