[Editor's note: Envy the life of Ian McAllister. Beyond possessing great talent as a photographer, he's made his home in the wildest, fiercest, most beautiful landscape in all the province: the Great Bear Rainforest. Now, a new book opens his remote and mist-cloaked world to the rest of us. Below, an excerpt from a day spent watching hungry bears luxuriate in salmon season.]

Only a week ago, the chatter of wrens, the rhapsodic thrushes, and the soft splash of a salmon tail were the ambient signatures of this rainforest alcove. Everything now is replaced by water -- lots of water. A torrent falls from the sky, rushing across beds of moss as the river spills over and through the forest understory. Nothing escapes saturation. 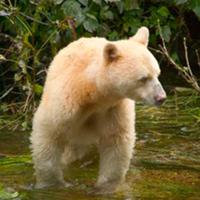 Why Such Secrecy About Great Bear Carbon Offsets?

Record-breaking rain hammers the coast. It is the end of September and already we have endured four separate storm events, characterized by winds exceeding 60 knots. Long-time mariners tell me they have recorded the strongest winds on their boats’ anemometers in over 50 years. This kind of weather makes hard work for everyone, whether you’re a bear fishing for salmon or a captain trying to keep your boat and crew safe.

The canyon has filled with spray and mist. The bears below are having a tough time keeping track of one another; normally scent is their navigation tool, but the pouring rains, unpredictable gusts, and loud rushing sound put them at a disadvantage. These bears couldn’t even hear a shotgun blast from across the river. This is an old and well-established fishing spot, and for some of these bears, many of the most important days of their lives have been spent here.

Coming here feels like traveling back in time; all thoughts of oil pipelines and tankers that increasingly consume the coastal conversation these days seem distant. The fresh smell of salmon, blood, and ripped flesh comes in chaotic waves with the mist, but I choose to stay higher up. The chance of disturbing a bear in the close confines of the canyon bottom is too great, so I wait above on the cliff's edge.

Like the many carnivores around me I also feel sensory deprivation. The noise makes me feel like I’m underwater -- there would be no warning of an animal’s sudden appearance beside me.

When salmon return in strong numbers like this, it has a calming effect on coastal inhabitants, human and non-human alike. A level of accommodation is being displayed between everyone in the canyon that normally would not be observed during other seasons. But the uncertainty of who, and what, is in the canyon, mixed in with my scent, creates a charged environment. There are only so many good fishing spots in these fast-moving island creeks, where bears, wolves, salmon, and a host of others are forced to meet.

Today is a day to be patient. If you are going to see things here you often have to wait quietly for quite a while and let things unfold in their own time. When I first arrived I didn’t actually see any animals. But that’s normal, and I suppose a bit like being in a seemingly empty neighbourhood in an unfamiliar city. Minutes might go by in which nothing happens. If you leave, you might report that the place is void of life. But if you wait, a door might open, and people and their routines will soon become visible.

But bear signs are everywhere: The trees are worn, varnished from hundreds of generations of bears sliding up and down as their mothers fish for salmon, a kind of arboreal ursine daycare. Down below, the occasional coho has a deep red mark on its back, a badge of honour for having escaped a whale, bear, wolf, seal, or net, though there are many more mouths to avoid before this spawn has played out. The fish move through the river with heroic purpose, but the bears feel the anxiety of never knowing how large the salmon run will be and how long it will last. Bears furrow their brows like humans do when they are concerned.

Soon a bear comes out of a corner of the rapids, grabs a fish, and is replaced by another. Looking down through the occasional breaks in the spray and mist, I can see hundreds of black salmon heads and tails rising occasionally above the swirling foam. Large house-sized boulders fill the tight gorge, forcing salmon to swim through fast-moving tunnels below. It is a coho salmon bottleneck. A fishing derby is not far off.

Downriver, the early run of pinks is mostly spawned out, and I see a small bear stand up on its hind legs to access some crabapples. The sharp tartness must be a nice respite from the decaying corpses floating downriver. When I passed those swimming carcasses earlier in the day some of them were moving and technically were alive, but their souls appeared to have since departed, their bodies unable to shut down after such a constant journey.

I first came to this spot over 20 years ago and have not missed a salmon season yet. Even by Great Bear Rainforest standards this place is remote, hidden among a sea of unbroken rainforest, wild creeks, islands, and mist-cloaked fjords. Down at the end of the main creekside bear trail, near the ocean, the entrance to this particular watershed is deceiving. It appears to be just like any one of the countless creeks emerging from the rainforest edge, but there is nothing typical or usual about this place. Being one of the few strong salmon runs for many kilometres, this river attracts a disproportionate amount of wildlife that come for the salmon, or predators that come for the salmon eaters.

Last year, Karen and I brought our children here for the first time. It was a rich day, watching our small ones scampering about under such large and ancient trees, hearing their chatter and laughter as the ravens bounced along curiously above. I suspect that it had been many generations of ravens since the sound of young children’s laughter had been heard so near the headwaters of this valley.

To get here involves bypassing a lower canyon by crossing over a saddle on the adjacent ridge that dissects the valley; then dropping back down to the river’s edge and skirting two lakes, a stretch of open bog forest, and beaver-engineered wetlands; then scrambling up a steep, well-worn wolf/bear trail. The kids moved effortlessly. 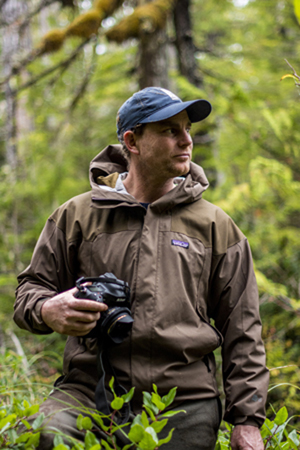 A friend from Bella Bella, Larry Jorgenson, wrote that the only thing more beautiful than experiencing such rainforest paradise personally is to witness it through the glint and marvel of a child’s eye. I understood what he meant on that day.

Bears offer as many personalities as I can find in my neighbourhood, and on Denny Island, where I live, that is saying something. Back here in the canyon, size and even gender do not necessarily determine who dominates the fishing spot below me. A large male sitting on the rocky outcropping waiting for the next salmon to launch itself at first seemed to go uncontested. But then late in the day I see a female with cubs of the year in tow heading purposefully along the rainforest trail toward the fishing hole.

She appears on the edge, looking down for a moment. Without hesitation she and her little cubs walk straight down the rock slab. This might end up in a row. But the big old bear glances furtively at the water hole below, hoping for one last chance at a salmon, then realizing he isn’t going to get it, bounds off, leaving the strategic podium to the mother. This bear is small and shaggy, like a cinnamon-coloured wooly mammoth. She is a no-nonsense-looking bear with pudgy bowlegs and a broad face. For six hours not a single other bear, a number of them much larger than she is, comes close to her spot at the podium.

She sits on her hind legs with one arm outstretched on the rock and another held at a right angle ready to grab a fish. Slowly wagging her big round head back and forth, she waits with her arm cocked back like a baseball pitcher in mid-throw.

As the day winds down more bears show up. Across the river about 45 metres up into a grove of thin hemlock trees sit four black bear cubs and one spirit bear cub. The spirit bear has climbed up above its siblings and is rocking the tree back and forth. It looks to me like the little white bear is trying to shake its siblings out of the tree. Farther down the side creek I see more bear cubs up another tree. Again, here are cubs of the year waiting patiently in the safety of a hemlock tree while mother fishes below. The lower canyon is looking more and more like it has been decorated with Christmas trees with white and black bears and baldheaded eagles. In total there are 10 cubs in the trees around the canyon and maybe a couple hundred bald eagles.