Damascus is a very small rural town in central Arkansas. In mid-September, 1980, it came close to vanishing in a nine-megaton nuclear explosion -- not because the Russians had attacked it, but because a U.S. Titan II missile, sitting in its silo near Damascus, suffered minor damage that caused it to explode. 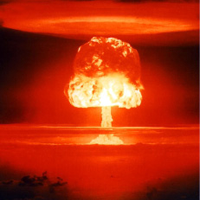 Canada's Nuclear Do or Die

It was not the first such accident, or the last. If even one of those accidents had been a little worse, we would probably not be here to discuss nuclear weapons, or anything else.

Author Eric Schlosser uses the Damascus accident of Sept. 18-19, 1980 as the core of a very important book -- a history of the development of nuclear weapons, and of the military doctrine that considered how and when to use them. It is a very disturbing story.

Those born since 1980 have little idea of how nuclear weapons dominated and shaped the world of their parents and grandparents. I recall a Los Angeles junior high gym class in Jan. 1955 when the teacher, without warning, blew his whistle. Instantly, boys dropped from the ropes they'd been climbing. Everyone hit the floor and curled up. Fresh from Mexico, I copied them. But even then I knew it was a stupid way to try to survive a nuclear bomb.

The 1950s were full of moments like that. At 10 a.m. on the last Friday of each month, air-raid sirens went off all over Los Angeles. My mother's grade-school class in Malibu was terrified one day when an educational radio program they were listening to was interrupted by a Yellow Alert -- a warning that unidentified aircraft were somewhere over Alaska and headed our way.

If we had known what was actually going on in those years, and who was in charge, we would have been even more terrified than we were.

Schlosser tells the story of the Damascus accident with all the suspense of a techno-thriller -- intensified by the fact that this really happened. But he also uses it as the core of a history of American nuclear weapons and the policies that evolved to decide who would use them, and under what conditions.

That history is full of surprises. The first atomic bombs were almost artisanal, even though their parts had been designed with exquisite care. As the Cold War began in the mid-1940s, the whole world was terrified of them. But so many Los Alamos scientists decamped after the war that the U.S. effectively ran out of A-bombs. Not until a new generation was hastily recruited did the U.S. begin to produce more -- and even then it took some time to develop techniques of mass production.

Who can launch a bomb?

Meanwhile, the issues of command and control were debated for years. In theory, only the president could order the use of nuclear weapons. But it was soon realized that the USSR could effectively decapitate the U.S. government with a handful of missiles. Would the president even be alive an hour after they launched, and if so, could he communicate with the military?

The U.S. Air Force made the case that local commanders under such conditions should be free to counterattack; otherwise, the Soviets might be tempted by the chance for a cheap and painless victory. (Ironically, the Soviets didn't share this doctrine; instead they made absolutely sure that none of their weapons could be launched without permission from the Kremlin.)

To a great extent, the Air Force won the debate. But inter-service rivalry meant the Army and Navy also wanted nuclear weapons of their own, and they got them -- including a shoulder-launched "Davy Crocket" missile with a range of about a mile and a half. The hapless infantryman who launched it would likely be among its casualties.

By the time of the Damascus accident, 35 years after Hiroshima, a whole culture and economy had developed around nuclear weapons. They were far deadlier; the Titan II carried a nine-megaton hydrogen bomb, more powerful than all the bombs dropped by all combatants in the Second World War. The missile itself was 103 feet high, housed in a reinforced concrete silo and holding liquid fuels that themselves were highly toxic.

The crews who staffed these silos were young men for whom the Air Force offered an interesting career. The U.S. military is one of the supreme educational institutions in human history, and it trained these young men very well in a complex and dangerous technology. It even taught high-school grads how to disarm nuclear weapons -- teenagers who would not have understood the policy debates that required such skills.

Accidents happen. An accident happened on the night of Sept. 18, 1980, at Launch Complex 374-7: a technician using a socket wrench to unscrew a pressure cap saw the socket (which weighed nine pounds) slip off and fall 70 feet down the silo. It hit the skin of the Titan II, about the thickness of a nickel, and broke it. "A moment later," Schlosser writes, "fuel sprayed from a hole in the missile like water from a garden hose."

Before the night was over, the missile would explode, blasting away the enormous silo cap and launching the nine-megaton warhead hundreds of yards away.

Schlosser points out that this was only one of many "Broken Arrow" incidents in which a nuclear weapon was dropped, lost, burned, or otherwise damaged. The first incident saw an atomic bomb jettisoned over northern British Columbia in 1950. Others occurred in the 1950s and '60s in the U.S., Spain, and Thule Air Force Base in Greenland.

One incident in early 1961 over Greensboro, North Carolina saw a nuclear weapon released from a crashing B-52 bomber. Every safety mechanism failed, except one. If it had detonated, says Schlosser, "that four-megaton bomb in Goldsboro would have deposited lethal fallout over Washington, D.C., Baltimore, Philadelphia, and New York City" -- just three days after John F. Kennedy was sworn in as president.

Nuclear war? Forget about it

International tensions were high in the early 1980s, and the prospect of nuclear war seemed closer than it had since the Cuban missile crisis in 1962. With the sudden crumbling of the Soviet satellites, and then the collapse of the USSR itself, the threat seemed to vanish. Just as countries seem to want to forget a bad epidemic, we were all eager to forget the idea of being vaporized on 15 minutes' notice.

But the bombs are still there, many of them perched on missiles in silos. Young men and women are still being trained in their care, maintenance, and launching. The potential for a self-inflicted disaster is still there, not to mention the chance of an inadvertent war.

Or a deliberately chosen war. The group Physicians for Nuclear Responsibility recently updated its report on the consequences of "a limited, regional nuclear war between India and Pakistan": a billion people dead or starving in south Asia, and another billion in China and southeast Asia facing severe food shortages due to the climate disruption caused by such a war. That, of course, would be a sideshow compared to a serious exchange between the U.S. and Russia or China.

Eric Schlosser reminds us that the threat persists even if we prefer not to think about it. Only by thinking hard about nuclear weapons, and acting to dismantle them, are we likely to reduce the threat.