We walked into a grove of 500 year-old trees, and there it was. 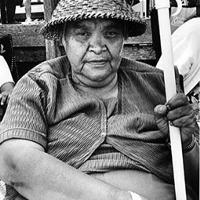 Resurgence of the Canoe Nations

At first glance, it seemed nothing more than an old log covered in moss. Then Jaalen Edenshaw, who had recently carved a canoe with his father and brother in Skidegate, showed us how the ends of the log had been carved to a point, how the base had been shaped into a hull. The abandoned canoe, 35-feet long, would have held 10 people if it had been finished, he said. Probably a boat a for a family to use on food gathering trips.

In that forest, now reached by logging road but not so far from the Yakoun River, one of the key waterways on the islands, we were surrounded by everything once needed to make a canoe. That's when the essence of the classroom resource we were creating, one that featured the canoe as the central icon of Haida culture, really hit home.

Dug-out of a single log, carved into a distinctive shape and steamed open to become a seaworthy vessel, the Haida canoe is connected to the forests, the ocean, supernatural beings, great voyages, war, trade, feasts and potlatches of island archipelago of Haida Gwaii.

But how to connect that culture with the classroom? The Haida Gwaii Museum's recent publication, Gina Waadluxan Tluu: the Everything Canoe, was designed as a resource to do just that, bringing the rich history of Haida culture into school curriculums.

"The canoe is truly a vehicle to gain a deeper understanding of Haida culture and its inseparable links with the islands," writes Haida Gwaii Museum director Nathalie Macfarlane in the introduction to the book.

In researching and editing the book, Kwiaahwah Jones and I spoke with three carvers who, in 2006, were commissioned by the Skidegate Band Council to construct three new Haida canoes, along with a dozen other community knowledge holders. We also pulled information and images from dozens of historical resources.

"The process of researching and compiling the text is a model for how museums can collaborate with their primary communities to bring a fresh perspective to things that might otherwise be considered artifacts of the past," says Macfarlane.

The museum also realized that the book deserved a broader audience than the educators it was originally developed for, and it's now available through the museum's online gift shop.

Here's a taste of the stories we gathered for the The Everything Canoe:

Christian White is an artist and carver in Old Massett. He and his father Morris White, along with other members of their family and community, carved two canoes, one in the mid-1980s and another in the 1990s, events that many credit with deepening their pride in Haida culture.

"Canoes were part of everyday life. From the time (our ancestors) could remember anything to the time they passed away, the canoe was in their life. Everywhere they went was by canoe -- from the winter village to the different gathering grounds to hunt for seal or halibut. And in the springtime they would travel to the rivers to fish for sockeye and plant their potato gardens. They would fish there for a time and leave. Then they would follow the seasons and go to the berry picking grounds. They would return in the fall to their potato patches and fish for sk'uuga, the chum salmon." -- Christian White

Guujaaw, master carver and current Haida Nation president, worked on one of three canoes commissioned by the Skidegate Band Council in 2006 (along with his two sons, Jaalen and Gwaai Edenshaw). Called T'aa, or Small Black Chiton, the canoe now resides at the Haida Heritage Centre. Guujaaw was also instrumental in helping Bill Reid create the initial 24-foot canoe that led to the creation of the Loo Taas.

"We had to basically back engineer to figure out how to build them, starting from existing older canoes that we found in forests and museums. There were only a half dozen or so in museums, but there were some in the forest in different stages. The ones in the forest gave us direction about the order in which a canoe must be built. At the time when we were doing the 24-foot canoe, there was nobody who had built one here, but there were people alive who had seen one built." -- Guujaaw

Herb Jones of Skidegate was a faller for over 40 years and spent six weeks searching the forests for a suitable tree for Bill Reid's canoe Loo Taas. He found one that was 73 metres high and three metres in diameter.

"I must have spent approximately six weeks off and on looking in the forest for the right tree. I finally went to one area, a cedar forest that I hadn't been in for a while and I walked into a gully. As I walked along I could see off in the distance this great big cedar tree standing there. I thought, that's the one I want. The closer I got to it the better it looked. It was a very healthy tree. The limbs, what few limbs that were on it, were very high and to me the tree looked quite healthy, including the bark." -- Herb Jones

"If people didn't have enough berries picked to serve their village, they would have to travel (by canoe) to different areas to pick. The under story can be thick in a lot of areas, so people would have wanted to pick along the coast and not trek inland too far. Many boggy areas -- which are good picking areas -- are quite close to the beach." -- Linda Tollas

The islands' goods were bought and sold by canoe.

"The Haidas were known for bringing their canoes over to the mainland to trade. They would bring new canoes over to trade with the mainland tribes and bring bentwood boxes full of dried halibut, dried seal meat and oil, dried seaweed and even bark from the cedar trees. They would trade that for eulachon grease, mountain goat horns, fur, tallow, leather and other goods we couldn't get here on the islands. It was a big network of trading with the mainland tribes. Even some of the first Europeans that came here -- the first missionaries -- came on canoes from the mainland." -- Christian White

"The story of the canoe is not the story of the evolution of a design, but, in fact it, was shown to our people by a supernatural being. It is important to know that the supernatural world is not in the past, but with us today. The more you come to know about these canoes, the more you realize how amazing the craft is. When you experience the action and the way it handles in the water, then you start to believe it." -- Guujaaw

Jags Brown of Skidegate also worked with Bill Reid on the Loo Taas. He comes from a long line of prominent Haida.

"In the old days, you didn't wear clothes. You put grease on your body mixed with ashes from a fire. So the ashes stop the sun from burning you and the grease sheds the water. Once you were a certain age, seven, eight, you went to live with your uncle and he trained you until you became a warrior. So in wintertime and all year, they took you down to the beach and threw you in the water. You'd come out and he'd throw you back in. Then once he figured you'd had enough, he would let you out then whip you with spruce branches to get the circulation going, then let you run up to the longhouse. That was part of the training, the cold water made you stronger." -- Jags Brown

Captain Gold of Skidegate has done extensive research on Haida history. He found many red cedar archaelogy sites on the islands -- in other words, areas where Haidas stripped bark off trees for cultural uses, made holes in the trunk to test for soundness or used the old ways to cut a tree down.

"This is a very important page of our history and there is very little knowledge of it. Everything we used to do and everything we used to touch was cedar, yet no one understood anything about it. So I started locating sites and identifying them to the logging companies. In some of the old stories the Masset people say that if you follow a Masset canoe song it provides direction on your travel. They say you can leave from here and end up in Japan and come back again." -- Captain Gold

Canoes and the language

Stephen Brown of Old Massett is a fluent speaker of the Massett dialect. He teaches language in the schools and talked with the editors about how the canoe once shaped certain Haida expressions.

"In Old Haida, when they said 'I agree with you,' they said: 'dang tluu ad laaygaa.' The word means 'crew'. So when they are on the boat out there and one is going that way and one is going this way -- maybe they are undecided where the village is... So one might say, 'I'm going to be your crew, get on with you,' which means 'go that way.' Or, 'I agree with that one.'" -- Stephen Brown

The Haida language is not related to any other language in the world. Guujaaw explains the significance of this in relation to canoes.

"You can tie the stories and science to our language. We pretty much have it confirmed that the Hecate Strait was dry and it was tundra-like conditions that our people lived in. When the Ice Age ended and the ice melted, there would have been horrendous movement of water. For a long time there was no cedar. Eventually when there was cedar, it was a long time until there was a canoe with the capacity to bring anyone to the mainland. So people were here, and the fact that the language is an isolate is a pretty good indicator that they did not have the capacity to travel back and forth for a long time." -- Guujaaw

Out on the water

Several journeys have been made by Haida canoe in recent memory, including the return of Loo Taas to Haida Gwaii after Expo 86.

But as Captain Gold explains, the more who get out on the water in the future, the better.

"Making that craft and that skill had to be relearned all over again. And at least once you start making some you are making a starting point. Using the canoe in any kind of weather is a skill that has to be relearned all over again too. And I do hope that a lot more carvers and people learning how to paddle will get out on the water and learn how to work as a team. It's such a skill when you get everybody working together, that canoe just flies." -- Captain Gold