Can we ever truly know or understand our parents? They are often a mystery to us long after we enter adulthood. How and why did our parents come together, what were their greatest passions and disappointments, what was hidden from us when we were children, and what might always remain hidden? 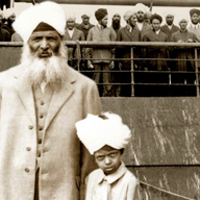 Toronto-based author, Judy Fong Bates has previously published a novel, Midnight at the Dragon Café (which was an American Library Association Notable Book for 2006) and a critically acclaimed short story collection, China Dog and Other Stories. Both books touch upon themes of immigration, isolation, family conflict, and transition, themes that recur very powerfully in Bates' recent book, The Year of Finding Memory.

The opening scene of her memoir occurs just after her father's shocking suicide in 1972 at the age of 80 when the author was only 22 years old. While going through his belongings, she finds a small, dusty cardboard box beneath her father's bed. Among other important documents, it contains his Head Tax certificate from 1914, certifying his payment of the discriminatory $500 fee required from immigrants to Canada of Chinese descent. It was issued prior to the Exclusion Act of 1923, a piece of legislation which stopped virtually all Chinese immigration to Canada until World War II and prevented individuals like her father from sponsoring family to join them.

Those decades of separation from family and community left their mark. Fong Bates describes her father's gruelling life of marginalization and deprivation as he worked long hours for little pay in small towns such as Timmins, Pembroke and Trois Rivières. When Fong Bates and her mother finally managed to leave China to join him in 1955 in Allandale (now Barrie) when the author was only six years old, her mother worked alongside him running a hand laundry, while complaining frequently and vociferously about her plight.

The book contains vivid scenes of the toxic exchanges between her parents. During our recent telephone interview, Fong Bates noted that "it felt so unnecessary, so sad, that those two people could not unite." But Fong Bates did not feel neglected or wronged growing up -- quite the reverse. The book describes her childhood growing up in small town Ontario, feeling supported and encouraged by her parents as she moved between cultures and languages. "In spite of the fact that my parents didn't love each other, they loved me. That's what made me the person I am today, knowing how deeply I was loved. That is where I draw my strength."

The book depicts her father as a cultivated man who sung Chinese opera over the sound of the motor of the washing machine and composed poetry on cut-up sheets of brown wrapping paper, but who was forced into work he found demoralizing and humiliating. Her mother is depicted as an intelligent, determined woman who had the misfortune of being married off at the age of 16 to a gambler and opium addict. She managed to flee Nanking just before the Japanese invaded and marry the author's father, only to find further bitterness and disappointment working in extreme isolation in small towns in Canada, washing people's dirty laundry.

Given the intensity of her parents' bickering throughout her childhood, Fong Bates at first found it impossible to believe they had ever been attracted to each other, believing the marriage had been one of practicality and necessity. But after her mother's death in 2000, the author twice returned with her husband to her ancestral home of Ning Kai Lee in Kaiping County, Guangdong Province and slowly discovered the truth of each of her parents' circumstances, what kept them apart and what led to them eventually coming together through the course of great social turmoil and unrest.

There are wonderfully detailed scenes in the book describing her two journeys back to China -- the startling lushness of the countryside, the exuberant reception the Canadians are given by the Chinese relatives, the feasting, the rituals and customs that had to be followed. Fong Bates notes the stark contrast between the rapidly industrializing, expanding towns and the shrinking countryside, with some villages virtually abandoned. "It's heartbreaking to see the juxtaposition of the country and the city. The ancestral village was like a time capsule, as if nothing had changed for 100 years."

Discussing an early chapter in the book where she describes the custom of bringing flowers and food to her parents' graves annually, I mentioned how her tribute to her parents' struggles is consistent with the Confucian tradition of honouring one's elders. Fong Bates added that "the book merges East and West -- I feel it is honouring my parents in a western way by telling their story."

The western component is the frankness with which she describes her parents' poverty and hardship. "The family in China had no concept of how difficult life was for my parents and my father. It truly broke my heart that all their stories of my father were about the powerful Gold Mountain guest. If they could have seen how he lived in order to send money back to them! There was nothing powerful about him. He ate only rice and fermented black beans for years in order to send money back home. He was a true Confucian man."

I asked if writing this book had changed her view of her mother and father. "Writing this book was a journey of discovery," she stated, noting that her understanding and appreciation of her parents had deepened through the four year writing process. "Yet I also felt they were farther away. They were not the parents I had known and had grown up with and loved. They no longer matched the parents I had grown up with. I came away with a sense of loss as well as gain." And of course there were questions that would remain unanswered about both her parents.

In the end, Fong Bates connects her parents' struggles to those of all parents across the world who came to new lands from far away to toil in obscurity for the sake of their children and future generations. The motivation behind writing it was to bring to light her parents' experience, to render visible the invisible in mainstream Canadian history and literature. Their struggles were and are as relevant, meaningful and significant as those of any political figure such as Trudeau or Mackenzie-King.

"I felt I had a really important story to tell, that if I didn't tell this story, their story would be forgotten."