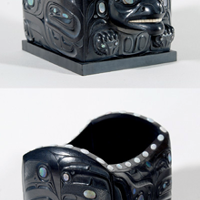 RezErect: All the delicious details

The show honours a cornucopia of artistic mediums from metal masks, to wood carvings, to weaving, the use of animal furs, painting, photography, jewellery, sound and visual media. Hand-crafted seaweed panties, a stone-sculpted penis, a beaver-fur clad bentwood box lined in pink paint and a tightly woven wool weaving depicting a vaginal entrance are all part of the show.

Interactive lectures, roundtable discussions and a feast will also be part of the five-month exhibit.

An online interactive publication of the exhibit, including writings about the art and public reaction to the exhibit, will be available through iTunes in 2014.

RezErect runs from Sept. 25 - Feb. 16. It was made possible by the generous support of the City of Vancouver, British Columbia Arts Council, First Peoples’ Cultural Council and various private donors.

And why shouldn't he get excited? It's not everyday that First Nations artisans from Canada's Northwest Coast get to express such an intimate and important portrait of their lives.

It's not commonplace for First Nations people to have a venue in which to share their sexually and sensually-charged art with the mainstream public through exhibition.

But the RezErect: Native Erotica exhibit, which opens Sept. 25th, erodes stereotypes, crumbles taboos and is giving agency to 27 First Nations artists to explore, examine and expose the healthy aspects of Aboriginal sexuality -- a sexuality that Edenshaw and fellow Haida/Nisga'a artist and exhibit curator, Kwiaahwah Jones, says has always been a facet of First Nations history and culture.

Edenshaw says for much of his art, "The message is that there is already sensuality in the form line and you don't need fat cocks or boobs or anything like that," he says with a laugh.

Edenshaw, who trained under Bill Reid, has submitted five works of art to the show.

His works touch on the issues of voyeurism, nudity, group sex and sexual positions through paintings, installations, pieces carved out of fishing floats and various other mixed media.

Sex that 'isn't all about hurt'

The residual affects of residential school and its negative effect on First Nations sexuality was "a huge incentive to do the show," said Jones, adding that it is fitting that the erotica show will open in the wake of the Truth and Reconciliation Conference that took place in Vancouver last week.

"It's amazing to see the interest grow...among not just non-Native but Native people too," Jones said of the upcoming show.

However, she admits that she was somewhat leery of the potential negative backlash the show could entice for its blatantly sexual vibe.

"That's the scariest part," she said. "But at the same time, it needs to be done."

"Most of the feedback has all been positive," added Edenshaw, even from the community's elders.

"They think it's about time to hear it in the streets -- the dialogue [regarding sexuality] that isn't all about hurt," said Edenshaw. 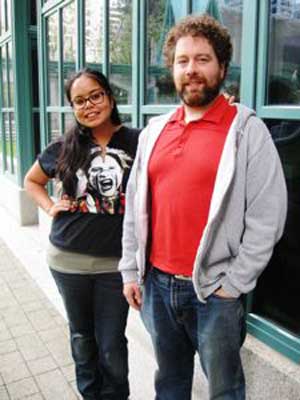 Jones and Edenshaw handpicked artists they felt would exemplify the show, some of which who already had private collections of erotica but wanted to create new works for the public.

Edenshaw insists that erotica has been part of First Nations art all along. Why bring it to the forefront now?

"When we hear about Native sexuality and through how it's fed to us through media, it's within this context of dysfunction and it's always sort of a painful story that we hear associated with it and that's our experience," he said. "But it's not the whole of our experience," he added.

"Native people have full sexual lives outside of all that hard stuff. I think it's good to reinforce those messages."