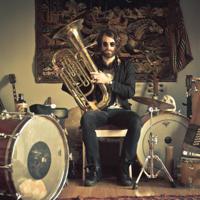 A lot of fantastic words have been spilled in the last few days over m b v, the somewhat delayed new album from My Bloody Valentine. Because this was an epochal event with a very small window for preparation -- 22 years of rumours, madness, writer's block, low comedy, disappointment, false promises, and then a flip announcement greeted with, "Yeah, sure, whatever," followed by an actual fucking record dumped very suddenly onto an official website last Saturday -- the entire critical establishment had to post its reaction overnight.

That was assuming they heard m b v, which was fairly difficult to do absent any music. Because, if you don't know the story yet, the band's server crashed about a split second after they hit send.

Now that matters were fixed, and the chaos has passed -- what of it?

First some context: Kevin Shields is the mercurial genius behind My Bloody Valentine, whose 1991 album Loveless remains an indestructible monolith of dream pop; an object of devotion that has only increased in esteem in the last two decades; an unequalled marriage of brain-melting noise, visionary technique, and heart-quickening melody; and a thing described by Pitchfork as "the perfect album."

Of course, indulgence was the very point of Creation Records -- it wasn't really a label so much as years-long drug party -- so you could hardly blame the obsessive super-nerd Shields for interpreting company policy in the way that he did. Once it arrived, of course, Loveless was so unequivocally amazing that nobody cared about all that. At least until Shields drove MBV's fans to screaming distraction with the subsequent two decades of silence.

Which is over. Incredibly. Unbelievably. And here we are, er, actually listening to m b v, and collectively breathing a sigh of relief that it begins so well, with Shields' spectral voice softly erupting from the first majestic chords of "She Found Now." Between that and the next two tracks, "Only Tomorrow", with its thrilling upward gust of gene-spliced guitar and voice, and "Who Sees You", m b v establishes a comfortable continuum with the past. The latter particularly shares with Loveless and its predecessor, 1988's Isn't Anything, the MBV signature of finding a sweet spot while it wobbles between two separate keys.

If this was all that m b v did, however, it wouldn't be enough. Gradually, we arrive at vocalist Bilinda Butcher wordlessly singing atop the funereal toms-and-organ of "Is This and Yes" (Shields' talent for gravity-free titles persists, at least. I toyed with filing a review that contained nothing but the words "Is not. I are. There be -- 9.5/10," but thought better of it.) The dense, spongy "If I Am" creeps further into unknown territory, but things really take a turn in the last third of m b v.

Which reminds me. In a monograph published on Loveless for the "33 1/3" book series, Shields reveals that massive sleep deprivation, his own possibly extreme sensitivities, and the fact of working in a haunted Welsh studio combined to lend some horrifying encounters to the recording of Isn't Anything.

"I was having experiences like real classic stuff from cheap UFO movies," he said. "… one night I couldn't stay awake but I had to finish the lyrics, and then, while falling asleep, I heard this huge roaring noise. And the room was all bright and I was crawling across the floor, desperately crawling under the desk trying to stay awake long enough to finish these lyrics, while feeling completely surrounded by the presence of things."

Shields later learned that it was company policy to keep clients in the dark about the phantoms and emanations that plagued the remote studio, as well as the nearby military base launching "weird planes all the time." Shields recalls sonic booms and "this constant sense of presence, like it was a mixture of angels and, funnily enough, cow ghosts, ghosts of cows. I don't know why, but I kept having this impression of bloody animals and cows all the time -- really big, weird faces with big brown eyes. But not like aliens."

There's a somnambulant logic to the chord sequences Shields typically employs, and I can confidently persuade myself -- since Shields practiced sleep deprivation well into the recording of Loveless -- that MBV's catalogue is a musical expression of the psychically perilous border state between awake and asleep. The final third of m b v is built on the appearance of intense, cannonading drums that might sound familiar to anyone who's suffered the nauseating experience of sleep paralysis (something I've written about before). It's like nothing else in their catalogue, not counting, if you like, an epically weird story from their formative years.

My Bloody Valentine – "New You."

Or maybe it's me! In his rib-tickling review, the Guardian's Alexis Petridis commented that some of m b v is "so hard to describe it's as if Shields is intent on adding critics to the ever-expanding list of people he has driven to tearful despair." We could just leave it at that. In the end, perhaps the only valid approach to discussing m b v (or anything like it) is with the question: are we disappointed? In which case, my answer is a resounding, "No!" But with cow ghosts.