When Don DeLillo's novels succeed -- as in End Zone, White Noise, or Underworld -- his sentences take the chilled pulse of contemporary civilization. When the novels fail -- The Names, The Body Artist, or Falling Man -- they seem little more than a series of improvised gestures clustered around a hollow core, as if DeLillo himself couldn't discover his own theme. His writing is always rigorously, toweringly structured, but unless that architecture generates meaning the effect is ultimately lifeless -- a hand put to marble. 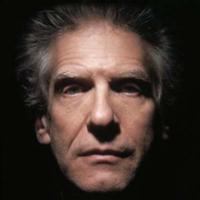 Although in parts inspired, DeLillo's 2003 novel Cosmopolis can be counted among his malfunctions. Fortunately on film, where we're willing to tolerate the absence of robust metaphor for the sake of spectacle and atmosphere, Cosmopolis thrives.

When I learned that David Cronenberg had adapted and directed Cosmopolis with DeLillo's input, it seemed an obvious and even overdue collaboration. Like DeLillo's greatest work, Cronenberg's greatest -- Videodrome, The Fly, or Crash -- combine eroticism and mortality like medieval paintings; they reach down toward the apocalyptic urges always running, like underground rivers, through the constructs of civilization.

Both artists have heartily read Freud, and both are unexpectedly funny.

In Cosmopolis, 28-year-old billionaire Eric Packer (Robert Pattinson) wants a haircut. We follow as he crawls across the traffic-jammed Manhattan cityscape, watching phantasmagoric scenes -- self-immolating protestors, a rapper's funeral -- through the bullet-proof and tinted windows of his white stretch limousine.

Subordinates in Packer's cyber-capital empire, like his sexually carnivorous art buyer, his oracular "chief of theory," and a doctor for his daily prostate check-up, appear at random in the plush backseat to chat, bet billions against the Chinese yuan, or have sex. On the one hand Cosmopolis unfolds in real-time and space, but with the world's information streaming into the screens at Packer's poised fingertips, we are located in a kind of no-time, or all-time. The cosmos is pulled into the polis.

Pattinson well portrays Packer's sneer of cold command, the Hamlet-like nausea of youth surveying humanity and seeing nothing of value -- value in Packer's case being the unexpected. "I know, I know" is his post-millennial mantra and his psychic prison. As the odyssey progresses, Packer gradually loses his clothes, his security guards, his wife, not to mention his entire fortune, as his deeper quest becomes clear: an effort to discover "more, something I don't know."

Like the self-immolating protestors, Packer craves "all the meaning of the inflamed," the sun-scorched annihilation of Icarus. He seeks this destruction in sex -- appropriately depicted by Cronenberg as passionless and purely muscular -- the loss of his billions, and finally in a self-provoked assassination.

'No one hates the rich'

Much has been made of DeLillo's prescience, and so too this film's timeliness. But Cosmopolis is more than a blunt depiction of the soulless one per cent -- films of the Reagan era suffice for that. In this film, as Packer says, "No one hates the rich, because everyone's 10 seconds away from being rich."

Instead Cosmopolis depicts civilization's death drive -- and this is quite literally Packer's "death drive" -- operating on every tier. The protestors are not ennobled by their ideology. The poor are not graceful victims of oppression. Everyone is moving toward apocalypse: "The flaw of human rationality [is that] it pretends not to see the horror and death at the end of the schemes it builds." This is your mistake, Packer's, and mine.

The film's major failing was originally the novel's: DeLillo was unable to resolve the story in a satisfying conclusion. Likewise, in Cronenberg's adaptation the hard-earned tension amounts to strained and wearing dialogue between Packer and his assassin, a role attempted bravely but impossibly by Paul Giamatti. The effect is the same as many DeLillo conclusions, where the reader watches with dismay as the author fails to land a craft which was soaring just pages ago.

Nevertheless, Cosmopolis continues Cronenberg's purple period as a writer/director, which began with Eastern Promises and A History of Violence. Indeed, by framing the novel in his characteristically symmetrical, distancing lens, Cronenberg frequently finds passage where DeLillo met dead ends.