In the first episode of AMC's new reality series Comic Book Men, one woman appears on screen. That's right. In an hour-long show with countless penis jokes, a lengthy discussion of "hot" super-heroines and multiple homophobic gibes, only five minutes are given to a lone female character. 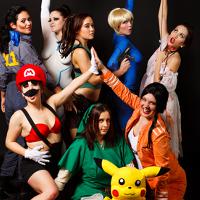 A corseted gothic woman with bleached hair and facial piercings, she enters the store to sell a Chucky doll from her beloved collection of Child's Play merchandise. The all-male cast of store employees does not mock her to her face, but the goofy background music indicates she's a comic figure -- a person so protective of a frivolous toy that she eventually decides she cannot part with it.

Afterwards, one of the men calls her "mentally ill," and another queries why no one "immediately threw a butterfly net over her and hauled her off." Just a few scenes earlier, the same men had been fawning over a boxed Six Million Dollar Man figurine. The irony is lost on them.

As the title of Comic Book Men suggests, the show depicts graphic novel fandom as an insular world dominated by male super-geeks. Set inside a New Jersey comic book store -- owned by Kevin Smith and called Jay and Silent Bob's Secret Stash -- the show follows three employees, Walt Flanagan, Michael Zapcic and Ming Chen, and one "customer," Bryan Johnson, who spends all his time hanging out at the store (and, judging by his yeti-like appearance, not nearly enough time on personal grooming).

AMC approached Smith, the writer-director best known for his 1994 cult favourite Clerks and for playing Silent Bob in many of his own films, to do the series in early 2011. The working title was Secret Stash, and a casting call went out to hire a woman to add to the all-male mix. A blogger named Zoe Gulliksen even shot scenes for the pilot episode.

But apparently the network decided that bringing in a female comic book geek was too farfetched.

"AMC, God bless them, said 'Well, that's not the reality of the show,' " Smith said at a January press conference. "So for season one we were less concerned with gender politics in nerdom, and (said) let's put forth a reality show. And this is the reality: these dudes work here."

So, for better or for worse, Zoe was out, and Walt, Michael, Ming and Bryan remained. Smith has generally shrugged off questions about the lack of female representation in the show, saying it's not his responsibility to represent the other 50 per cent of humanity. His message to female geeks? "Go and make your show, man."

Smith clearly sees Comic Book Men as a show for men, about men. Maybe it would have felt artificial to add a female cast member to a group of men who have known one another for decades. And maybe Smith isn't a nerd god responsible for representing women in comics. But "gender politics" aren't really something you can opt out of, especially when you call your show Comic Book Men. Despite Smith's insistence, his show doesn't exist in a vacuum. It's a part of comic book culture, and the way it represents women matters.

Still, many comic book fans -- male and female -- had high expectations for Comic Book Men. For a community whose passions are often derided and dismissed by the mainstream, the show offered an opportunity to let outsiders in; to celebrate the humour, drama and excitement of comic book culture that make it loved by so many people.

But instead of welcoming in outsiders through a fresh portrayal of graphic novel geekery, the show panders to the mainstream by giving them exactly what they expect. It paints an almost aggressively stereotypical picture of comic book nerds, portraying them as wannabe alpha males who claim their masculinity through haggling with sellers and ceaselessly picking on the most mild-mannered cast member, Ming Chen.

In short, every character is Comic Book Guy from The Simpsons. It's exhausting.

The most bullying of the bunch is Bryan Johnson, the yeti-like non-employee who also appears as Steve-Dave in several Smith films. In one scene, he and Ming compete to see who can sell the most at a flea market. Instead of fighting fair, he gleefully smashes some of Ming's merchandise. A passing senior citizen sees them and gives Bryan a tongue-lashing, demanding that he pay Ming back. Bryan begrudgingly forks over the bills. But as soon as the man walks away, Bryan's ego re-inflates and he bullies Ming into returning the money.

This sort of childish antagonism is a hallmark of reality shows. Cartoonish villains and heroes are familiar figures in unscripted television. Yet the audience is not really supposed to sympathize with Ming; he's a nebbish wimp, a target for sophomoric jokes about "wieners" and "metrosexuals." And Bryan is presented as a gruff yet lovable scoundrel. The heterosexual male pecking order is clearly on display here, even in a show about nerds.

The treatment of Ming, the only minority character, is just as telling as the show's lack of women. Comic Book Men revels in stereotypes rather than transcending them. Ming is mocked for wearing $200 jeans and compared to a little boy in a pinwheel hat -- even though, by anyone's standards, he's a completely average heterosexual male. He's married, has a short crew cut and doesn't look at all appearance-obsessed. But his ethnicity, combined with his relatively soft-spoken nature, makes him an easy enough target for cracks about sensitivity and weakness.

Much of the show revolves around sellers hawking merchandise -- like a "Pawn Stars" for geeks. Collectors bring in their treasures and store employees assess their worth. Some of these items are exciting to see, like an original Bob Kane Batman sketch, even if it is difficult to believe these sellers are coming into the store entirely at random.

The haggling that ensues is cast as yet another masculine competition, with the last man standing the one with the biggest cojones. In one scene, "pop culturist" Robert Bruce is called in to help determine a price for some horror film merchandise. There's no doubt Bruce knows his stuff. It is impressive to watch him casually undermine the seller through cold, hard pop culture knowledge.

As the seller leaves with his tail between his legs, appraisals of Bruce's male potency follow. "You could feel the machismo in the room, couldn't you?" Walt gushes, mouth agape. "Have you ever negotiated like that in front of your wife? That was a turn-on." In a commentary scene, Smith jokes that, in an ideal world, Bruce's knowledge of obscure subjects would get him laid. "Like, that would be something that women would find attractive," he quips. " 'You know a lot about stuff nobody likes about or cares about. I need to be with you.' "

There are some moments any comic book fan will enjoy: a debate on how exactly Batman came to have a sidekick called Robin, or a discussion about artist Jack Kirby's signature "Kirby dots." These sorts of detail-driven conversations celebrate what comic book fans love about the genre, without devolving into petty nerd bickering. They feel like a breath of fresh air amid long, musty sniffs of stereotypical basement-dweller B.O.

Maybe Smith shouldn't feel obligated to represent women in his show. Maybe he's allowed to argue that Comic Book Men is simply a "realistic" representation of his comic book store and the men who happen to work there. But to most graphic novel fans, the show exemplifies a reality that is unwelcoming and even harmful. It celebrates the casual male dominance that fosters sexism and misogyny in many mainstream comics.

Worse, it shuts out the fans who read comics that actually welcome alternative identities and sexualities. For many geeks, comic books are places where they can feel accepted for their deviance and weirdness. The heterosexual, white, male standard in this show is the very thing they hope to escape from.

Comic Book Men should have made viewers want to hang out at Jay and Silent Bob's Secret Stash. Instead, it makes you want to avoid eye contact and leave as fast as possible. In a world where too many people feel this way in comic book stores, it's a shame Kevin Smith didn't seize this opportunity to change their minds.