Lisa Cholodenko's The Kids Are All Right, a story about a middle-aged lesbian couple named Nic and Jules and their two teenage kids (conceived with the help of a sperm donor), is a film that is being talked up a lot lately. I have heard a number of people bill and coo, "Ooooh, you should go see it, it's really good." So in the interests of cinematic curiosity, I thought I will go see what all the fuss is about. 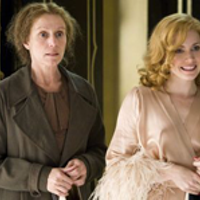 'Miss Pettigrew Lives for a Day'

The film is well written and well acted. The triangle of Annette Bening and Julianne Moore (who play Nic and Jules respectively) and Mark Ruffalo (Paul the sperm maker) are put through their thespian paces. Like the fine show ponies they are, they cross the finish line with colours blazing, sorrel, bay and palomino. The film is packed with proud displays of bravura emotional stuff, mixed with smaller, more subtle cues that denote character and intent. Cholodenko, sharing the writing credit with Stuart Blumberg, sticks to what she knows best, meaning a certain slice of California privilege, groovy, extremely well educated white folks, with a taste for nice linens and really good wine.

The two women live in a beautiful house with their beautiful kids and have all the problems that the upper middle-class endure, which are always of the relationship variety, it would seem. Their daughter Joni (named after the Mitchell) is about to move away to college, and their son (packing around the deeply unfortunate name of Laser) is exploring his more macho aspects, which means snorting drugs and roughhousing with a thuggish friend.

When Laser decides that he wants to meet his biological father and enlists the aid of his sister (newly turned 18), initially everything goes swimmingly. Paul, a gardener and restauranteur is everything that a teenager could want, roughly handsome, cool, and most definitely not a mother. The kids are into this new proto-parental unit, and before long they want to bring him into the family fold to meet their real mothers. Here is where things begin to get complicated, and that starts, as it usually does between men and women and women and women, in the sex department.

Which brings us to the bad news.

A certain smugness creeps into the corners of The Kids Are All Right. Morality doesn't have to mean Puritanism, but there is something of that here. It's in the two sex scenes where this quality becomes most explicit. One scene takes place between two women and the other between a woman and man. In the first, Nic (Bening) sits upright in bed, surrounded by silk comforters and purple pillows, her glasses perched on the end of her nose, squinting at the TV, where two shaved muscle men are pounding each other silly in good porn fashion. This sounds more louche than it actually is. Nic might as well be watching PBS for all the heat she gives off. Somewhere underneath the covers is Jules, a vaguely moving lump. It is about the most unsexy sex scene I've seen in a while.

Compare this to the later episode in which Jules and Paul tear each other's clothes off and hump like wild things. Certainly there is a difference between cheating taboo-busting type sex, and that which occurs with the sanctity and safety of marriage. (They don't call it the 'bonds of marriage' for nothing.) Part of the hotness of this latter encounter may be chalked up to its forbidden planet vibe, but there is an odd sexual squeamishness that occurs throughout the film.

At age 18, Joni plays Scrabble in her room with a male friend whom she obviously has an interest in. But despite the goading of her sexually obsessed girlfriend, Joni does little than chastely kiss her crush. So too, Paul's casual girlfriend who works at his restaurant is cast off with nary a backward glance when the possibility of a real family looms on the horizon.

Sex is serious stuff, is the underlying message, so don't mess about. Even Paul's decision to donate sperm is called into question, the question being whether he did it as genuinely altruistic act, for the money, or worse, because it was more fun than giving blood.

When Jules is called upon the carpet, made to admit her failure as a mother and a partner and plead mea culpa, I had a hard time not thinking, "Well, why not?! I would do it if I was in your position." This aspect of the film reminded me of Nancy Meyer's exercise in pain It's Complicated, in which Meryl Streep knocks serious boots with her ex-husband, and then has to beg for forgiveness from her whiny booby children.

There is something demeaning here, a certain type of castigation against female sexuality outside of the narrow confines of monogamy. This is not to say that because Jules and Nic are lesbians that somehow they ought to be afforded a degree of unconventionality, but they seem so straight in so many ways.

The film wants its cake and to eat it too. While it gently lampoons the culture of self-congratulatory, New Age therapy speak, plenty of sacred cows are left on the hoof. Cholodenko has a great deal of affection for her characters, as well she should since there are some autobiographical elements at play here. But this degree of intimacy is double-edged. It provides insight, but it is difficult to critique oneself with any degree of objectivity. The blow is always softened, and any more troubling issues are given cursory attention.

This is especially true in the more passive aggressive behaviour of both women towards anyone not of their class, be they Mexican gardeners or male sperm donor dropouts. There is a level of condescension that borders on snobbery. Paul is easy pickings, a good-looking man of a certain age, who is clearly "into himself." The loneliness, the fear of aging, the fragility of male vanity is all there, and while the filmmaker has some degree of sympathy for Paul's plight, he is also something of a tool, and I don't just mean in a purely functionary way. His lack of education, dirty hands, motorcycle and ability to work in the hot sun without a hat, mark him clearly as peasant stock. Coupled with his lack of regard for higher education, his job in the food services industry means he is working class.

But most troubling to any long-time married is that he is most definitely in touch with his animals urges. In fact, he touches them every chance he gets.

Nic and Jules and their lovely life of nice friends, nice house and good values must be defended from this mangy male interloper. Like a rogue lion, he is all hunger and desire, sneaking around the edge of the pride trying to be a part of things. It is up to the alpha member of the pride to run him off, a task that clearly falls to Nic as the father figure.

Bening plays her character a little like a Fred MacMurray knock-off. She is the authoritarian hard-ass who polices the household, getting her kids to write thank you cards, banning fun things like motorcycles, and controlling the money and the power. Whether she is undermining her partner or stomping around with her hands jammed in pockets, she is clearly the man of the house.

Free-spirit Jules with her long, red hair and pretty face is the wife who has to stay home, give up her job and be silly, ditsy and conventionally girly, whereas Nic, craggy, grouchy and demanding, comes across like a goddamn patriarch.

The fact that gender roles are so carefully delineated gave me pause.

A friend of mine argues that gay men and women shouldn't be subject to rules of the straight world quite as onerously as they sometimes are. I don't know whether I agree or not. Human feelings and failings are just that. But in The Kids Are All Right, it is home, hearth and heirloom tomatoes that are defended at all costs. Conventional order is re-established, the family unit is kept intact, and the interloper sent packing.

It would be more interesting, and perhaps more revolutionary, if the interloper was invited in, given a seat at the table, and offered a tomato, of any variety.