"For one human being to love another: that is perhaps the most difficult of our tasks; the ultimate, the last test and proof, the work for which all other work is but preparation." -- Rainer Maria Rilke 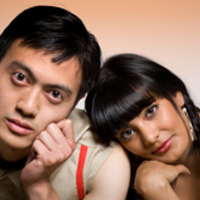 The last time I visited the Kootenays with my sister, we did our usual routine of driving for ten hours accompanied by a variety of film soundtracks. It was the same assortment we've been listening to since we were very young children -- My Fair Lady, West Side Story, Paint Your Wagon, and South Pacific. After we'd finished howling alongside Giorgio Tozzi's big orchestral climax that ends off "Some Enchanted Evening," my sister turned me and said, "This is why we're fucked up about love."

It was funny, and we both laughed, but her words sank into me. Had films, filled with impossible, glorious love affairs, so fundamentally altered our perception that we were simply not fit for the daily drudge of real relationships? Probably not, but it occurred me, driving down the Trans-Canada highway, that that my ideas about love and romance have certainly been coloured, deeply, by films and music. And when they're paired together, Mama, look out!

Since Valentine's Day is well nigh upon us, love is in the air. There is a load of lovey dovey films entering the theatres. For any couple looking to get goofed up on romance, the epistolary tradition is carried on in Dear John.

Seems Jennier Aniston wasn’t available, so this blond clone will have to do for When in Rome.

But then there is Valentine's Day, which may cause you to spontaneously off yourself on the day in question.

Or if you're really, truly desperate for love, you could watch yet another woman frantic to marry some dork in Leap Year, although I would strongly advise against it.

If you'd like to stay home and hide from couples wandering the streets, there are always the classics to tide you over, The Philadelphia Story, In the Mood for Love, some Nick and Nora, or my favorite romantic film of all time Adam's Rib.

All of this mushy stuff has me thinking about love -- the search for it, the lack of it, the essential mystery of the entire enterprise. It has made me think about how our changing ideas of romance are reflected on screen, whether it's warped and exaggerated, or flattened into mere commercialism. The business of love is already so complicated that movies only add another layer of crazy icing to what is a nutty, fruity cake. Still you must exercise some caution when viewing depictions of dewy mating pairs and swelling strings. They can seriously mess with you.

I am continually surprised by the unending stream of recent films that take as their central conceit the idea that all women really want is to get married. Even as marriage as an institution continues to be critically examined in many places, in the world of mainstream cinema, it's as if the 1950s never really left, or maybe the '50s simply bided its time and then came back with a vengeance.

Sandra Tsing Loh's recent series of essays about her affair and the subsequent end of her marriage in The Atlantic provoked a minor social furor. Women were surreptitiously sending each other the link, all around the Internet. But even as feminist thinkers and writers set about dismantling love and marriage, somehow the idea of romance keeps getting rebuilt in film form.

Various studies emerge and then emerge again, to tell us that watching too many romantic comedies is not good for anyone: that these films predispose women and some men to be unrealistic, to have ridiculous expectations.

I recently watched a documentary called Orgasm Inc., about the explosion in the female sexual dysfunction industry (yes, it has become an industry). One woman interviewed in the film embarked on a radical quest to achieve the mysterious and elusive vaginal orgasm, a process that involved running electrodes up her spine and connecting her to a jolt of electricity. Her story, illustrated by a montage of film clips of women in the throes of spontaneous climax, helped to drive the point home, as it were.

Another woman, whose face was hidden during her interview, almost bled to death after undergoing labial surgery. In many other parts of the world, the fight against female circumcision rages on, while in North America, the vaginal rejuvenation industry gets bigger (while actual vaginas get smaller) every year.

It is perhaps unfair to lay all of this angst and agony at the feet of the film industry, but there is definitely a role that is played by movies in shaping our expectations, our dreams and desires. I have it myself, thank you very much Rodgers and Hammerstein. Romance is now an industry, but it is also an industry built on illusion. The purveyors of romance have a vested interest in suspending people's rational minds and convincing them to buy the lie of happily-ever-after. Of course, distinctions must be drawn between sex and romance -- they are not necessarily the same thing, although they can be.

Whenever I wish to clarify my thinking on any topic, I call my mother. "What do you think about romantic love?" I ask her. To which she replies: "I think romantic love is largely an illusion. People have a very difficult time understanding the difference between sentimentality and genuine emotion, and the industry that has grown up around romance knows that. The first time I read a feminist book, I thought I've been lied to my entire life."

Losing your illusions is a very long process, and not always a pleasant one. The lie is more fun, infinitely more pleasant and pretty than the truth, its power resides in its seductiveness. You can know this and know it and know it, and yet... South Pacific can still make me cry.

In the opening five minutes of the film, an actor/producer is filmed doing things you probably ought not to contemplate, much less witness. He then assails the essential nature of the industry by explaining his role as mere power tool. "Women don't want to make out with you and shit, it’s fucking disgusting."

In Jaron Lanier's new book You Are Not A Gadget, he cites "pattern exhaustion" as an explanation for current cultural repetition and malaise.  Writes Lanier: "If you want to know what’s really going on in a society or an ideology, follow the money. If money is flowing to advertising instead of to musicians, journalists, and artists, then a society is more concerned with manipulation than with truth and beauty."