It's a familiar late evening scene in front of Vancouver's Cobalt Hotel. Amid clouds of rising cigarette smoke, long-haired revellers in dark clothes puff away before disappearing into the dimly lit haunt. Some years back, the Cobalt was converted from a strip club into the city's premier live heavy metal and punk rock venue. The only remnant of its previous life is a crudely wired sign over the entrance that's supposed to glow "Girls, Girls, Girls," but instead, due to neglect, reads "..., ...., G...." 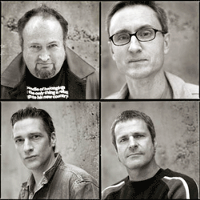 The Subhumans (and I) Evolve

Many of the women tonight look like they walked out of a Russ Meyer film starring Bella Lugosi and Vincent Price with the Misfits scoring the soundtrack, while a lot of the men are clad in camo shorts and black T-shirts with illegible, evil-looking band logos.

On any given night, some of the city's most passionate musicians, artists and music fans can be found inside quenching their thirst for cheap booze and loud, heavy, fast and sometimes downright weird music. Upstairs is a roach-infested, dangerous slum of an SRO hotel. Downstairs, people are anything but down, unless they've had too much to drink. Powerclown is on stage, a dirty Iron Maiden tribute performing in full clown makeup. The singer talks in a faux New Jersey accent and struts around arrogantly. It's hilarious, sober or otherwise.

But the heavy-metal honeymoon at the Cobalt will soon be over. The bar's famed proprietress, Wendy Thirteen, was served with an eviction notice by landlord Paul Sahota, well-known for his string of decrepit buildings. The Cobalt is winding down in style. There's a big show scheduled for September. 26th, when the Subhumans play. The poster for that one features Wendy punching out the Monopoly man. The last show will be on September 30. Wendy says it will by like the musicians playing as the Titanic sank beneath the waves.

Outside the bar, Wendy puffs away on a cigarette and chats up a married couple celebrating their third wedding anniversary at the bar. She turns and warns the soundman walking in of the "shitwater" spill inside, advising him to check the booth for any ooze. Landlord neglect, she says, has always led to "huge problems" running the place, although it's never made her love it any less. Underground music, she says, will always be on the fringe, never in the mainstream epitomized by the weekly cultural train wreck that is the Granville entertainment district, where scenes regularly unfold which could've easily inspired the hilariously disturbing blog and book, Hot Chicks with Douche Bags.

The eviction letter is prominently displayed on the front door for all to see, though she believes the city's soundproofing bylaws are to blame for her woes as much as are the landlords. Noise complaints from nearby new condos haven't helped either, leaving the Cobalt in an odd purgatory between Vancouver's old-brick grit and its new glass-and-steel, Olympic-branded façade.

"We're driven to places like [the Cobalt] because they don't give a fuck about the music. You think Granville would let metal shows happen or punk shows? No," Wendy says. "The only time they get those is big name acts... And you never feel welcome, you know?"

Other venues that host heavy metal shows simply don't measure up to the Cobalt. Pub 340 on Cambie Street in Gastown is small, and gets stiflingly hot. The Bourbon is big, but caters to a different crowd, playing dance-pop music like Britney Spears minutes after a metal band gets off stage.

"There are alternatives, but there's no replacement for the Cobalt itself," Cobalt regular Keith Forsey says.

'This is a legitimate place'

Ben Molavi, another regular and member of the band Morbid Surgeon, recalls a heavy metal show at Granville street's Plaza club, rebranded recently (not to mention pretentiously) as "The Venue."

"In between every band, they were playing the same Michael Jackson CD, over and over again," Molavi says. "They just don't know."

The show was before the King of Pop died to boot.

One notable difference between the Cobalt and other bars around town is its lack of security. It's not because it couldn't afford more security guards, like the armies of steroid-assisted gym-rats needed by other clubs around town. It just doesn't need them between Wendy herself, the one doorman, and the bar's tight-knit group of regulars.

"It's self-policing, pretty much," Wendy says.

Shiner, the long-time doorman at the bar, agrees. The loss of the Cobalt for him means he'll have to get "a real job," and for others, especially new bands, the loss will be one of opportunities.

"Guys learn how to play here," he says, in between stamping hands and taking cover charges. "This is a legitimate place where if you come and you get good here, people will take you seriously."

"You ask numerous bands around town, where did they start? They're probably going to say Wendy," he adds.

The Cobalt's tight-knit community also rallies firmly behind Wendy, he says, making her a linchpin in the music community arguably more important than any individual band or musician.

"She knows more people that come here on a personal level, it's ridiculous. If I let in for free people that tell me they 'know Wendy,' I would get five dollars a night."

"Without this bar, I don't know where I'm going to book shows anymore, and I don't know what's going to happen to the metal scene," she laments. "I'm upset about it, seriously sad about it."

The uncertainty about the fate of the city's so-called underground music scene has been somewhat relieved by the opening of the Rickshaw Theatre, which many see as a new oasis in Vancouver's bleak venue wasteland. But Larson says it reminds her too much of the Balmoral, a venue just down from the street from the Rickshaw near Main and Hastings. The venue was plagued by low turnouts simply because not many people, not even metal-heads, felt like braving the night of the living dead scene unfolding outside the place late at night.

The Rickshaw has some things going for it that the Balmoral didn't, such as its size and an all-ages component, although it's hard to imagine many parents dropping off their kids at Main and Hastings for a show. But much like the Biltmore Cabaret, save the hipster nightmare it often becomes (where the tightness of the pants is seemingly more important than the tightness of the band), if the Rickshaw keeps booking a solid mix of local and touring acts, there's no telling how successful it could be, because, as Wendy says, "Vancouver's fucked, like seriously fucked in the head," when it comes to how it treats its live venues and cultural hubs.

That hasn't stopped her though. Everyday, she counts down the days left on her eviction notice using status updates to keep up her more than 1850 Facebook friends abreast of the situation. Without a miracle, though, the Cobalt's cooked.

As the bar clears out after the end of Powerclown's second set, the first thing one sees upon exit of the Cobalt is the slick condo building across the street. At ground level is a well-lit, upscale showroom that looks like it got lost on the way to Yaletown. The sign on the window says you are looking at Futureliving.